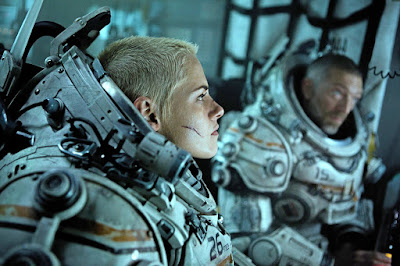 There are some people who have discovered the secret to a happy career. Daniel Radcliffe, for instance, never has to work again if he doesn’t want to. So what he’s doing instead are the projects that he really wants to do. An actor concerned with making money doesn’t do Swiss Army Man or Horns. The same is true of Elijah Wood, acting in low-budget horror movies, evidently for fun. Robert Pattinson has done some of this as well, although he is moving to some more high-profile pictures of late. And then there’s Kristen Stewart, Pattinson’s erstwhile squeeze and Twilight partner. She’s made her money and now she’s doing projects like Underwater because she can.

You know what? Good for her. She probably never has to work another day in her life if she doesn’t want to, so she’s taking risks. She did the same thing with Personal Shopper, acting in a very small movie that wasn’t going to get a lot of play because it was a good script and a good role (and she nailed it). Stewart may have to work for years to earn respect after her Twilight roles, but she’s doing so, and even if she never gets the kind of acclaim the career she is building deserves, she’s at least doing what she wants.

The truth about Underwater is that it’s perhaps not a great movie. It’s an interesting one, though, and it’s a fascinating choice for her. This is absolutely an action movie, and it’s also a horror movie, so it’s not the sort of fare that she is normally associated with. As the title suggests, this is a movie that takes place at the bottom of the ocean. That’s literally true in this case, since it takes place on and around mining rigs in the Mariana Trench. It’s six miles straight down, filled with bizarre creatures and staggering, terrible pressure. And, we soon find out, creatures that we never expected to exist.

We start with the action portion of the movie. Deep mining drill Kepler 882 is struck by what appears to be an earthquake. Mechanical engineer Norah (Stewart) runs to safety as the facility begins to shatter. She is joined by another worker named Rodrigo (Mamoudou Athie) and the two are forced to shut bulkheads, sealing the fates of several other workers. Knowing that the Kepler is unstable, they attempt to reach a series of escape pods, finding Paul (T.J. Miller) along the way.

Eventually, the locate the captain of the rig (Vincent Cassel), who informs them that the escape pods are gone. The quartet moves on, eventually reaching a control base where they find engineer Liam (John Gallagher Jr.) and biologist Emily (Jessica Henwick). With no pods available, the decision is made to walk across the ocean floor in pressure suits to the Roebuck, another deep mining drill, about a mile away.

I said above that there is a Lovecraft feel to this, and there very much is. I won’t go into detail here, but the big bad that we encounter at the bottom of the Mariana Trench is one that Lovecraft fans will know well. In fact, if you know your Lovecraft, the title of this review should give away the game.

Underwater wasn’t that well received when it came out, and I’m not entirely sure why. It is perhaps a bit too direct in where it goes. There’s not a lot of mystery here once things get going, so it may have simply lacked the subtlety that many people want in a film. Instead, it goes for straight ahead action, and it does this decently. In truth, the fact that it’s pretty simplistic is probably the biggest issue. It’s a good thriller, but it’s also pretty by-the-numbers. People get picked off from the survivor group at regular intervals and in a variety of ways. The moral choices that have to be made are the ones you expect.

There was promise in Underwater but not really enough there in the delivery. It’s a film that almost certainly looked better on paper than it does on the screen, and that’s kind of a shame, because I’d love it to start a trend in Lovecraftian horror. Maybe then we’d get del Toro directing At the Mountains of Madness.

Why to watch Underwater: It’s clearly Lovecraft-inspired.
Why not to watch: It stays too close to formula.

Posted by SJHoneywell at 4:44 PM