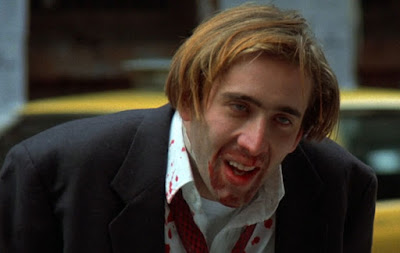 There is an entire online cottage industry of meme makers creating memes of Nicolas Cage in his various weird roles. Several of these—the crazy eyes Nic Cage, the Nic Cage with a cigarette and pointing—come from Vampire’s Kiss, a bizarre late-80s kind of horror movie/drug trip. Based on his career, Cage clearly has the ability to be engaging in a role and fantastic on camera. Leaving Las Vegas and Adaptation attest to that at the very least. But anyone who thinks his slide into the more sewer-y and bizarre end of the Hollywood kiddie pool is something new has never seen Vampire’s Kiss.

Seriosly, Cage had been unhinged multiple times in movie roles in the past, but I don’t know that he’s ever been quite as unhinged as he is in this. I honestly don’t know if Vampire’s Kiss was conceived of as a comedy, but it certainly became one based on the way that Cage acts in many a scene.

Peter Loew (Cage) works as a literary agent in a high-stress office. At the time the film begins, though, the biggest issue he is facing is a missing contract. One of his clients wants a copy of the contract for his first foreign sale, something that happened multiple decades in the past. Peter has looked for the contract in several places, but can’t find it. Instead, he gives the job to Alva (Maria Conchita Alonso). His harassment of her looking for the contract will be a large part of the movie that follows.

Anyway, Peter lives in a world of book contracts during the day and bars, booze, and one-night stands at night. One evening, after he takes Jackie (Kasi Lemmons, who has been in enough horror movies to almost qualify as a scream queen) home. As they’re getting busy, a bat flies into the room. Jackie runs out, and Peter attempts to get rid of the bat. He confesses later to his therapist, Dr. Glaser (Elizabeth Ashley) that fighting with the bat aroused him.

Eventually, Peter meets Rachel (Jennifer Beals) at a club and takes her home. She reveals her fangs and bites him, something that will happen multiple times over the course of the movie. There are hints that Peter, while not specifically hallucinating Rachel, has hallucinated their interactions. Soon enough, Peter is wearing sunglasses indoors, covering up the “bite marks” on his neck with a Band-aid, and acting stranger and stranger. His obsession with the missing contract intensifies and soon he’s assaulting poor Alva over it.

Unable to understand why his teeth aren’t growing in, Peter eventually goes out and buys himself a set of plastic fangs, which he uses to assault a woman in a disco. And eventually, Alva enlists her brother (Bob Lujan) after Peter assaults her, tears her clothing, and dares her to shoot him.

Here’s the thing—there’s a good movie lurking inside Vampire’s Kiss somewhere. The plot is an interesting one. It’s not really a vampire movie. Well, it kind of is. It’s a vampire movie in the same way Martin or The Transfiguration were vampire movies. It’s actually much closer to being a movie about obsession and growing insanity. The closest thing to it is probably American Psycho in how Peter’s strange behavior and belief is ultimately realized. The fact that he thinks he’s a vampire is probably less important to the actual plot than the fact that he goes full-blown crazy over the course of the film.

Cage is completely unhinged, though, and I don’t use that loosely. It’s as if he was given permission to simply do whatever he wanted after being given an unending supply of cocaine. A bigger issue is his accent. He comments toward the end of the film that he grew up in Philadelphia, but has lived in New York for years. Based on his accent, though, he is the child of British parents who spent half the year in the Hamptons and the other half of the year in Southern California. He never really pronounces the same word the same way twice.

Look, there are memorable and weird accents in movies. Benicio del Toro’s accent in The Usual Suspects is bizarre, but works for the film. Dick van Dyke’s accent in Mary Poppins is an embarrassment. Cage’s accent for this is simply indescribable, and not in a good way.