Against the Crowd Blogathon 2020

Film: The Killing of a Sacred Deer; Soldier
Format: DVD from DeKalb Public Library (Sacred) and personal collection (Soldier) on the basement television. 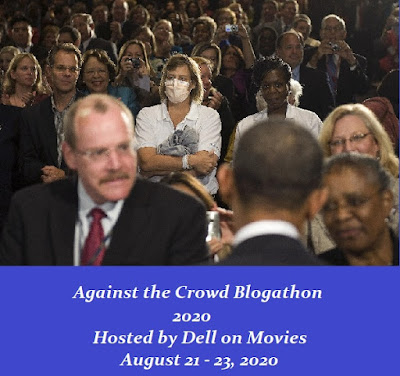 Every year, Dell over at Dell on Movies hosts several blogathons. Because this blog is fairly regimented in what it does, I don’t tend to participate in them despite enjoying them a great deal when I read through the various posts. I decided this year, as I come close to completing my Oscar lists, that I’d play as well. The problem was finding movies I knew would fit the bill for this blogathon. The idea is to find two movies. The first should be one I dislike that most people like while the second should be one I like that most people don’t. My issue was finding movies that fit this bill that I hadn’t already reviewed. I can make this blog as flexible as I like, but I won’t review the same movie twice. Still, there had to be movies that qualified, right?

For whatever reason, the world seems to love the films of Yorgos Lanthimos. I didn’t hate The Favourite, but much of this is because it’s the first of his movies where the entire cast doesn’t recite likes like they have a gun to their head. There’s a reason, I think, that Lanthimos loves Colin Farrell, who seems more than willing to say his lines as if he is reading out the contents of cells in an Excel document. Nowhere is this more evident than in the somehow-beloved The Killing of a Sacred Deer.

Plotwise, TKoaSD could be interesting. A doctor named Steven Murphy (Colin Farrell) takes a young, fatherless man named Martin (Barry Keoghan) under his wing, because he feels sorry for him. Martin soon ingratiates himself into Steven’s family, somehow charming them despite having the conversational skills of a drug-addled 12-year-old. Steven’s wife Anna (Nicole Kidman) and son Bob (Sunny Suljic) like Martin well enough while daughter Kim (Raffey Cassidy) somehow becomes infatuated with him. Meanwhile, Martin attempts to get Steven fully into his family by evidently attempting to start an affair between his mother (Alicia Silverstone) and Steven.

Suddenly, Bob is stricken with a mystery ailment. It turns out that, years before, Steven was operating on Martin’s father and, because Steven was drunk at the time, killed him. Now, Martin has developed some sort of curse ability that is going to cause all of Martin’s family to go through a series of stages before death. First, they will stop being able to use their legs. Second, they will deny food. Third, they start bleeding from the eyes. Then, finally, they die. The curse will be lifted when Steven ends it by voluntarily killing a member of his family.

There’s potential here for something really interesting. This could be a fascinating exploration into some very dark moral territories. Would Steven kill his wife, giving his children a chance for life? Will he kill a child since, as Anna tells him, they can have another one? Would killing himself end the curse? Sadly, we’ll never know, because evidently The Killing of a Sacred Deer wants to set up a situation and then resolve it by having the writer throw darts at a dart board.

There are a lot of issues I take with this film. The first is that everyone, and I do mean everyone, reads their lines as if they are reading through a menu. Barry Keoghan in particular has gone with the style of attempting to read all of his lines as if they were a gigantic run-on sentence all of which had to be said in a single breath before he gets to the period and he frequently doesn’t quite get there and has to (gasp) take a breath before the end. What kind of artistic choice is this to make people recite lines like a children’s Christmas show? I get that Lanthimos likes this (The Lobster is the same way), but it’s so off-putting, and not in a fun way. Why the hell would Kim be so desperate to run away with Martin while knowing that he is literally killing her and doing nothing to stop it when it almost certainly could? 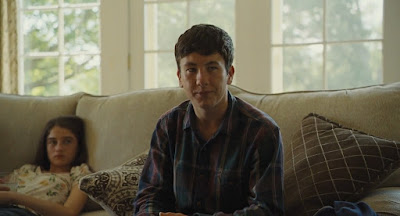 How existentially ugly is the world where a mother contemplates murdering a child because she can have another child? How pointless is life in a world where such things are discussed like taking out the garbage? Oh, I know that many will say this is a smart artistic choice and it’s where the film finds its meaning. Fuck that. It’s nihilistic and awful, and even the comical realization that Barry Keoghan looks like Paul Dano’s face Silly-Puttied into weird dimensions can’t save it.

And now we have the other side of the coin: Soldier. Pretty much everyone hates this movie, and probably aside from me, the people who claim to like it like it only ironically. It is objectively a dumb movie, filled with endless clichés and stupidity, and yet it has such high aspirations for itself. It’s lying in the gutter, but looking at the stars and thinking it can get there. Soldier is the little movie that thought it could but clearly couldn’t, and I love it for that failed confidence and audacity.

Before I talk about the movie, I need to talk about its director. In the modern directing world, there are three male directors named Anderson. First, there is Paul Thomas Anderson, Oscar-less despite eight nominations, and the kind of guy who seems destined to earn one someday. Second, there is Wes Anderson, the King of Quirk, who will almost certainly win an Oscar eventually for screenplay or for set design, or for just being the most twee bastard in Hollywood. The third Anderson is the one who almost combines their names to be far less than the sum of the parts—Paul W.S. Anderson, the director of Soldier.

Paul W.S. Anderson’s movies are clichéd and hacky. His best movie is almost certainly Event Horizon, which is honestly an underrated horror movie. Beyond that, his career highlight is that he makes video game-based movies (Mortal Kombat, Resident Evil) that are not as bad as those of Uwe Boll. Even when he has spectacle (Pompeii) he can’t resist the clichés. And that’s where we are with Soldier. There’s not a moment of this that isn’t telegraphed miles ahead. (It’s also worth noting that Anderson has been married to Mila Jovovitch for 11 years, so maybe he’s secretly a genius.)

But let’s talk about that audacity. Star Kurt Russell worked out for three hours per day for 18 months, taking no other projects, to buff up for this role. He was paid more than the film made at the box office. The film’s writer, David Webb Peoples, also wrote films like 12 Monkeys and Unforgiven. He wrote Blade Runner, and says that officially, Soldier is set in the same universe. Read that again: Soldier is a sister film to Blade Runner.

Anyway, rather than using replicants, the new vogue for the military (staring in 1996, based on the title cards!) is to select children from birth to become soldiers. They are trained exclusively to be soldiers and are trained in aggression, tactics, weapons, and more. Anyone mentally, physically, or emotionally unable to cut it is aggressively weeded out (it’s heavily implied at one point that a kid lagging on a run is summarily shot). Eventually, the soldiers—perfectly programmed to follow orders without question and to kill or be killed without complaint—are put into battle. In the opening sequences, we see the progression of a young child named Todd eventually become a highly-decorated soldier, and eventually morphing into Kurt Russell as Sgt. Todd 3465, with name and rank tattooed on his face.

Flash forward to a time when the soldiers are between conflicts. The next step, of course, is genetic engineering. Colonel Mekum (Jason Isaacs) proudly shows off his new team of pre-built soldiers featuring Caine 607 (Jason Scott Lee) as superior in every way to the old soldiers. A series of tests demonstrate this. This culminates in Caine fighting against Todd and two other older soldiers. Caine “kills” all three, but Todd is only mostly dead. The three corpses are loaded onto a garbage frigate and sent off into the galaxy.

Eventually, the garbage, along with Todd, are dumped on a garbage planet. Why the garbage ship has climate-controlled, atmosphere-filled compartments is anyone’s guess, but we’re not here to guess that kind of stuff. Todd finds a group of survivors on the planet who live by scrounging the junk and dealing with the planet’s hurricane-force winds. Despite these winds, they still seem to think it’s a good idea to plant crops outside. Anyway, Todd encounters survivors including Mace (Sean Pertwee) and his wife Sandra (Connie Nielsen) and their son Nathan (Jared and Taylor Thorne), who is mute because he was attacked by a snake or something. Also among the survivors are the awesomely-named Jimmy Pig (Michael Chiklis) and Paul Dillon as “The Guy Who Looks Like Neil Young.”

But, because we need our clichés, we’re going to have a training exercise where the new genetic troops are sent out to run operations. Guess which planet they go to. And if you thought that they’d be instructed to treat any survivors of any type as hostiles and wipe them out, you’ve seen this kind of movie before. And so, we’ve got Todd and a group of plucky survivors facing off against an entire platoon of genetic freaks led by a megalomaniac. His only assistance? His old commander (Gary Busey!), who does what he can to keep things reined in without even knowing he’s facing off against Todd.

Look, Soldier is a clichéd mess. I know that objectively it’s not a very good film, and I genuinely don’t care. You can pinpoint what’s going to happen before it does. You know who’s going to live and who’s going to die half an hour before it happens. There’s nothing about this movie that really works, and yet I love every stupid frame of it. I buy into just how audacious it really is. I love that it’s this aspirational, wanting to be paired with one of the greatest science fiction movies of all time.

It’s a joy watching it play out because you know how it’s going to play out. There are no surprises here, just inevitability, and yet that is what makes it worth watching. I know Soldier is dumb, and yet I love it unironically for that very reason.

Why to watch The Killing of a Sacred Deer: Everyone seems to love it.
Why not to watch: It plays like the darkest, most existential Christmas pageant ever.

Why to watch Soldier: It’s glorious in all the right ways.
Why not to watch: It knows it’s terrible and it doesn’t really care.