Film: War of the Worlds (2005)
Format: DVD from Sycamore Public Library on The New Portable. 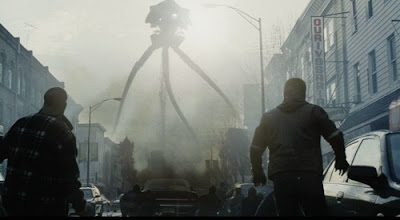 I suppose that when I think about it, it’s not terribly surprising that Spielberg did a remake of War of the Worlds. Now, in retrospect, it’s kind of a warm up for Super 8. While the plots are significantly different, there are some similarities between the two movies at least on the surface in that both are alien invasion movies. And, true to Spielberg’s fixation with absent or bad fathers, we’re going to get at least a part of that story in the form of the Tom Cruise character.

Ray Ferrier (Cruise) works a union job and is seen leaving his job site to return home. It’s evidently his weekend with his kids, teenage rebellious son Robbie (Justin Chatwin) and younger daughter Rachel (Dakota Fanning). Ray, we learn is something less than a model parent, and Robbie especially seems to resent the time that he’s forced to spend with his father. After a little bit of an introduction to give us the family dynamic, we dive head-first into the alien invasion that is the bulk of the story. I’ll say this for Spielberg’s version: we don’t spend nearly the sort of time the source material does setting things up. Instead, it’s pandemonium, lightning attacks, and chaos from about half an hour in to almost the end.

I’m not going to go into great detail here, because you probably already know the guts of the story, and if you don’t, you should. Earth is being invaded by technologically-advanced creatures from another world. In the H.G. Wells story, the aliens come from Mars. That’s never really determined in this version, since the opening sequences that involve flashes of light from the Martian surface that correspond with ship launches isn’t included here. Regardless, the aliens are attacking in gigantic tripod/walkers, blowing up everything they can with extremely powerful and unexplained rays. These rays cause massive destruction and also more or less turn people into dust when they are struck by them. It’s a cool effect.

Anyway, the bulk of the movie is Ray Ferrier and his kids running from New York to Boston in an effort to reconnect with the kids’ mother, Ray’s ex (Miranda Otto). Along the way, they’re going to be assaulted by other survivors, attacked by tripods, and run afoul of the military. Robbie is going to run off to watch the militia attack the tripods for “just because I need to see this” reasons. Eventually, Ray and Rachel end up in the basement of a house with sudden survivalist kook Harlan Ogilvy (Tim Robbins) where they discover that, once they stop turning people into powder, the aliens are harvesting them and using their blood to fertilize gigantic red weeds that now cover the ground.

There are a few things that War of the Worlds gets right. One is that there is very little down time. Our main characters don’t get a good deal of respite from the constant alien attacks, so neither do we. The effects are also as good as you’re going to find. The aliens are disturbing, and their weapons are worth the price of admission. Really, there’s a hell of a lot of action here, and that’s something that I appreciate a great deal.

Just about everywhere else I have a problem, though. Fortunately, a great deal of this movie is shit exploding and Tom Cruise yelling at everyone to “Run! Run!” in any direction. Unfortunately, that is almost always accompanied by the high-pitched keening of Dakota Fanning at just about everything that happens. I don’t know for sure, but I think about half of her dialogue is screaming or shouting for her father or brother about two octaves below dog-whistle range.

The movie also decides to Hollywood a lot of what happens. It just wouldn’t be Spielberg if we didn’t have some father/child trauma, and so a vast amount of the film is a sort of unexplained rebellion of Robbie from his father. Robbie, who is mid-teens in that he is old enough to know how to drive but does not yet have a license, frequently does things to put himself directly in danger simply because dads are stupid and dumb and stuff. This is frequently accompanied by alternate Tom Cruise shouting “Robbie!” and Dakota Fanning shrieking it at airplane-landing decibels.

A bigger issue is that the tripods seem to have been planted under the ground in the past. We don’t know when, but evidently it was a long time ago, and they happen to have been planted under places where humans built cities. And, despite massive infrastructure, including underground digging, none have ever been found. And these were planted so that the aliens could come back and wipe us out despite the fact that they could have alien planet-a-formed Earth millennia earlier.

The real problem is the ending. I don’t mean what happens to the alien creatures, because that is right out of Wells’s story. I mean something entirely different that belongs under a spoiler tag.

Robbie at one point runs off to follow the militia, as mentioned above. There’s no real reason for this other than “I have to see this” and the plot requiring that Ray be freaked out about the fact that his son would rather run head-first into a war zone than spend time with him. Had Robbie gone on to meet his fate, I would have found it an appropriate part of the story. But no, at the end when Ray and Rachel show up at Mary Ann’s parent’s house (that looks completely untouched), we learn that not only is everyone there safe and happy, but Robbie has made it home, too. Glurge.

War of the Worlds wants to be a science-fiction experience, and it is. It’s just an inconsistent one that should have been a hell of a lot better.

Why to watch War of the Worlds: Spectacle.
Why not to watch: It completely Hollywoods the ending.