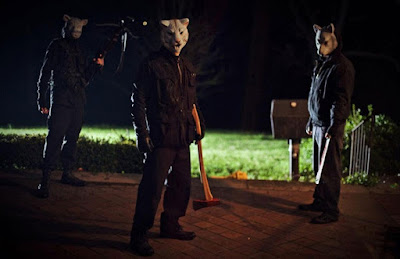 Home invasion movies, especially if you expand that subgenre to include movies like Vacancy, have experienced something of a renaissance in the past decade or so, but they’ve been around for a long time. Wait Until Dark is a home invasion movie, after all, and there are movies that have home invasion as an important plot point from decades before this. For modern home invasions, movies like The Strangers are a convenient template, but so is You’re Next. After all, You’re Next is not simply home invasion; there’s much more of a plot here than just people breaking in and killing indiscriminately.

But, at it’s heart, that’s what You’re Next is. It’s going to be a film where we start with a sizable cast that is rapidly and consistently whittled down to just a couple. It’s also a game of cat and mouse between the people in the house and the killers, who are rather terrifyingly disguised The Strangers-like, but with animal masks. They are, in no order, Tiger, Fox, and Sheep.

So, as with any horror movie worth its salt, we need to open with an introduction to what is happening. We see a mismatched couple (he is much older than she) finishing up sex. Shortly thereafter, he sees her dead body with the words “you’re next” scrawled in blood on a window. Startled, he recoils only to be killed himself.

Flash forward to the next day and we are introduced to the Davison family. The Davisons are wealthy enough to have a massive vacation home, and I mean massive—their vacation home is bigger than the house I grew up in and the house I live in now combined. Paul (Rob Moran) and Aubrey Davison (Barbara Crampton!) have arrived at the house, ready to celebrate their anniversary. Soon to come are their children and their partners. We have married couple Jake (Joe Swanberg) and Kelly (Sarah Myers); son Crispian (A.J. Bowen) and his girlfriend Erin (Sharni Vinson); youngest son Felix (Nicholas Tucci) and girlfriend Zee (Wendy Glenn); and daughter Aimee (Amy Seimetz) and her boyfriend Tariq (Ti West). At dinner, just as Drake and Crispian are starting to argue. The attack begins. Tariq is killed immediately with a crossbow bolt to the head and Drake is wounded as well. Everyone’s cell phone is jammed as well. The house is under assault with no way to get help.

What the attackers don’t know is that Erin, who is very clearly our final girl, has a few tricks up her sleeve. Specifically, she was raised on a survivalist compound. What this means is that she has been trained in protecting the house and improvising weaponry. And so, the battle is joined, with Erin doing what she can to keep other people in the house safe and not get herself killed in the bargain.

There are going to be a few twists and turns along the way here, and I’m not going to ruin them. They work really well, and over the last few minutes of the film’s running time, they come hot and fast. Up to that point, You’re Next deals out a constant stream of very bloody death.

This is one of the better aspects of You’re Next. In many a slasher, the killer doesn’t really do a great deal until the third act, where there is an explosion of violence and almost everyone who gets killed gets killed in roughly the same 20 minutes. That isn’t the case here. Once the attack starts, it keeps up, and the deaths happen pretty regularly throughout the film. I think the film hits a full baker’s dozen of bodies by the end, and with a running time of 94 minutes. If we leave out the credits, that’s a death about every 7 minutes.

What makes You’re Next work is not the inventiveness of the deaths (although a few are quite inventive), but the brutality of what happens on screen. This doesn’t pull a lot of punches. There’s a huge amount of blood in this film, and while there’s not a great deal of viscera or anything similar, the buckets of blood more than make up for it.

In truth, if you are not a horror movie fan, specifically if you are not a fan of the home invasion subgenre, there is not much here you will like. If you are a fan, chances are really good that you’ve already seen it. If you haven’t, it’s worth tracking down, if for no other reason than the fact that the body count and blood supply is nothing short of impressive.

Why to watch You’re Next: It’s aggressive and brutal
Why not to watch: It’s pretty nihilistic at the end.