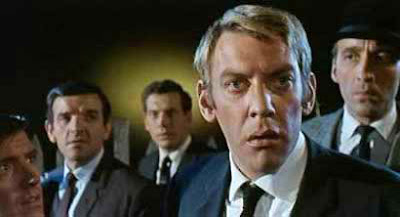 Anthology movies seem to be horror movies almost by default. I think that’s because you can tell a quick horror story and get people to care at least a little bit about the characters quickly. There’s a natural empathy for people put in danger, and that’s what horror is all about. Still, I prefer movies that have one main story rather than watching anthologies. Anthology films always seem to offer short shrift on the good stories and have too many stories that aren’t that interesting clogging things up. Even one that has a lot of heft behind it, like the awesomely-named Dr. Terror’s House of Horrors doesn’t have the heft it should based on the cast.

Our framing story takes place on a train. Half a dozen men end up sitting in the same train car. It turns out that one of these men is Dr. Schreck (Peter Cushing), which he tells the other men means “terror” in German. Dr. Schreck has a tarot deck with him that he claims will tell the future of each of the other five men, should they wish it. If you guessed that we’re going to get five stories, each one being the future of one of these men, well, you’ve seen the set up to an anthology film before.

In our first story, an architect named Jim Dawson (Neil McCallum) is headed to the Hebrides to do work on what used to be his family’s ancestral home. While there, he discovers the coffin of a man named Cosmo Valdemar, who was an old family enemy who placed something like a curse on the family. Jim discovers that it appears that Cosmo is rising from the greave every night as a werewolf and threatening or killing everyone around the secluded house.

The second story is about Bill Rogers (Alan Freeman), who will be returning home with his wife and daughter when he gets off the train. The cards tell him that his house will soon be the target of a new advance in evolution, a plant that protects itself and may even have the ability to kill without being detected.

Our third story introduces us to Biff Bailey (Roy Castle), a trumpet player and bandleader heading for a gig in the West Indies. He’s told that he’s going to sneak off to a voodoo festival and overhear a song being use by the worshippers. He’s warned against stealing the song, which belongs to the god, but Biff can’t help himself. Soon enough, and back in London, Bill finds himself the target of revenge from the voodoo god he was wronged.

Fourth is the story of art critic Franklyn Marsh (Christopher Lee) and the feud he has with an artist named Eric Landor (Michael Gough). When Landor fights back against Marsh’s criticism and it gets too personal, Marsh runs him over with his car. The accident causes Landor to lose a hand, and it would seem that his hand now has a mind of its own, and it’s fixated on revenge against Marsh.

Last but not least gives us the tale of Dr. Bob Carroll (Donald Sutherland), who, in the story, has just gotten married to Nicolle (Jennifer Jayne). He introduces her to Dr. Blake (Max Adrian), his colleague, and it turns out that Nicolle’s arrival is causing potential problems. More specifically, it appears that Nicolle is a vampire, and Dr. Blake appears to know something about it. In all five cases, the fifth card drawn, the one that is supposed to show these men how to avoid this situation, is the Death card.

The biggest issue here is that most of these fates seem really easy to avoid. For instance, in the voodoo story, all Biff has to do is not copy down the music that he’s hearing to avoid the revenge fate that happens to him. Literally all he has to do is not do the thing that is virtually guaranteed to make that future happen. If he doesn’t sneak off to the ritual or doesn’t write down the song, nothing bad happens. That’s far less an issue with the first story, for instance, but for the third story and a few others, the way out is to simply avoid the situation. Dr. Carroll doesn’t have to marry Nicolle. Franklyn Marsh doesn’t have to insult his rival.

It’s a fun little film, but the stories themselves don’t really belong in a movie. They would work far better as episodes of something like The Twilight Zone rather than as parts of a horror movie. Still, as anthologies go, I’ve seen far worse.

Why to watch Dr. Terror’s House of Horrors: Oh, that cast!
Why not to watch: There’s a really big plot hole here.