Stepping into the Twilight Zone 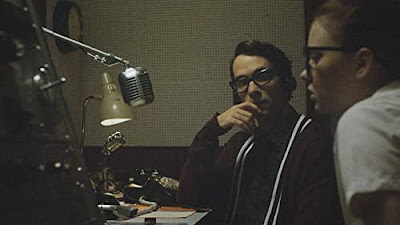 The newest edition of the 1001 Movies list is out. I can’t tell you what has been removed, but there are 10 new movies added. The collection is much more indie-focused this time, and with the exception of Tenet, none of the new additions is longer than two hours. I’ve reviewed three already: (Tenet, Soul, and Ma Rainey’s Black Bottom) and will be completing the rest of the list hopefully by the end of the year. The first of these is The Vast of Night, an odd little science fiction movie that at first blush doesn’t seem to belong.

The plot is one that borders on high concept. One late ‘50s night, in the sleepy little New Mexico town of Cayuga, a series of strange events happen. Teenage disc jockey Everett (Jake Horowitz) meets up with his friend Fay (Sierra McCormick). Fay, who clearly has a bit of a crush on Everett, has just gotten a new tape recorder, and the two of them test it out as they walk to their respective jobs. They also appear to be just about the only two people in town not at the high school’s basketball game. While Everett heads off to the radio station, Fay settles in for her shift as a phone operator.

And here’s where that high concept comes in. While she is working the switchboard and listening to Everett’s show, a sound cuts across the broadcast. Fay does her best to contact Everett. She plays the sound for him because it’s coming in over one of the phone lines and Everett plays the sound over the radio asking for anyone to call in with information. Soon enough, a call comes in from Billy (Bruce Davis). Billy tells a story of being in the military and hearing noises like that after helping in a top-secret project. He also says that everyone recruited for these jobs were Black or Mexican, probably to make them less credible to Eisenhower’s America.

When the call from Billy is disconnected, another call come in off-air. This is from Mabel (Gail Cronauer). Everett puts on a long set of music and he and Fay head to Mabel’s house. She tells them about encountering those same sounds. Even more, she talks about her missing son, who could be sent into a trance by a series of words. Mabel is convinced that they are being visited by aliens—something that fits with Billy’s story that those sounds sometimes come from higher than anything that had flown at the time. Mabil is sure her son was taken. She is further convinced that the aliens appear at times when most of the people in the area are convened in one place, like a high school basketball game; the aliens pick off the loners not at the event.

There’s a lot in The Vast of Night that is done well. This is a film that banks a great deal on its atmosphere. IMDb doesn’t classify this as a horror movie, but there are definitely horror elements. The scene involving Mabel’s story is dark and builds slowly. There is a sense of desperate tragedy, of a life destroyed by these unexplainable things, of a world caught in forces beyond our control.

One of the better aspects of The Vast of Night is how it is edited. We aren’t going to get jump cuts to create a false sense of urgency, drama, or action. Instead, we get long, protracted takes that last for multiple minutes, bringing us further and further into the story and building that atmosphere slowly and deliberately. We can sense the direction we’re going but we don’t rush there. We move there purposefully, letting that atmosphere grow and grow. It’s smart, because it credits us in the audience with having that patience and wanting things to build until the final payoff.

We also need to talk about the performances. While all of them are good, the two central performances are tremendous. A big part of this is just how well written the characters are. Within a couple of minutes, we know everything we need to about Everett and Fay. We can tell that Fay has a crush on Everett, that she wants her to notice him. Everett desperately wants to be cool, but he’s a couple of years behind the times thanks to his location. In his dream, he’s going to make it in New York, but he really knows he’ll probably not get any further than Albuquerque.

Jake Horowitz is good in this, but over and over again, this is Sierra McCormick’s movie. When those sounds first come in, she has to hold the screen and drive the plot. For minutes, she tries to determine what is happening, dealing with incoming calls and the increasing sense of disturbance and dread. It’s as good a five minutes or so as you’ll find anywhere.

The one thing that doesn’t work for me is the insistence that what we’re watching is an episode of a Twilight Zone-like show. Several times during the narrative we’re pulled out of the story to watch what is happening on a black-and-white television. I get the intent, but it’s misguided, and The Vast of Night would be better without it.

But that aside, this is a magnificent little creeper.

Why to watch The Vast of Night: The atmospheric nexus between The X-Files and The Twilight Zone.
Why not to watch: The conceit of this as a television episode either needs to be used more or dropped.