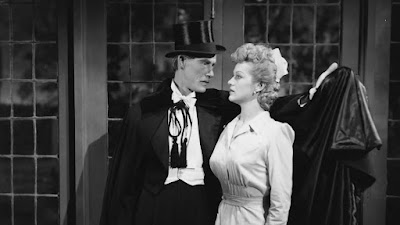 I’ve been slowly making my way through the Universal monster movies. Once you get beyond the classic original films for each of the monsters, the quality drops off a bit, at least in general. While there are some good follow-up films, most are an effort to cash in on the monster and the name. That’s absolutely the case with House of Dracula, the last of these from the Dracula collection that I have access to. The world of horror movie fans had become jaded enough that a bloodsucker wasn’t enough to bring the audience in. No, in addition to Dracula (played in this case by John Carradine), we’re going to have a wolfman (Lon Chaney Jr, naturally), Frankenstein’s monster (Glenn Strange), plus a mad scientist and even—to use the term the movie does—a hunchback.

And really, that’s the issue with House of Dracula. This film runs a lean 67 minutes, but packs in as many monsters as possible, meaning that most really don’t get their due. While Lon Chaney Jr. is a major part of the film, he’s only the Wolfman for a few moments. Strange’s Frankenstein Monster appears several times, but really only does much once, and Dracula is long gone by the time we get anywhere interesting. No, it’s the otherwise unknown mad scientist who spends most of the time chewing the scenery.

We start with Dracula finding Dr. Franz Edelmann (Onslow Stevens) and asking for help. He admits his vampirism, but wants to be cured of it. He appeals to Edelmann to help restore his humanity. Then, almost working against himself, it’s revealed that he found the doctor through the auspices of Edelmann’s assistant Miliza (Martha O’Driscoll). Naturally, this means that Miliza is already partially under the Count’s spell. Edelmann’s other assistant is Nina (Jane Adams), and it’s she who is going to be our kyphosis sufferer, because every eventual mad scientist needs an assistant with a physical handicap.

Anyway, Edelmann attempts to work his magic on Dracula, discovers Frankenstein’s Monster, and is also contacted by Larry Talbot in an attempt to reverse his lycanthropy. When he hooks himself up to Dracula in an attempt to cure him with a transfusion, Dracula takes over and reverses the process, giving Erdmann some of his own blood. Naturally, this does not go well, and soon Edelmann is having fits as he struggles with evil thoughts and a slow slide into vampirism (he start to fade in the mirror).

Like I said, there’s a lot going on here, and it’s far too much for a short movie like House of Dracula. To fully address all of the stories that come flying together wildly at the end, at least 15 more minutes was really needed (or 10, certainly) and a good 20-30 would be so much better for everyone involved. Give the characters a little space to breathe, bring them on for more than just a monstrous cameo.

The film is surprisingly progressive in terms of the character of Nina. Normally, a character with a physical disfigurement would be one of the monsters (and she is absolutely pictured as such on the poster) but she absolutely is not. Of all of the characters, with the possible exception of the always-sympathetic Larry Talbot, Nina is the heart and soul of the film, the one character who is absolutely good and pure, even forgoing being cured by Edelmann so that Larry Talbot can be cured first.

Naturally, pretty much everything goes to smash here because that’s the way these movies work. Once Edelmann has been infected by Dracula’s blood, he starts having spells of evilness that come and go, not unlike a Universal version of Dr. Jekyll. And, naturally when he is in these moods, he does bad things. It’s never really explained why Dracula, who is supposed to be looking for a cure for his vampirism, acts like this. Evil is as evil does, evidently.

Ultimately, I found this disappointing. There are too many ideas here and not enough film to cover them all. As such, everything is more or less half-assed and nothing is that satisfying.

Why to watch House of Dracula: A surprising take on what would normally be one of the “monsters.”
Why not to watch: Too many ideas; not enough film stock.