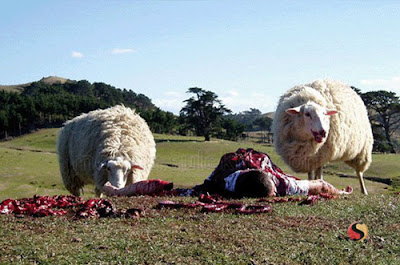 In the world of creature features, there must be an unofficial contest to see who can make a movie with the weirdest or least frightening creature. Squim (worms), Night of the Lepus (rabbits), The Killer Shrews, Frogs, Ticks, Attack of the Giant Leeches and more vie for the title, and into that world comes Black Sheep from 2006, not to be confused with the Chris Farley movie of the same name. In the “goofy animal horror” subgenre, Black Sheep has two things going for it. First, unlike the movies on this list that play things straight, this is clearly a comedy. Second, at the very least, sheep have teeth that could do some damage.

We start in the past, when young Henry Oldfield (Nick Fenton initially, then Nathan Meister for the rest of the film) is dealt a terrible double shock. First, his horrible brother Angus (Eli Kent, then Peter Feeney) has killed his pet sheep. As he recovers from that shock, he learns that their father has fallen to his death over a cliff. This creates a terrible fear of sheep in Henry that he is now having to face as he returns to the family farm. He has decided to sell his share of the farm to his brother and never deal with it again.

But things aren’t so normal on the Oldfield family farm. Angus has been doing some experiments on the sheep, hoping to create a new breed. In a manner reminiscent of 28 Days Later, a couple of activists break onto the farm to see what they can find out about the place. Grant (Oliver Driver) manages to get away with what looks like a fetal sheep that is somehow still alive. It bites him, and we will soon see that the infection the bite creates makes Grant a sort of…weresheep. His partner in crime, Experience (Danielle Mason) ends up running into Henry and farm worker Tucker (Tammy Davis) and figuring out with them that something is very wrong with the sheep.

And that’s really the story. The sheep are carnivorous, and their bite turns anyone bitten (who survives at least) into a human-sheep hybrid monster. Henry, Experience, and Tucker all try to figure out what is happening while Angus plots evilly and evils plottingly as he prepares to unveil his new breed of sheep to a crowd of agricultural executives.

Black Sheep is exactly what Peter Jackson would be doing if he didn’t have a 20+ year career of making things like the Lord of the Rings movies. There’s a lot of Bad Taste and Dead Alive in this movie. A big part of that is the comedy, which is as much a part of this as the horror. The second part of this is the fact that, sheep or not, Black Sheep does not hold back on the gore. There’s viscera and guts aplenty here, especially when the sheep come a-rampaging down the hill and attack the press conference. Limbs go flying, intestines get yanked out, and more. It was unexpected, a little shocking, and still pretty funny.

What Black Sheep isn’t is that original despite the animal causing all of the terror. The gore was a bit of a surprise, but not a lot else really was. It’s a comedy, so you can expect a lot of fart jokes (Experience is an activist after all and is dead set against methane production). You can also expect exactly the sheep jokes you would expect. Yes, exactly that kind of joke. It is not so much hinted around as stated directly that Angus Oldfield donated DNA to his sheep project both indirectly and directly.

Black Sheep is fun, though. It’s goody enough and irreverent enough to be interesting without being too terribly offensive in any way other than viscera and sheep fucking jokes. The ending, both the actual ending and the short coda at the end, are ridiculous and the sort of bastardization of science that is typical for this genre.

If you’re a fan of the tradition of New Zealand splatter comedy, Black Sheep is right up your alley and you’ll enjoy it. If you didn’t laugh at Dead Alive, you’ll be bothered by this one just as much.

Why to watch Black Sheep: If Peter Jackson were just starting out now, this is what he would be making.
Why not to watch: It would be the most upsetting double feature with Shaun the Sheep possible.