Ten Days of Terror!: The Vault of Horror

Films: The Vault of Horror
Format: Internet video on Fire! 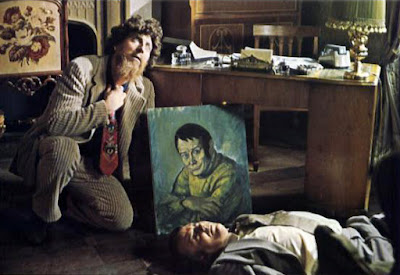 Did you know there was a sequel to the early ‘70s film Tales from the Crypt? I didn’t. I thought The Vault of Horror was just another anthology film, but it was also released under the titles Further Tales from the Crypt and Tales from the Crypt II. Even without that knowledge, though, you shouldn’t be surprised at where this is going. We’re going to get a quintet of short stories with a framing story that will be what we think it’s going to be. The stories themselves are going to come directly from the pages of EC Comics.

In fact, that’s one of the oddities here. “Vault of Horror” was the name of an EC Comics horror anthology comic, but most of the stories here come from “Tales from the Crypt.” Ultimately, that doesn’t really matter, but makes more sense that this was originally pitched as a sequel to the original movie not just in content but in name.

The framing story is precisely what is expected, because it follows a very similar pattern from the first movie. Five men get into an elevator on their way to the ground floor of the building they are in, but instead, the elevator takes them to the sub-basement. They leave the elevator and the door closes behind them, and there is no way for them to call the elevator back. Instead, they all sit around a table that appears to have been prepared for them. There’s booze and classes and five chairs—it looks like it’s been set up for some sort of secret cabal meeting, but instead, we get these five knuckleheads.

First up is “Midnight Mess,” told by Harold Rogers (Daniel Massey). In his nightmare, he hunts down his estranged sister (played by his real-life sister Anna Massey), who has been named as the sole heir to their late father’s estate. Rogers, of course, isn’t there to give her the good news, but to kill her. But it also seems like there’s a vampire problem in the town.

Second is “The Neat Job,” the story of Arthur Critchit (Terry-Thomas). In his nightmare, he has finally married, but his new wife (Glynis Johns) has trouble keeping things in the house up to his standards. Nothing she does ever seems to be good enough for him, and eventually, that’s just going to be too much for her.

Our middle story is “This Trick’ll Kill You.” Magician Sebastian (Curd Jurgens) and his wife/assistant (Dawn Addams) are looking for new tricks in the bazaars of India, and doing the best they can to spoil the tricks they already know. Eventually, they see a young woman performing the classic rope trick, but this is one they don’t know, and they go to extreme lengths to add the trick to their act.

Fourth is “Bargain in Death,” told by Maitland (Michael Craig). His is a tale of insurance fraud. He plans with a friend (Edward Judd) to fake his own death with a chemical that will put him into a deep trance that will not be detectable by doctors. The plan is to collect the money and then have Alex dig him up. But there may be other plans as well, including the need of some of Maitland’s medical student neighbors to have a body to practice on.

Last but not least is “Drawn and Quartered,” the story of Moore, a painter living in Haiti. While doing the Gaugin thing in the tropics, he learns that his paintings that have been universally panned by critics are now selling for huge prices back in London—specifically because the people who panned him are now touting his work as revolutionary. Moore wants revenge and goes to Voodoo to get it, and soon whatever happens to his paintings happens in the real world. The fact that he’s just painted a self-portrait won’t be important, right?

The Vault of Horror is exactly what you expect it’s going to be. The tales are entertaining for what they are and don’t go too long, but you’re also going to guess the ending of most of them. It’s also surprisingly tame in so many places. When one person in the final story has his hands lopped off (you know it’s coming), the blade that does so must have been super-heated, because he pulls back perfectly cauterized stumps.

The Vault of Horror is ridiculous, but it’s a fun kind of ridiculous. It’s not quite as good as Creepshow, but it’s very much in the same vein.

Why to watch The Vault of Horror: It doesn’t overstay its welcome.
Why not to watch: You know exactly where all of these stories are going.