Ten Days of Terror!: The Evil of Frankenstein

Films: The Evil of Frankenstein
Format: DVD from Nippersink District Library through interlibrary loan on The New Portable. 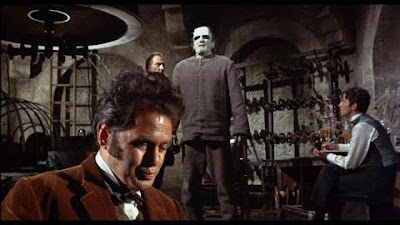 As a teacher, I don’t let my students use Wikipedia as a reference. That said, I use it all the time myself for this blog. It’s handy for checking plot points when I go through these posts, making sure I know who was who and who did what. That habit causes me some interesting realizations now and then. When I looked up The Evil of Frankenstein on Wikipedia, I discovered that this scant little 84-minute movie was packed with a surprising amount of stuff. The plot summary is ten paragraphs long. What this means is that I’ll be condensing quite a bit, because no movie with this short of a running time needs to have that much stuff going on in it.

We open on a body snatching, where the body snatcher takes the corpse to none other than Baron Frankenstein (Peter Cushing) himself. Working with Frankenstein is his henchman/assistant Hans (Sandor Ellis). Frankenstein removes the heart from the corpse, hooks it up to machinery, and soon enough he’s got that heart a-pumpin’ on its own. Sadly for him, a local many of the clergy shows up in his lab and starts trashing the place. Dr. F. just can’t catch a break, so he and Hans run off. It’s here that we get a long flashback about Frankenstein’s attempt to create the monster (played both in the flashback and the current time by Kiwi Kingston). It was kind of successful, kind of not, and his monster goes on a loopy ol’ monster rampage and eventually the Baron is run off.

Anyway Baron Frankenstein and Hans are going to wind up back in the Baron’s old stomping grounds where he’s going to once again run afoul of the law, discover that his house has been raided by the local burgomaster, and find the perfectly-preserved body of his old creature just waiting to be revived to live once again.

The big turn in the plot comes not from Baron Frankenstein returning to his old stomping grounds nor from him confronting the corrupt burgomaster and chief of police who ran him out of the area originally. No, it happens when Frankenstein and Hans encounter Zoltan (Peter Woodthorpe), a hypnotist. Frankenstein manipulates Zoltan to help recover the mind of the creature, but Zoltan, being the real foil in the film, uses this opportunity to more or less compel the creature to listen only to him. And, since Zoltan was booted from the same area as Frankenstein and has the same people he wants to have vengeance on, things soon get out of control.

The Evil of Frankenstein is, honestly, a pretty bog-standard Hammer horror movie from the era. It’s Gothic in exactly the ways you expect it to be and in the way that both most Hammer films and a great deal of American horror films of the era were. Most of the budget seems to have gone to acquiring the services of Cushing and on sets and costumes, and just enough on writing the script to have a beginning, middle, and end.

That sounds like a complaint, but it really isn’t. There’s a particular joy to a film like this one, and I admit that this sound condescending, but the best one-word description is “quaint.” It’s not anything close to scary, but it’s probably not really intended to be. It’s not thrill ride scary, but sort of carnival funhouse “scary.”

I hate saying things like, “If you like the genre…,” but it applies here. This is a solid mid-‘60s “horror” movie. If that’s the sort of horror movie you enjoy, this one is right in the middle of that wheelhouse. It won’t convert anyone to liking the style and for those who like the style, it’s perfectly enjoyable.

Why to watch The Evil of Frankenstein: You can cut glass with Peter Cushing’s cheekbones.
Why not to watch: The third act goes loopy.