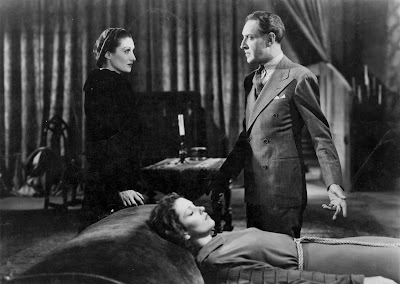 Depending on how you count things, Dracula’s Daughter is either the second or third film in Universal’s Dracula series. It’s third if you count the Spanish-language version of the original, and honestly, you really should because it’s great. For the English-speaking public, though, this is the second film, one that follows Dracula directly, even though this was released a good half-decade later. It’s an interesting idea more than it is an interesting film. It genuinely could have been a great film, one that matched the original, but didn’t quite have the vision, budget, or length to pull this off.

We pick up immediately follow the death of both Dracula and Renfield, with the bodies being found be members of Scotland Yard. We’re not so much worried about connecting this to the original film in anything more than having Dracula be dead. The body is discovered with a stake through the heart, and is carted off to the closest police station. Dracula’s killer, Professor Von Helsing [sic], admits to the crime but also says that he’s innocent of murder since his victim has been dead for 500 years. In his defense, he calls for a former student of his, Dr. Jeffrey Garth (Otto Kruger).

Meanwhile, a mysterious woman (Gloria Holden) shows up at the police station and wishes to view the bodies. The cop on duty won’t let her in, so she hypnotizes him and steals the body with the assistance of her servant Sandor (Irving Pichel). Soon after, she carries out a ritual that ends with her burning the body, hoping for an end to a curse. She is convinced that she is free of this curse, but Sandor is convinced of the opposite.

Now, we’ve got to get all of these people together. The mysterious woman is revealed to the audience as Countess Marya Zaleska. She meets Dr. Garth and hopes that he might be able to help her with his psychology. See, while the people of London don’t know this yet, the audience is more or less being told that Countess Zaleska is a vampire herself, and what she is fighting against is that nature. She is of the opinion that Garth can help her overcome this through force of will or something—it’s honestly not that clear.

The last person that really needs to be thrown into the mix is Janet (Marguerite Churchill), Garth’s assistant and foil. The two have a very antagonistic relationship, her teasing him and more or less working to shoot down any romantic rival who might wander into the frame. He, on the other hand, is constantly annoyed by her and is always on the brink of firing her. Allegedly. If you think that the two are actually a matched pair and will end up as our romantic relationship, well, you’ve seen a movie from 1936 before now.

In truth, there’s something like a love quadrangle. Countess Zaleska is fascinated with Jeffrey Garth and decides that if she can’t be cured, she’ll make him a vampire and force him to stay with her for all eternity. She also decides that the best leverage for this is Janet, who is just as clearly crazy for Garth as well. But then there is also Sandor, who seems to push his mistress into the path of evil over and over, and who is clearly hoping that she’ll remain a vampire and give him the immortality that he has been promised.

There’s a lot here, and with another 20 minutes or so, this could have been a great film instead of just an entertaining and decent one. The ideas here are very interesting. It would have been nice to have a better leading man than Otto Kruger. Kruger was better suited to the kinds of roles he played in Murder, My Sweet. He’s the creepy guy who wants to control and dominate the damsel in distress, not the love interest for two women. For their part, the women are the best part of the film. Gloria Holden is exotic and strange and beautiful in a kind of “look but don’t touch” way. Marguerite Churchill is the opposite, and is also surprisingly modern. She could appear in a current film and not look too out of place.

I appreciate the attempt here. Dracula’s Daughter takes some very weird liberties with the vampire myth, though. Our Countess is undead—she’s already died and come back as a vampire. The idea that she could just…overcome that…by force of will is bizarre in the extreme. I get why the film goes there, but there have to be better ways to get us to that potential plot point, don’t there? Something scientific rather than just the equivalent of trying really hard?

Nonetheless, while this can’t hold a candle to either the original film or to the Spanish-language version, it’s a fun addition to the Dracula canon and it’s worth tracking down.

Why to watch Dracula’s Daughter: An interesting idea to carry on the Dracula story.
Why not to watch: It’s far too short for what it could be.