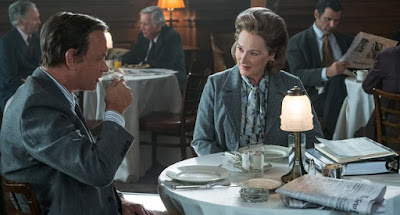 I feel like I’ve been slacking lately, and that’s not a hard conclusion to come to when you look at my posting history for this month. It’s not that I’m coming to the end of things; it’s more that I’ve been unbelievably busy for the last several weeks especially. I have a daughter who is a week away from moving. There have been some extended family issues I won’t go into here. And I’ve been screamingly busy at work. I know everyone says that, but where I teach, we’re given a specific number of classes we’re supposed to have every quarter. Right now, I have the equivalent of that plus two. This being the case, it’s taken me a week to finally sit down with The Post, the first movie I’ve watched nearly seven days.

I have to say that this isn’t the movie I expected, or at least not the story I expected. I knew this was about the Washington Post, and I thought it was about the Watergate break-in. I wondered about that, considering that we’ve already got All the President’s Men and certainly don’t need another version of the same story. Thankfully, The Post is about the time just before that, the moment that made the Post a national paper just before Woodward and Bernstein cemented it into place.

So let’s get into what’s going on. As the film starts, Katharine “Kay” Graham (Meryl Streep), who is now in charge of the Washington Post following the suicide of her husband. Finding that the paper is cash poor, Kay plans to take the paper public with the assistance of her advisor Fritz Beebe (Tracy Letts). At this time, the Post was considered by many to be something of a second-tier paper in terms of size and circulation. Ben Bradlee (Tom Hanks) had recently come to the paper and started to shake things up.

At the same time, the New York Times has suddenly begun running stories on what would be known as the Pentagon Papers, the sort of story that might happen to an important paper once per decade. Bradlee is more than desperate to find out the story. As it happens, the story is a terrible one. Former advisor and military analyst Daniel Ellsberg (Matthew Rhys) walked off with a copy of the 7,000-page document and photocopied it before passing it on to the Times. After a couple of days, the Times is hit with an injunction from the White House to prevent any more information—all of which suggests that the U.S. continued to funnel money and troops into Vietnam despite knowing they could not win—from being printed.

As it happens, Post reporter Ben Bagdikian (Bob Odenkirk) knew Ellsberg from their time at Rand, and suspects that Ellsberg is the leak. He contacts him and suddenly the Post has the bulk of the Pentagon Papers, too. The question is whether or not they can print the stories. With the injunction against the Times and the fact that the source is almost certainly the same, printing the story could put both Bradlee and Kay Graham in contempt of court and land both of them in prison. An additional problem is that the banks have a one-week clause in the public offering of the Post that allows them to back out if there is a catastrophe. The jailing of the owner and editor would certainly qualify.

The Post is a fine film, but I have to wonder why it earned the nominations it did. Once again, Meryl Streep earned a nomination for a role because she’s Meryl Streep. She’s clearly the best actress of her generation, but that doesn’t mean that she needs to be nominated every year. She’s also off screen for a huge percentage of the time, and while she is a central character, it’s difficult for me to suggest that she is somehow more important to the story than Tom Hanks or even Bob Odenkirk.

The Post is interestingly cast. In addition to Odenkirk, the other half of Mr. Show, David Cross, is here as well. Neither of these guys would normally show up in anything like a drama, but both are very good here. In fact, the entire cast is very good. But I can’t help feel that there’s something missing here.

I understand why The Post was made, and I’m mildly impressed that this was a Spielberg film, since it doesn’t really feel like one. With the current attacks against the press, a film that reminds us that a free press is an important element of freedom and democracy is a good thing.

And yet so much of the film feels oddly flat. I want to like this, but I can’t help but compare it (unfavorably) to All the President’s Men. And that being the case, no matter how much I might love Tom Hanks, Jason Robards will always be Ben Bradlee to me.

Why to watch The Post: A reminder of the importance of a free press.
Why not to watch: It feels underwhelming in some respects.