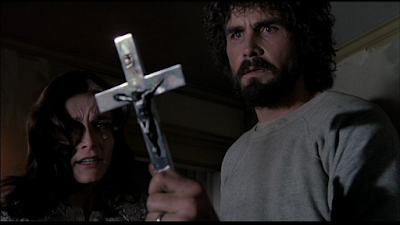 There have probably been stories of haunted places for about as long as there have been stories in general. Tons and tons of horror stories and horror movies have dealt not with the idea of evil people or entities, but have instead dealt with the concept of evil places, places that are “born bad” to put it in the parlance of Shirley Jackson’s The Haunting of Hill House. While there are many of these stories, probably the best known of the genre is The Amityville Horror, which takes a page out of the playbook from The Exorcist as well as The Haunting. In this case, we have a house that was not merely born bad but that is alleged to be literally possessed by Satan himself.

The film starts as the Lutz family movies into the house in question. They’ve gotten the house for a song because it was the site of a previous mass murder; the oldest son of the previous residents slew his parents and younger siblings, blaming it on voices that he heard from the house. It’s not long before the house itself starts to demonstrate that his claims of hearing voices might not just be looking for an insanity plea.

While the house seems to affect everyone in the family, it focuses its attention on father, George Lutz (James Brolin), affecting his wife Kathy (Margot Kidder) and her sons from a previous marriage much less directly. George is immediately taken ill and begins acting strangely. No matter what is happening inside the house, George is always freezing and begins to obsess over the fireplace, constantly chopping firewood and feeding the fire. He neglects his business, no longer paying bills or signing payroll checks.

The other person who seems to fall under the spell of the house is Kathy’s daughter Amy (Natasha Ryan) who suddenly has an imaginary friend once they have moved into the house. It’s also soon evident to the audience at least that Amy’s imaginary friend might not be so imaginary. Kathy starts to have nightmares that contain details of the murders of the previous tenants. More disturbingly, George seems to start waking up every night at 3:15, the time when the murders occurred.

As the audience, we learn quite a bit more about the house than the tenants do initially. This comes from an early scene in which a local priest, Father Delany (Rod Steiger) attempts to bless the house and is repulsed in part by voices telling him to leave. Father Delany does what he can to get the church involved in exorcizing the house to no avail; he is looked at as if he is crazy by the church authorities.

The Amityville Horror is considered a classic horror movie by just about every metric, and yet it’s also one that I don’t see or hear talked about that often. I think there are reasons for both of these facts. In the first case, it’s hard to think of a more quintessential haunted house film with the possible exception of The Haunting. In the second case, it’s surprisingly dull. Aside from the scenery chewing of Rod Steiger (and there are a few moments of monumental hamming on his part), The Amityville Horror is slow and has an amazingly low body count. This in and of itself isn’t so much a serious problem, but it does strike me as odd for a film that wanted in some ways to compete with people’s memories of films like The Exorcist.

That, more or less, is my issue with The Amityville Horror. It feels like a lot of build-up for a movie that ends up paying off for about 10 minutes at the end. Since the film runs just under two hours, that’s a ton of having things build for the payoff. And when we get there, the payoff isn’t that great. It’s nothing that you haven’t seen before. I think there’s some evidence that these last few minutes might well have influenced a movie like Poltergeist in significant ways.

The truth is that I wanted to like The Amityville Horror a lot more than I actually liked it. There are inklings of a good horror movie here, and moments that really work. Rod Steiger steals every scene he is in, which is a joy. It’s also worth remembering just how engaging of an actress Margot Kidder could be. But ideas do not a horror movie make, and ultimately, I find myself disappointed. 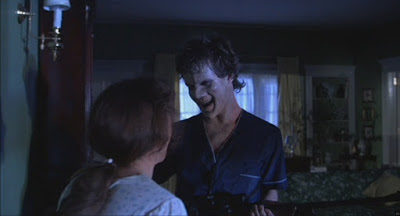 That being the case, I was a little more leery heading into the sequel, Amityville II: The Possession. Right off the top, there are serious questions that need to be answered with this film. Because this is a film that plants flags in several different places, it’s almost impossible to really understand what it wants to be. There is good evidence that this is a prequel to The Amityville Horror, except that this isn’t clear and there are significant differences here from what the first movie sets up. If it is in fact a sequel, it depends on the most staggering coincidence outside of a Charles Dickens novel, which means it doesn’t really work as a sequel, either.

We’re going to be hanging around the same house here, and just like in the first movie, we start with a family moving in. Once again, it’s a sizable crew. The Montellis are, evidently like everyone who moves into the possessed house of Amityville, good Catholics, at least in part. And, like any traditional Catholic family, we have more than our share of kids. Anthony Montelli (Burt Young) isn’t much of a Catholic and also isn’t much of a decent guy, since for much of the movie he is abusive to his wife and kids. His wife Dolores (Rutanya Alda) is very much a devout Catholic and would like for her children to be as well. Those children are Sonny (Jack Magner), Patricia (Diane Franklin), Mark (Brent Katz) and Janice (Erika Katz). Of all of them, Sonny seems to most troubled, a fact that the house will soon pick up on.

At this point, you pretty much know the drill. The house is possessed by terrible evil, which starts to manifest almost immediately. In one scene, paintbrushes literally float up in the air and paint a slobbering wolf on the wall of Janice’s room while she and Mark watch—a far clearer manifestation of possession with multiple witnesses than we get in the first 90 minutes of the original film. The evil force eventually settles on Sonny, though, finding him to be fertile ground for the creation of evil.

What kind of evil? Well, for starters, he stays home while the family heads off to church. This allows the house to more or less attack him, starting to possess him physically. This manifests in him now and then and, in best Flip Wilson style, gives him the out of saying the Devil made him do it. The two acts that are the most egregious in that respect are his incestuous relationship with his sister Patricia and the action that ends the second act of the film. I won’t spoil this directly, but it’s not hard to figure out. I’ll offer a few hints.

What happens here is a story much like the backstory of the house in the first film, but that’s a significant problem. If this is a sequel, we have a case where someone has essentially committed the exact same crime (with different details) as the inhabitants before the Lutzes in The Amityville Horror, a coincidence that is staggering. If this is a prequel instead, the details of this crime and the family itself don’t match up. In the original film, it’s a significant plot point that the criminal of the previous tenants looks like a dead ringer for George Lutz. Jack Magner looks nothing like James Brolin.

So is it a sequel? If it is, it has gigantic holes in it. Is it a prequel? If it is, it doesn’t fit with the first film. We have no explanation (if this is a prequel) why the local priest is different. Father Adamsky (James Olson) does not appear in the first film, and the end of the film would seem to indicate that he has done something to affect the house’s possession, making this a poor fit as a prequel. Additionally, if this is a prequel, no Catholic diocese would allow anyone to move into this house in good conscience.

Truthfully, the only thing I really like about the sequel is the presence of Moses Gunn, an actor I’ve liked for a long time. Moses Gunn’s presence improves anything, even a poorly-conceived cash grab like Amityville II: The Possesssion.

Why to watch The Amityville Horror: It’s a genre classic.
Why not to watch: Not much happens for most of the film.

Why to watch Amityville II: The Possession: Some good gore moments.
Why not to watch: The connection to the first film is unclear.