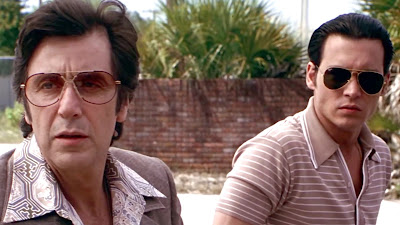 Like a lot of the movies that are still on my Oscar list, Donnie Brasco is one that I’ve almost watched a couple of times. These days, I seem to need to be in the mood for a mob movie, and Donnie Brasco is absolutely a mob movie. It’s also a movie that features Al Pacino playing an interesting combination of roles. On the one hand, Pacino made his name playing mob guys. On the other hand, his character here isn’t the boss. In fact, this is almost Pacino playing against type.

Low-level mobster Benjamin “Lefty” Ruggiero (Pacino) is introduced to Donnie Brasco (Johnny Depp), a jewel thief. Lefty wants Donnie to serve as a middleman for a large diamond ring he received as a payment, which Donnie claims is a fake. Donnie gets Lefty something much closer to a real payment, and in gratitude, Lefty more or less brings Donnie into the Mafia, introducing him to several made men including Sonny Black (Michael Madsen).

In reality, Donnie Brasco doesn’t exist. He is Joe Pistone, an undercover FBI agent who has been tasked with infiltrating the mob. Lefty is his ticket in, and once he starts making contact in the mob, he begins to move slowly up the ranks. He spins a story about his life, not revealing that he’s actually married to the embittered Maggie (Anne Heche) and has three kids. In fact, he claims to have no one in his life and to be an orphan. The intense secrecy of his job causes a lot of friction between him and Maggie. Worse, the longer he stays in the mob and in contact with men like Lefty and Sonny Black, the more he becomes like them.

A great deal of the story is involved with a couple of things. One is that Lefty feels like he is constantly overlooked despite his lifelong devotion to the family. Sonny Black continues to get promoted over him and he feels ignored despite having been the only person to look after Sonny’s family while he served time. Donnie, who has been vouched for by Lefty, moves up the chain instead, and finds himself in the middle of a gang war. When the crew works to open a club in Florida and are raided on opening night, the initial belief is that the crew has a rat. In truth, a local mob boss working with a rival of Sonny Black had the place raided, which leads to a gang war with Donnie/Joe caught in the middle, unwilling to be pulled out of cover because he knows it will be the life of Lefty once his affiliation to the FBI is revealed.

Donnie Brasco is supposed to (I think) be a vehicle for Johnny Depp. He is clearly the star of the film even if Pacino gets top billing (because of course he does). Depp is good in this, but it’s Pacino who makes the film. It’s so easy to think of Al Pacino as the characters he played in films like The Godfather and Scarface. In Donnie Brasco, he’s playing in that same world, but he’s a much smaller and much more pathetic fish. As I said at the top, he’s almost playing against type here. This is a guy who wants to be in charge of things, but can’t really seem to catch a break. Needing to help send tribute money up the chain to the higher bosses, Lefty isn’t hijacking valuable shipments of whiskey or running prostitution rings. He’s stealing parking meters and breaking them open for change.

That’s both the success and the failure of Donnie Brasco in a nutshell. It’s a movie that wants desperately to be about the Johnny Depp character and about this FBI agent working deep undercover as he goes after the mob. That could be an interesting movie and often has been. The truth, though is that this should be a movie about Lefty Ruggiero, who is a much more interesting character. The inner workings of the mob family are really only interesting as they affect Lefty, and while the film wants to make a big deal out of the destruction of Joe Pistone’s home life, Pistone isn’t that interesting. This is even true during those moments with nice cameos from actors like Paul Giamatti and Tim Blake Nelson and solid roles as an FBI agent from Zeljko Ivanek and another low-level mob member from Bruno Kirby.

What this means is that Donnie Brasco could be a lot better than it is if it were given a different focus. However, it can’t be all bad because of the understated and restrained performance of Al Pacino, words that I can barely believe that I typed. This doesn’t really register for me as a Johnny Depp film, but it’s quickly become one of my favorite Pacino performances, one for which he should have been nominated.

So, it’s a bit of a mixed bag. It’s worth seeing, but not for the reasons you’d think.

Why to watch Donnie Brasco: A reminder that Al Pacino can be a hell of a good actor.
Why not to watch: The story is focused in the wrong direction.