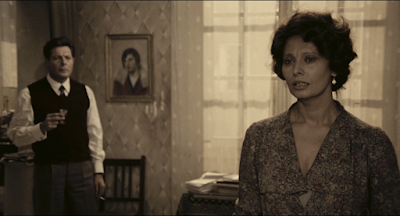 Because of my job, I’m often tempted to watch a movie while I’m working. I do it often to have some sort of background noise going on. There was a period of time when I watched either Aliens or Master and Commander just about every day for a month. I try not to do a great deal for this blog in this way, though, unless it’s a film I’ve already seen and know well. In the case of a film like A Special Day (or Una Giornata Particolare in the original Italian), that’s absolutely not the case. Since this is in Italian, watching means reading, and you can’t do that with partial attention.

A Special Day takes place on a very specific day in Italian history. On May 8, 1938, a little more than a year before the beginning of World War II, Adolf Hitler traveled to Rome to visit Mussolini. On this day, harried housewife Antonietta (Sophia Loren) stays home to return the family apartment to order after the morning actions of her husband (John Vernon) and their six children have torn the place apart. In the course of her morning, the family pet, a mynah bird named Rosmunda, escapes from her cage and flies across the courtyard to just outside another apartment.

That apartment belongs to Gabriele (Marcello Mastroianni), a former radio announcer who has recently lost his job for two important reasons. The first is that he’s a homosexual, not a huge problem initially in fascist parts of the world, but something that eventually did become an issue. More importantly, Gabriele is an antifascist, meaning that his voice can no longer be used to proclaim the state propaganda. Gabriele is on the verge of killing himself when Antonietta arrives at his door to retrieve the bird.

What follows from this initial meeting is a back and forth between these two characters, a sort of odd romance that takes place in the course of a single day. While Antonietta is naïve and uneducated, something that makes her a perfect vessel for the fascist ideology she warms to, she is also lonely and frustrated by her husband’s frequent infidelities. Meeting a handsome stranger sparks something in her, and almost in spite of herself, she begins to flirt with Gabriele, not knowing of his proclivities.

For his part, Gabriele is charmed, almost against his will, by the harried and overworked housewife. While she is ideologically and perhaps morally and ethically his opposite, she also proves to be a good listener, and someone who might proclaim fascist ideals in public, but privately harbors some clearly different values.

And this is the entire film. I’m surprised that this appears to be an original screenplay since it plays very much like a stage play with a couple of different sets. It’s something that could very easily be adapted for the stage, needing really only a couple of characters and a couple of sets that are virtually interchangeable; only the props would need to be different between the two apartments.

The most interesting choice here has nothing to do with the actors themselves, but with the look of the film. A Special Day looks oddly washed out. It is clearly in color, there are moments of red, for instance, but it almost looks as if it has been filmed on a sepia-toned stock. It’s not entirely unappealing, but I kept thinking that it would eventually open up into more color. Since the entire background of the film concerns the meeting of two fascist dictators, perhaps the lack of color is symbolic. I can think of multiple possibilities for this.

While there are moments of other actors, the film is completely owned by Loren and Mastroianni. I understand his nomination and question her lack of one for the role. Both of them are accomplished on their own, of course, and both of them are smart enough and good enough to both play off each other and support each other through the entire film. Since the entire story really is locked in on these two people, they have to be interesting and they have to be worth seeing. It’s a good thing that they are. In fact, it’s entirely possible that they’re a little too much. No one is ever going to look at Sophia Loren and buy her as a harried housewife struggling to make beds and clean up after six kids.

Beyond that, the question I have is of the ultimate message. The film gives a great deal of agency to Gabriele despite it being made in 1977 and featuring a gay character. It gives far less to Antonietta, who seems trapped in her life and either unwilling or unable (or both) to make any sort of escape from it. Is that the takeaway here? Does the film endorse its own comment about women not being smart enough to matter?

Still, it’s an interesting film, and one worth tracking down.

Why to watch A Special Day: Two great actors at the top of their game.
Why not to watch: The message seems to be an ugly one.