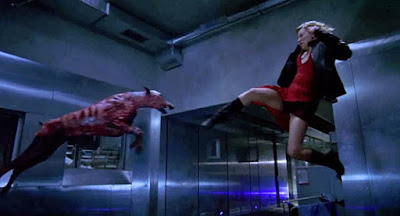 Every now and then, the fact that I worked in the computer/video game industry from 1991 to 2003 becomes relevant on this blog. I was working in the industry when the Resident Evil games came out, and was still working (and starting to look at other options) in the industry when Resident Evil was released in movie theaters. I didn’t go see it, and I never played any of the games. In my own defense, by this point in my career, I only played what I was paid to play. Resident Evil could well have been something I wrote the book for, though; I did more than my share of first-person shooters.

Resident Evil was directed by Paul W.S. Anderson, who is clearly the least of the three most-known current director with that last name (Wes Anderson and Paul Thomas Anderson being the other two). While I admit that that is true, I still have a soft spot for Paul W.S. Anderson’s movies in a lot of cases. Mortal Kombat is better than it should be, Event Horizon is vastly underknown, and I am admittedly and strangely obsessed with Soldier. Because of this, I went into Resident Evil with some hopes and some curiosity. It was a mild connection to my past and I like the director in spite of himself and even feel sorry for him at times because he’s gotten unlucky with some films. Then again, he is married to Milla Jovovich, so I’m not going to feel too sorry for him.

Anyway, Resident Evil is based on the video game of the same name. The Umbrella Corporation has created a think tank/lab/evil underground base where genetic research and other fun things are happening. As the film opens, we see someone release a toxin into a lab. The building is quickly shut down and the various people locked inside. While we don’t find this out right away, the computer monitoring/oversight system for the lab (known as The Hive) has decided that everyone in the facility needs to be killed to prevent the infection that has been released from getting out into the wider world.

Enter Alice (Milla Jovovich), who wakes up naked in a bathroom with a severe case of amnesia. She is soon contacted by a team that tells her she works security for Umbrella and that the mansion she is in is the cover for The Hive below. She, a local cop named Matt (Eric Mabius) and the team will be heading into The Hive to figure out what is happening and shut down the computer oversight, nicknamed the Red Queen. Along the way, they encounter Alice’s “husband” Spence Parks (James Purefoy), who lives in the mansion with her as a part of the cover for the lab complex below.

The Resident Evil video game was more or less a straight horror version of games like DOOM, which means that we’re going to get a lot of action. That means we need enemies for our heroes to deal with, which means that the toxin that was released is going to have some interesting things going on. The toxin, known as the T-virus, animates the dead, turning them into zombies, who (like all good movie zombies) pass on their infection with a bite. Resident Evil ups the ante here by making virtually any contact with the undead, say a scratch, being just as eventually lethal.

What I find very interesting here is that there are a few good action set pieces, but Resident Evil doesn’t have a bunch of action. There are some quality moments, but the zombies themselves don’t go down easily, requiring a headshot or something similar to put them down permanently, much like the classic Romero zombie. What the movie does differently is ramp up the amount of zombies very quickly. There is an initial attack by a single zombie, but that is followed by a horde right away, and most of the rest of the attacks will be from groups until we get to the big baddie at the end.

The problem with Resident Evil is that ultimately, it’s not very good. It’s not particularly scary, which is a problem for a horror movie, and there’s not a great deal of action, which makes it less of an action movie than it should be. Our heroine Alice, despite being depicted with a large weapon on the movie poster, never packs anything more than a pistol for the entire film. The team that goes into The Hive with her is whittled down quickly, leaving us with just a couple of them even before we get to any zombies at all, and most of the remaining characters have run out of ammunition pretty much after the first encounter.

This isn’t a bad movie, but it’s not anything it wants to be or promises that it will be. Sadly, that’s kind of a theme with Paul W.S. Anderson films. He’s a guy with a lot of good ideas and doesn’t seem to have a way to get the bat off his shoulder to put those ideas on the screen in a tangible way. Resident Evil has some good ideas, but they’re more in the subtext or something we have to dig to find rather than an explicit part of the story.

It’s also worth noting that the big baddie that attacks at the end of the film is done with CGI that very much looks its age. It might have been great (or at least acceptable) in 2002, but it doesn’t cut it today.

I didn’t hate this, but it didn’t make me want to watch any of the sequels.

Why to watch Resident Evil: Paul W.S. Anderson needs your love.
Why not to watch: It’s not that great.