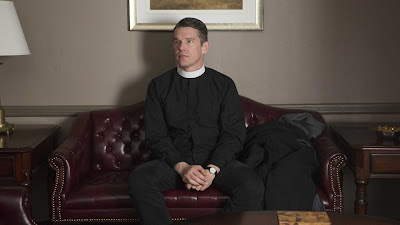 I find it important, now and again, to remind both myself and readers of this blog about the function of the Oscar posts on Monday and Friday. These are not a celebration of the best of the Academy, but a reckoning of just how poorly the Academy has done historically at both nominating and awarding prizes to films. When I finally catch up with something like First Reformed, which came with huge buzz when it was released, I’m reminded of that mission statement.

First Reformed is far from the first movie of 2018 that I have liked, nor is it the first I’ve seen from last year that I think was worthy of Oscar consideration. It’s not even the first that I consider important from last year, nor is it the one that I found to make the greatest artistic statement. It is, however, the first film I’ve seen from 2018 that made me really want to sit and think about what I had seen for a chunk of time after it ended. Not a lot of movies strike me that way, and so, when it happens, I find myself surprisingly moved.

In this case, that’s unusual for me, since First Reformed is the story of Pastor Ernst Toller (Ethan Hawke), who finds himself in charge of a history church in New York state. The church, the First Reformed Church of the title, has a rich history in the community and was once a stop on the Underground Railroad. Now, however, attendance is dwindling, and Pastor Toller’s job consists in large part of schlepping tourists around the building and hawking merchandise. The church itself is owned by a nearby megachurch, whose pastor, Joel Jeffers (Cedric “The Entertainer” Kyles) serves as a sort of spiritual advisor to Toller as well as a reminder of Toller’s relative poverty and lack of success.

Several things about Toller and the people near him are soon evident. The first is that Toller was once married. His marriage died when his son died in Iraq; Toller had been in the military (a family tradition), and his wife Esther (Victoria Hill) held Ernst responsible. He is also evidently ill with something serious, but has put off going to a doctor and getting it looked at. Finally, at the behest of parishioner Mary Mensana (Amanda Seyfried), he becomes involved in the life of her husband, Michael (Philip Ettinger). We learn that Mary is 20-weeks pregnant, and Michael wonders about the morality of bringing children into a world that is dying, an environmental cry for help that soon affects Pastor Toller as well.

There’s a great deal going on here, almost too much for a review to get into, and it is all woven together beautifully to tell the story it wants to tell. One of the conceits is that Pastor Toller tells us at the start of the film that he will be keeping a journal for a year, at the end of which he will destroy all evidence of the journal. It is a sort of penance he is exacting from himself, exorcising whatever demons he might have of the mental and spiritual nature, even while the physical ones are eating him alive.

It would have been very easy for First Reformed to become preachy, but it manages to avoid this trap. This could have, for instance, become an environmental rallying cry, but that would have severely damaged the ultimate message of the film. We’re going to touch on this, though—the 250-year celebration of the church is being sponsored by Ed Balq (Michael Gaston). Balq has paid for much of the church’s upkeep, but is heavy into industry, and is thus complicit in the mind of Michael Mensana, and eventually in the mind of Pastor Toller as well. What it does very well is question just how complicit the Church is in allowing this sort of destruction to take place. It’s soon evident that Pastor Jeffers is less concerned with Balq’s politics and message and much more concerned with the church’s ability to maintain its huge congregation and get Balq’s financial assistance.

As I said at the top, it’s a movie like First Reformed that causes me to ask what the hell the Academy was thinking. I could see supporting nominations for Amanda Seyfried and Victoria Hill as well as one for Cedric the Entertainer. But the biggest robbery here was leaving Ethan Hawke off the list. This may well be his best work.

So, I’m disappointed, but that has nothing to do with the movie itself. Oscar should be better than what it is.

Why to watch First Reformed: Message, character, performance.
Why not to watch: It’s a surprisingly hard watch.