Off Script: From Dusk till Dawn

Film: From Dusk till Dawn
Format: DVD from Cortland Public Library on The New Portable. 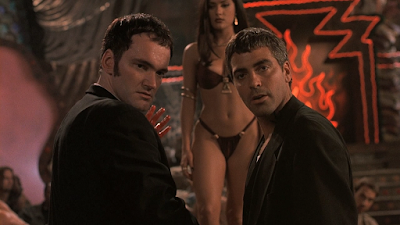 Readers of this blog should know by now that I will go out of my way to avoid watching a lot of Tarantino films. I get tired of him very quickly, and I’ve said for years that Tarantino would be a lot better if he stopped trying to be awesome and instead tried to be good. So what do I have to say about From Dusk till Dawn, which features him not as the director, but as screenwriter, executive producer, and featured actor? I’ll say that Tarantino is a better director than he is actor, although that’s hardly a shocking opinion.

Anyway, From Dusk till Dawn is from the early years of George Clooney’s movie career and long before he started to get serious about the movies he was making. This is from his pre-Batman & Robin days, when he was just a good-looking actor on his way up. And since this is a vampire horror/action movie, that’s probably not surprising.

Here’s the thing—while this was directed by Robert Rodriguez, it was written at least in part by Tarantino, so it feels a hell of a lot like a Tarantino film. What I mean by this is that virtually everyone in the film is a criminal of some sort or another, the average guy in the film is a borderline rapist (or an actual rapist), and really ugly things happen because Tarantino wants them to. Oh, and there’s a shitload of foot fetish stuff involving his character, because it’s been long established that Tarantino has a foot fetish even if he never admits it.

So, for the first chunk of the film, we’re going to be focusing on the Gecko brothers. Seth Gecko (George Clooney) is broken out of prison by his younger brother Richard (Quentin Tarantino), and the two head off toward Mexico. The idea is that once they cross the border, they’re going to hook up with someone who will, for about 30% of their money, take them to essentially a criminal paradise called El Rey. But, we’re going to have them kill off a few people (including a liquor store clerk played by John Hawkes), take a hostage, and, of course, have Richard Gecko rape and kill the hostage at one point. Because why not?

Needing new hostages to help them get across the Mexican border, our criminal pair kidnaps the Fuller family: questioning minister Jacob (Harvey Keitel), son Scott (Ernest Liu) and daughter Kate (Juliette Lewis). The three are driving in Jacob’s RV as he questions his faith following the death of his wife. The Geckos hop into the RV to get them across the border, which happens successfully, with Richard naturally creeping on Kate the entire time, since we evidently need to establish as much as possible that he’s a rapist that we are supposed to at least in part be sympathetic with.

The place where the Geckos are planning to meet their contact is a strip club/bar/whatever called (seriously) the Titty Twister. And whaddayaknow? It’s infested by vampires, including a lead performer called Santanico Pandemonium (Salma Hayek), barker Chet Pussy (Cheech Marin), and bartender Razor Charlie (a very thin Danny Trejo). In the bar eventually siding with our criminals and family trio are a biker named Sex Machine (Tom Savini) and a man named Frost (Fred Williamson). Essentially, the second half of the film is these seven characters fighting off hordes of vampires who seem to transfer the curse of vampirism with a single bite, much like zombies.

You know you’ve seen a lot of movies when one of the moments that stands out to you is recognizing the house band (headed by Tito Larriva). From Dusk till Dawn is one of those rare movies that gets better the longer it plays. While I can’t say that it ever gets to the “I love this movie” point, it starts low but ends up crossing the “I liked it well enough” Mendoza line.

And yet, this is a movie that is rife with the seedy fantasies of Quentin Tarantino in far too many unnecessary ways. Tarantino, based on what I have seen of his films, is really self-loathing in a lot of ways. He wants desperately to be seen as cool and knowledgeable, but he also desperately wants to be seen as awful. Why else create a character in this film whose sole function is to be raped by his character? What point does she have except to be both disposable and to make his character that much more reprehensible. Why does Tom Savini need to have a codpiece-mounted pistol with twin testicular-like revolver cylinders? That thing would give him a vasectomy every time he fired it. Why do we need Salma Hayek sticking her foot in Tarantino’s mouth as part of a burlesque number? Seriously, what the fuck?

Once this turns into a vampire-laden horror movie, I can’t say it becomes great, but it at least becomes more entertaining. It’s dumb, and the vampires don’t make a lot of sense. There are too many moments when our heroes are essentially mourning another fallen comrade and the vampires just…stand around and let them do it rather than attacking. Still, for the carnage, it’s not the worst I’ve seen. There’s a lot here that seems to exist specifically to be as offensive as possible. In other words, like Tarantino scripts in general, it tries far too hard to be awesome instead of just trying to be good.

Why to watch From Dusk till Dawn: Ultimately, it’s pretty fun.
Why not to watch: The scurrilous presence of Quentin Tarantino.