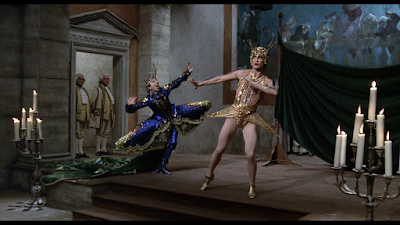 Years ago, when I was working on a BA in English, my brother sent me something about how to be a really good English major. It was a joke, of course, a piece of satire that naturally included a great deal of truth. One element of it was that you should pick a particular author and hate all of that author’s work. I suppose the film equivalent of that is to pick a director that is widely acclaimed and hate all or most of that director’s output. For me, that director is Federico Fellini. I know he is lauded and well-loved, but I find virtually all of his work completely self-indulgent and navel-gazing. I didn’t have a great deal of hope that Fellini’s Casanova would be any different.

And…it’s not. Fellini’s Casanova is a riot of mise-en-scene and enormous, elaborate costumes desperately in search of being something more than just a series of events connected by a single character. I know that there are people who like this stuff. I know that Fellini has people who adore his work. I’ll I see, though, is a whole lot of style and virtually no substance.

As just mentioned, there isn’t a great deal of plot here. What there is instead is what appears to be a series of stories about Giacomo Casanova (Donald Sutherland!) as he goes from one sexual adventure to the next. These are completely unconnected, and sometimes we jump from one part of the world to the next without much in the way of explanation of why or how we’ve gotten there. The idea seems to be highlights in the life of Casanova, and I have to wonder about the highlights that we’ve been given. Naturally, most of these involve fuckin’.

The other thing is that for most of these events or encounters, there seems to be virtually nothing at stake. For instance, at one point, Casanova finds himself in Paris, where he meets Madame d’Urfe (Cicely Browne), a mystic and alchemist who is convinced that (despite her age) if she can be impregnated by the right person, her spirit will move into her child and will somehow make her immortal. Naturally, Casanova is the guy, but the only way he can perform with her is to have another woman in the room for him to look at. In this case, he manages to steal his brother’s girlfriend for the task. And then that’s over and suddenly he’s a part of someone else’s court.

When I say that nothing seems to be at stake, I mean this is the case all the time. At one point, Casanova meets Henriette (Tina Aumont). She becomes the great love of his life, but after they spend a single night together, promising to always be with each other, she disappears and leaves word for him to not try to follow or find her. And that’s pretty much it. He has this alleged great love who vanishes and we literally never hear about her again. Casanova just ends up somewhere else to do some more fuckin’.

Really, the main reason why this is worth anything in terms of your attention is because of just how spectacular it is to look at. The sets are glorious and overdone and pompous, as are the costumes. These are elaborate and insane, articles of clothing, with hats and wigs stretching feet above the heads of the actors. Women wear dresses that appear to be four feet wide in the hips and for a substantial portion of the film, Casanova wears a resplendent pink outfit that would be shocking in anything else, but here fits in with the rest of the scenery. This does not take into account the severe look of Casanova himself. Sutherland apparently had to wear both a prosthetic nose and chin, and also had to shave his head to strap into the bizarre headgear that served as his hair. 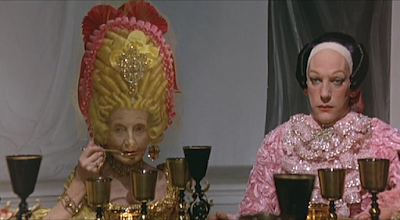 Clearly, I didn’t like this film, and I am very much in the minority. I’ll agree that it is certainly something to look at. It’s a cross between a period piece and the fever dream of the same period piece, and I’m not sure which I would like more. Lots of people are going to watch it for the sex, and they’ll be sorely disappointed. Most of it is cartoonish and about as titillating as a punch in the throat.