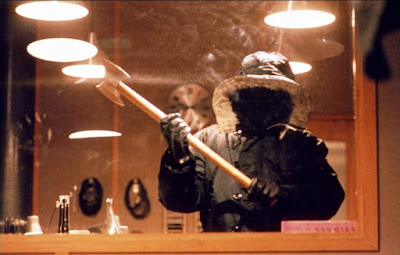 When someone reinvents a genre or part of a genre, it’s inevitable that there will be copycats. The first successful slasher begat more and more slashers. Some of these were good, many more were terrible, and a lot were simply mediocre. When Scream reinvented the slasher into something post-modern and self-aware, it naturally had its imitators as well. One of those is Urban Legend, a film that gives us a group of college students who know the legends in question and who will die in droves because of them.

We start with a bang, with college student Michelle Mancini (Natasha Gregson Wagner) driving back to campus one night and having a scare from a stuttering gas station attendant. What she doesn’t know is that there is someone in her back seat, who soon rises up and beheads her with an axe. And the urban legend parade begins.

Jump forward to the campus of the college in question and a group of students discussing what may or may not have happened. One of those students is Paul Gardener (Jared Leto), who has written a story about Michelle’s death in the school paper. Also sitting around discussing the possible tragedy are Natalie Simon (Alicia Witt), her friend Brenda (Rebecca Gayheart), college radio sex talk show host Sasha (Tara Reid), and fratboy assholes Parker (Michael Rosenbaum) and Damon (Joshua Jackson). As it happens, most (or all) of these students appear to be in the same class about mythology and urban legends, taught by Professor William Wexler (Robert Englund).

It’s also worth noting that this college has its own urban legend. Twenty-five years previous, according to this legend, a teacher went loopy and invaded a residence hall, killing everyone he found before cutting his own throat. The residence hall in question is apparently still on the campus but is boarded up and no longer used, which honestly begs the question of why it wasn’t knocked down.

Anyway, students start getting picked off one-by-one, with each death being connected in some way to a classic urban legend. We get the boyfriend (sorta) hanged in the woods with his feet brushing the car, the “Aren’t you glad you didn’t turn on the lights?” legend, and a few more. All of these seem to be directed at Natalie in some way—she’s in the car when someone gets hanged above it; it’s her roommate who gets killed later. As it turns out, Natalie has a dark secret involving an urban legend from her past, and she’s also connected to Michelle, the first victim.

There are exactly two things I liked in Urban Legend. The first is the character of the campus security officer, Reese Wilson (Loretta Devine). Reese is absolutely the best character in the film and seemingly the only one who has an actual brain. Give me a movie focused on her as the protagonist, and I’d watch it in a heartbeat. The second thing I liked is a joke that happens early on. Joshua Jackson’s character turns on a car radio and the song playing is the theme from his old television show, Dawson’s Creek. He listens for a second, makes a face, and shuts it off. I got a genuine laugh from that.

Otherwise, Urban Legend is a mess. Nothing in this film makes any sense. Essentially, over and over, we’re given things that happen in a particular way because the plot demands that they happen in that way. On the run from the killer, Natalie flags down a ride from the college’s creepy janitor (Julian Richings). Eventually, the car crashes. The janitor is apparently killed, but Natalie is completely unscathed, able to run away from the wreckage at top speed. Why? Because that’s what the film needs to have happen.

It also doesn’t know when to end. There are about six endings here, and what is ultimately the ending for the story that we’ve been watching could happen only if the killer in question was impervious to bullets and capable of teleportation. Again, it happens because this is what the film demands happen and not because it makes any sort of logical sense.

Aside from Reese, all of the characters are unappealing. The film even crosses taboo territory and gruesomely kills a pet. Seriously, that was uncalled for. Worse, for a film with this premise, a bunch of the deaths appear to be completely unrelated to any urban legend at all. They just happen because the plot needs them to, and there’s no attempt to connect them to a classic story at all. Perhaps the biggest sin is that at no point does anyone say, “…and there, on the door handle, was a hook!”

Evidently there are people who like Urban Legend because this thing spawned a couple of sequels. I can’t be sure how this happened, because I think it’s a complete trainwreck. Apparently, there were hordes of people who went to see this and liked it enough to see at least the first sequel. I don’t know any of those people. I think they might be urban legends themselves.

Why to watch Urban Legend: The security guard is pretty great.
Why not to watch: It’s far stupider than it should be.