Off Script: Tales from the Crypt: Demon Knight 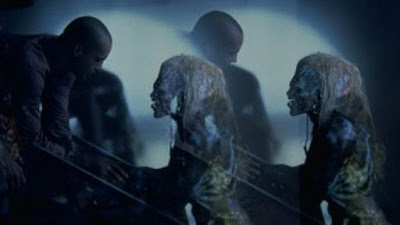 In this case, we’re led to believe that the Crypt Keeper is directing a film. The opening sequence shows something typical of the television show—a woman has killed her husband and is apparently talking to her lover while the husband’s body dissolves in a bathtub of acid. Of course the husband (an uncredited John Larroquette) wakes up and starts to stalk the murderous wife. Just as he’s about to attack, we hear, “Cut!” and we get our CK intro, who tells us he’s already finished a movie that he calls Demon Knight. So in the opening sequence (and again at the bookend close), we’re very much in the realm of meta.

I’m not going to do a point-by-point breakdown of the story here. The basic plot is this, much of it coming in an exposition dump in the middle of the film. Assume at least the basics of Christian theology and Biblical accuracy. The addition here is that demons managed to acquire seven keys that would enable them to wield the power of the cosmos. God, of course, dispersed the keys across the universe. Doodley-doodley-doop to the present day and the demons now have six of the keys. The seventh is being hotly pursued.

That seventh key is in the possession of a man named Brayker (William Sadler). He is being chased by a demon in human form known as The Collector (Billy Zane). Brayker’s main line of defense is the key itself which, in addition to being a key, is also something like a reliquary, containing the blood of previous guardians of the key up to and including Christ himself. Brayker ends up in a church-turned-motel to make a stand against The Collector and his demons.

What I was genuinely surprised by here is the cast. Tales from the Crypt: Demon Knight is the sort of horror movie that is designed to be fun and entertaining and not really serious. This isn’t to say it’s a comedy (it’s not), but it’s not the sort of thing designed to give anyone nightmares or fundamentally challenge their opinion of the horror genre in general. It’s a campy film with gory special effects. It’s not the kind of film where you expect to see people like CCH Pounder, Jada Pinkett Smith, John Schuck, or Thomas Haden Church. The presence of Charles Fleischer and Dick Miller is a lot more understandable.

The thing is this: Demon Knight is really good for being exactly what it is. It’s not striving to be an art film. No one involved in this had any dreams of this being something that would seriously advance his or her career. It’s a cheap horror movie with a relatively interesting plot (okay, the theology is pretty stupid, but whatever) and nothing more. It has no aspirations beyond wanting to be entertaining for its audience.

The truth is that I had a lot of fun watching this. I had absolutely no expectations of anything great or even that good, but this was surprisingly fun. Billy Zane is ridiculously well-cast as a demon in human form. He’s just attractive enough and suave enough to pull off his various attempts at seduction believably. There’s a great sequence between him and Jada Pinkett Smith, an actress I’ve never had a great opinion on, and they both make it work really well.

Demon Knight is not a movie I would recommend to others without some reservation or without knowing a lot about the person in question. People who gravitate toward movies like Night of the Comet and Tremors are going to find a lot here that will make them happy. People who are in the mood for serious horror are going to be let down by it. If you like horror movies that play out more like a rollercoaster than a dark night of the soul, you’ll enjoy this. Admittedly, I’d like it better without the ultra-camp bookend of the Crypt Keeper, but when you’ve got Tales from the Crypt in the title, you have to live with what you’re given.

Why to watch Tales from the Crypt: Demon Knight: It’s inventive.
Why not to watch: The theology is pretty childish.