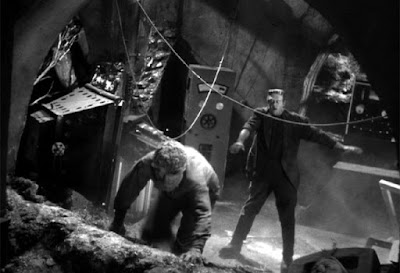 Of course no one believes anything he has to say about his being a werewolf despite having admitted to committing a murder during his first night in the hospital. Eventually, Larry breaks out and heads to the continent where he tracks down the Romani woman Maleva (Maria Ouspenskaya) who originally told him about the curse. Recognizing him as the man who received the curse from her son, she agrees to help him, and the two decide to seek out the famous Dr. Frankenstein, who is said to be able to work miracles in the area of life and death.

Of course, Dr. Frankenstein is dead (and this is Dr. Ludwig Frankenstein we are talking about here), and his castle (circa Ghost of Frankenstein) is in ruins. Hunted by the townspeople for even mentioning the hated name, Larry finds himself once again transformed. He eventually winds up at the castle, where he discovers the Monster (Bela Lugosi!), and revives him.

So here’s the thing--Frankenstein Meets the Wolf Man is both a joy and a little disappointing. It’s really short, and a movie that pairs up two truly iconic monsters could stand to run at least another 15 minutes to give us the team up (or battle) we deserve. That said, I’m not sure where I’d beef up the running time. The movie gets right to the point of the story and goes along at a nice clip. There’s not a lot of fat to trim here, and adding more might end up just feeling like padding.

It does feel strange that Frankenstein gets the top billing, though, because he’s not in the movie until after the halfway point, and he’s not in it a great deal after that, either. And yes, I know it’s Frankenstein’s Monster and not the doctor himself. Allow me a shortcut now and then.

Still, Lon Chaney reprising the role of Larry Talbot is a real treat. Chaney made a lot of terrible movies in his career, but he makes up for all of them with this character. The Wolf Man, as I said above, is the most tragic of the Universal Monsters, and a great deal of that can be credited directly to Chaney’s loser-like persona and hangdog expression. He’s easy to feel sorry for, and that’s exactly how we should approach Larry Talbot.

Of course I liked this movie. It’s loads of fun for what it is and while I could stand more of the Monster and more in general, it’s a hard movie to find fault with in any serious way.

Why to watch Frankenstein Meets the Wolf Man: Two classic Universal monsters in one movie.
Why not to watch: Despite his top billing, Frankenstein’s Monster isn’t in this that much.