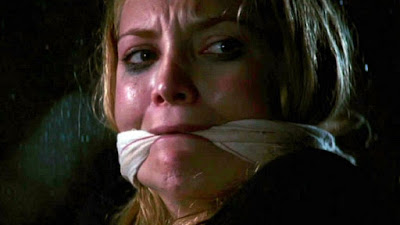 There’s something I find particularly interesting and effective about the sort of horror that plants itself firmly in the middle of the bayou. Voodoo often gets a bad rap in films. There are a lot of movies that portray Voodoo as a sort of evil black magic whose practitioners are wicked people bent on controlling the will of others. That’s not true, of course. Voodoo is a religion with rituals just like any other. I think it’s that bayou—the swamp, the alligators, the feel of a brooding evil that makes the connection for people. The Skeleton Key looks like it’s going to go down that path, but it doesn’t. Rather than painting Voodoo as a sort of dark and sinister religion, this instead veers into the practice of Hoodoo.

And really, therein lies the problem. A lot of the Voodoo in movies is actually Hoodoo, or Hudu. Both are prevalent in Louisiana and Haiti, and both seem to have come to the Western Hemisphere via the slave trade, but they are substantially different. Where Voodoo is a religion, Hoodoo is more a sort of folk magic, a series of spells and incantations that can give the practitioner great power. For us, it’s easy to get them confused, since a great deal of what we associate with the religion is actually the folk magic.

The distinction is going to be important for The Skeleton Key. Hospice nurse Caroline Ellis (Kate Hudson) discovers that there is something awful about the place she is working. When an old patient dies, she discovers that no one she works with really cares at all. She decides that it’s time to leave, and she takes a job as an in-home hospice worker deep in the bayou about an hour outside of New Orleans. She heads out to the ancient plantation home to meet her new patient Ben (John Hurt), his wife Violet (Gena Rowlands), and the man currently working on rewriting their wills, lawyer Luke Marshall (Peter Sarsgaard).

Right away, things feel off at the ancient house. Caroline starts to poke around and eventually discovers an ancient locked room in the attic. After she explores this room, she discovers that almost a century before, the house was inhabited by a banker who had a couple of servants named Mama Cecile (Jeryl Prescott) and Papa Justify (Ronald McCall). While the occupants saw the two simply as servants, they were actually powerful Hoodoo practitioners who, when this was discovered, were lynched. There is, since this time, something like a pall that hangs over the house, a pall that seems to be real.

As Caroline slowly starts to investigate, she learns that Ben, who is mostly paralyzed after a stroke, is trying to communicate with her and that he wants to be taken away from his wife. Caroline looks for help wherever she can. Luke doesn’t seem to believe her and her old roommate from New Orleans, Jill (Joy Bryant), seems to think that she’s getting in too deep. But more and more things become a game of cat and mouse between Violet and Caroline, and it’s never clear which one is the cat and which one is the mouse.

The Skeleton Key is yet another film in the series of them that I want to like more than I actually do. There is something here that really wants to get out. There are a couple of jump scares and no real gore, which means that it’s also a film that wants to be about the atmosphere and creating a world where the spiritual is just barely touching reality and trying to cross over. Setting the film in the bayou and touching on Hoodoo helps this a great deal. As I said above, there is a sense of this sort of place that feels like a deep and evil magic might be real. This is enhanced by the cinematography and lighting that just barely shows us what we need to see.

This atmosphere is the best part of the film along with the older members of the cast. I always love John Hurt in just about anything, and Gena Rowlands is creepy and strange here. There’s also a brief-as-hell cameo form Isaach De Bankole who doesn’t ever get enough screen time.

Sad as it is to say, I have trouble taking Kate Hudson that seriously here. I’ve been told that she’s great in Almost Famous; I haven’t seen it yet. I’ll cross that bridge when I get there. Here, there’s just something about her that seems too lightweight and flighty to be at the center of an atmospheric horror film. I mean, I see Kate Hudson and I think Bride Wars, and that can’t be good.

There’s a great movie here wanting to get out. It can’t quite do so, but it desperately wants to.

Why to watch The Skeleton Key: Ancient bayou ritual magic.
Why not to watch: It is a little hard to take Kate Hudson seriously.