Film: The Brain That Wouldn’t Die
Format: DVD from personal collection on laptop. 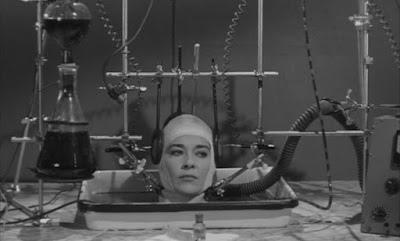 As a fan of Mystery Science Theater, I’ve at least seen a version of The Brain That Wouldn’t Die. Any dedicated fan of the show will tell you that it was Mike Nelson’s first film in the theater, the first episode after the departure of Joel. That’s all well and good, but I’d never seen this without the silhouettes at the bottom of the screen. I also evidently own two copies of it, one on a large collection of mostly crappy horror movies and one on a two-disc set. Why I would need two copies of this is, honestly, beyond me.

I can save everyone a lot of time by just stating that The Brain That Wouldn’t Die is the original recipe version of Frankenhooker, but that doesn’t quite do justice to the insanity of this film. Young doctor Bill Cortner (Jason Evers) is assisting his father (Bruce Brighton) in surgery. The patient dies on the table, but Bill believes he can revive him using unorthodox methods that he has developed in his off-hours research. He does, and while his father disapproves of his methods and the fact that Bill has evidently been stealing body parts to experiment on doesn’t affect his pride in his son saving a life that would have otherwise been lost. It’s also worth noting that Bill’s fiancée Jan Compton (Virginia Leith) works in the ER as a nurse because of course she does.

Bill and Jan are heading up to Bill’s family’s secluded cabin, since that is where Bill does his research. Before they head out, Bill gets a call from his assistant Kurt (Anthony La Penna). Knowing that there might be a problem, Bill speeds off with Jan in the car next to him. Of course they have an accident and because we need tragedy, Jan is decapitated in the accident. Fortunately (for the plot), Bill runs to the cabin with her head, and thanks to the miraculous serum he has developed, he manages to put that head in a dish on a table and keep her alive. So yes, we’ve got Jan’s head in a dish and now Bill’s quest is to find a suitable body on which to transplant her head.

See, this is what Bill’s research has been focused on: transplantation. His assistant Kurt is also one of his primary guinea pigs—Kurt’s left arm has been transplanted several times and is currently withered and non-functional. We also learn that there is a creature that was more or less an initial experiment behind a locked door, because it’s not a mad scientist movie if there isn’t an extant failed experiment that can come into play in the third act.

Anyway, we get two lines of story to take us to the end. In Jan’s case, she may just be a head, but the serum that is keeping her alive seems to have given her some unexplainable powers, including the ability to communicate with the thing behind the locked door. In Bill’s case, the quest is to hit every sleazy spot in town to find a suitable body for Jan’s head. This means we’ll be going to burlesque shows and watch some painful sexual innuendo. Bill finally focuses his efforts on Doris Powell (Adele Lamont), a figure model who has a terribly scarred face.

Of course none of this is going to work. The main reasons for this are the thing behind the door (played in goofy costume by Eddie Carmel) and Jan’s desire to no longer be a freak of science. There’s going to be limbs ripped off, fire, and destruction by the end, which is pretty much exactly what we want in a movie like this one.

So, as I said above, in many ways this is a precursor to Frankenhooker. I’m not suggesting that this is a film that was necessary for that later film, but there’s clearly some level of influence here in terms of looking for a body on which to transplant the head of his girlfriend. There’s also a thick layer of sleaze here that can’t be ignored. Bill tries to pick up women he’s known in the past and some burlesque performers who get into a cat fight over him (complete with cat pictures on the wall and cat sound effects). This isn’t prurient or titillating; it’s oily and dirty. If the film itself weren’t ultimately so silly, this would be the sort of movie that required a shower after viewing. At one point, Bill’s father comments about how much he enjoys watching his Bill and Jan grope each other. It’s a layer of ick I didn’t need.

In fact, the only reason I have any sort of fondness for this film at all is because it was the movie at the center of Mike Nelson’s first episode as the host of MST3K. Without that, there would be nothing here except a movie that is nasty in a lot of ways and stupid in just about every other way. If you’re going to watch this, I recommend watching it with the assistance of Mike, Crow, and Servo, because they at least make it bearable.

Why to watch The Brain That Wouldn’t Die: Do it for Mike and the ‘Bots.
Why not to watch: It’s not just stupid, it’s also really, really sleazy.