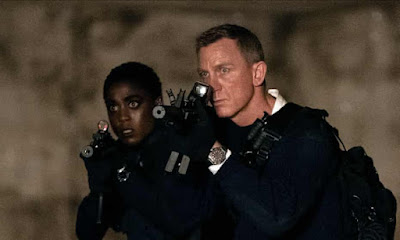 In late 2020 and early 2021, I did a complete rewatch of the entire James Bond franchise, including the spoof version of Casino Royale and the unofficial Connery vehicle Never Say Never Again. I did this in preparation for No Time to Die, which was set to be the fifth and final Daniel Craig entry in the series. I probably did this a little too early, because it’s been about a year since I did the rewatch. Still, better late than never, right? I’ve once again seen all of the Bond films, having caught up recently with Craig’s final outing.

Before I dive in, I need to say two things about this film. The first is that there is no easy way to talk about No Time to Die without revealing pretty much everything. That’s fine if you’ve seen the movie, not so fine if you haven’t. So, everything after these first two paragraphs is going to be spoiler territory. If you don’t want the movie spoiled for you, don’t click to read more. Yes, that will cost me a little traffic, but I’m okay with that. If this gets spoiled for you, it’s on you. The second thing is that I think there should be one more James Bond portrayer, and that person should do three films. That way, we have a perfect set: George Lazenby (1 film), Timothy Dalton (2 films), new Bond portrayer (3 films), Pierce Brosnan (4 films), Daniel Craig (5 films), Sean Connery (6 official films), and Roger Moore (7 films). How perfect is that?

Anyway, we’re going to be in very uncharted territory with No Time to Die. We’ve had films in the series in the past where Bond is not on the job, but in this one, he is fully retired. He’s spending his life with Madeleine Swann (Lea Seydoux), still overcoming the loss of Vesper Lynd. When Bond is ambushed by Spectre agents, he is convinced that Madeleine has betrayed him. He puts her on a train and sends her away, telling her that he will never see her again.

Five years later, in the present, Bond is retired in Jamaica and is contacted by his old CIA friend Felix Leiter (Jeffrey Wright). The world situation is dangerous. A Russian scientist named Obruchev (David Dencik) has been kidnapped from an MI6 facility where he was working on a virus called Heracles. Not a true virus per se, this designer disease is actually nanobots coded to someone’s DNA. Contact is harmless (but permanent) for anyone who encounters it except for what has been encoded on its DNA. Anyone it has been encoded for—and their relatives—will find contact with it fatal. Now, the power to kill masses of humanity—entire races, or everyone with blue eyes, for instance—is in the hands of what remains of Spectre, or perhaps someone worse.

That’s the basic set up, and there’s a lot that happens, including a number of double crosses. There’s a lovely moment in Cuba where Bond, out of retirement thanks to persuasion from Leiter, teams up with a spy named Paloma (Ana de Armas). This is some of the most fun of the film, and de Armas is clearly having a wonderful time. There are also complications and a number of realizations. The true bad guy here is actually out to remove Spectre completely. Saddled with the ridiculous name of Lyutsifer Safin (Rami Malek), our baddie has an old connection to Madeleine Swann, Malek’s signature prosthetic teeth, and a lot of facial scarring.

And, of course, there are some very surprising moments that are pure spoiler territory. How do we know, as the audience, that No Time to Die is serious? Felix Leiter, a man who has appeared in double-digit James Bond films, doesn’t make it much past the first act. This is a shocking development, no more shocking than the revelation that Madeleine Swann’s child is also James Bond’s child. Years of being on the job for Her Maj, Bond evidently finally slipped one past the goalie.

How else do we know this is serious? Because the 007 number—the exclusive territory of one Commander James Bond since 1962—has been recycled and given to a new 00 agent, Nomi (Lashana Lynch), an event that no doubt has caused endless consternation in the lives of men’s rights activists.

But, of course, the real story is the ending, which for all of the spoiler talk I will not reveal. It is surprising, though, but not entirely unexpected. It is ultimately a satisfying way to end Craig’s time on the job, though, and to allow him to move on and, hopefully, give us a long series of Benoit Blanc films.

Is there a downside? There is: No Time to Die is far too long for the story it tells. Admittedly, it has to wrap up a lot of threads since Casino Royale, but 163 minutes feels unconscionable. For all of that running time, most of the villains are essentially faceless, with the exception of a short reprisal by Christoph Waltz as Blofeld. Rami Malek is just teeth, scars, and a weird accent. His main henchman (Dali Benssalah) is just a guy with a fake eye. CIA traitor Logan Ash (Billy Magnussen) is so bland I can’t remember what he looks like. For that much time investment, I expect a little more.

And yet, there’s a lot to like. Ben Whishaw’s Q is now canonically gay, just in time for him to no longer be in the role. I have grown to respect Ralph Fiennes’s M, now much more malicious and secretive. And, of course, Naomie Harris is a wonderful choice as Moneypenny.

No Time to Die is good, and perhaps great. It solidifies Craig as my favorite Bond portrayer, which says a great deal. It’s not as good as Skyfall, but no Bond movie is. It’s on a par with some top-quality films in the series, though, like Casino Royale, Dr. No, Live and Let Die, and The Living Daylights.

Why to watch No Time to Die: It was the right way to end Daniel Craig’s run as James Bond.
Why not to watch: It’s spoiler territory. You know what it is if you’ve seen it.

Posted by SJHoneywell at 5:09 PM