Films: Tales from the Hood
Format: Streaming video from Tubi TV on Fire! 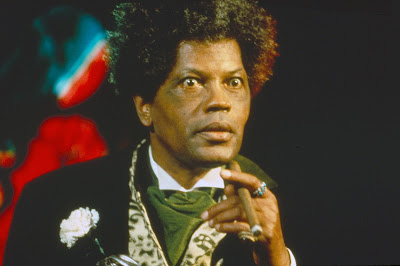 I’ve gone on plenty of rants in the past about how prevalent anthologies are in horror movies. While they are often fun, they feel so much less substantial than full-length films. That’s honestly because they are less substantial. Anthologies work for horror, though, because you can scare people in a couple of minutes and for a good horror movie, you often don’t need a great deal more than that. Tales from the Hood, on the surface, would seem to be an anthology based on Black stories, horrors with Black main characters. But it’s a lot more than that, because these are not simply scary stories, but stories that have a weight to them that I was not expecting.

Our framing story consists of a group of three gang members, Stack (Joe Torry), Bulldog (Samuel Monroe), and Ball (De’Aundre Bonds) coming to a funeral home because the mortician evidently found the gang’s drugs in the alley behind his mortuary. The gang wants the drugs back, of course, and here they are to collect. What’s going to happen is a slow walk to the stash while the mortician, Mr. Simms (Clarence Williams III) recounts stories of the people currently in the coffins around the building.

One of the strongest features Tales from the Hood has is that the weakest of the four stories is the first of the four stories. The second is surprisingly brutal, and also the story that crosses racial lines the most effectively in a lot of ways. The final two are in some ways companion pieces about racism, showing different types of racist behavior (after a fashion) and the results of the same. Our four stories are:

Rogue Cop Revelations: A few racist cops beat up a Black councilman (Tom Wright) who has gone after crooked cops across the city. They plant drugs on him and kill him, destroying his reputation (and his crusade against drug dealing officers) posthumously. A young Black rookie (Anthony Griffith) witnesses this and does nothing to help. He quits the force and becomes a drunk, but is haunted by what happens. On the one-year anniversary of the event, he calls the crooked cops to the gravesite of the murdered man because he’s been haunted to set things right.
Boys Do Get Bruised: A young boy (Brandon Hammond) at a new school shows signs of abuse and claims to be attacked by a monster. His teacher (director Rusty Cundieff) goes to his house to check things out and finds a battered woman (Paula Jai Parker) and her abusive boyfriend Carl (David Alan Grier).
KKK Comeuppance: A racist gubernatorial candidate (Corbin Bernsen) has moved into an old family house that is a former plantation said to be haunted. While he doesn’t think there’s anything to the rumor of haunted dolls, he’s going to have his own Trilogy of Terror experience.
Hard-Core Convert: A psychotic criminal named Crazy K (Lamont Bently) survives a shooting but is sentenced with life in prison. After four years, he is offered something akin to the Ludovico Technique from A Clockwork Orange to rehabilitate himself. This comes with being confronted by his many victims, both intended and unintended as well as an encounter with a racist who accepts Crazy K for doing the work of killing off Black people effectively.

I will admit that I didn’t have high hopes for this after the first story, which is clearly the weak link of the four. This played out like a supernatural version of 1970s Blaxploitation films where the Black hero finds new and exciting ways to kill off the white bad guys. It’s fun to watch, but once the revenge is over, fun as it is, there’s not a great deal left.

No, it’s the other three stories that stick with the viewer. The second is absolutely brutal. For what looks to be a fun horror anthology, this is in many ways the most horrific of the stories because it is specifically the story that feels the most real up until the end. This is truly evil physical abuse being depicted, and at the hands of David Alan Grier, an actor who often plays likeable characters. This is ugly and truly scary, more than the other stories.

The third story is once again “kill Whitey,” but it’s a lot more fun because it feels so earned, and because how this happens is so much more inventive than in the first story. It’s also notable for just how much of a racist asshole Corbin Bernsen plays. The fourth story is probably the biggest “message” tale of the four, dealing with the horrors of black-on-black crime and the reality of what that really means.

Tales from the Hood works for two reasons. The first is that while most anthologies would have one really good story and three that are just decent, this flips the script. Three of these stories are good to great, with only one feeling like it could have been a lot better. The second is the absolutely gleeful and unhinged performance from Clarence Williams III, who was never better cast than in this role where he could let his freak flag fly. He’s missed as an actor, because he was born for this shit.

Why to watch Tales from the Hood: Three solid stories against one weaker one.
Why not to watch: Honestly? No good reason.

Posted by SJHoneywell at 6:54 PM

Email ThisBlogThis!Share to TwitterShare to FacebookShare to Pinterest
Labels: horror, Rusty Cundieff, Tales from the Hood