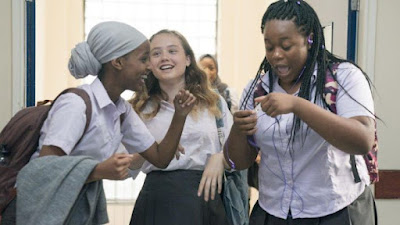 As a teacher dealing with a pandemic for the last couple of years, I’ve spent a lot of time in meetings where we are told ways that we can become more “resilient” in dealing with the needs of our students and ourselves. I recently came across a meme that essentially said that I don’t want to be resilient. I want things to be set up so that I don’t have to be resilient, so that things are handled in a way that actually benefits and helps people rather than forcing them to find new ways to be strong and handle problems. I say this because Rocks is a film where not a lot good happens to anyone.

Rocks is the nickname of Shola Omotoso (Bukky Bakray), who is in whatever the British equivalent of high school is. She has a younger brother named Emmanuel (D’angelou Osei Kissiedu) and a mother (Layo-Christina Akinlude) who sometimes disappears from their lives. This is going to be one of those times. After we are introduced to Rocks and her friends and Emmanuel, we learn from a note that their mother has disappeared and may be back again. Rocks has no one to go to for help but her friends; her father is dead and her mother’s family lives in Nigeria. Over the next couple of days, Rocks will find shelter at various friends’ houses, a motel, and anywhere else she can go. She will do all of this while being in school, trying to take care of her brother, and trying to raise enough money to survive for another day. That’s not easy since their power has been shut off and social services has discovered that their mother is missing.

There’s not a huge amount of plot to Rocks beyond what I’ve outlined above. Rocks does what she can to survive another day with her brother in the hope that their mother will show back up again. Desperate, she does what she has to, and ends up getting into fights with old friends and new. One of her oldest friends, Sumaya (Kosar Ali), lives a different life than Rocks does. She is surrounded by family, for instance. A new girl at school, Roshe (Shaneigha-Monik Greyson) befriends Rocks, but a desperate Rocks ends up stealing money from her. Rocks takes shelter with Agnes (Ruby Stokes) only to find that Agnes has talked to her parents.

There was a real danger of Rocks turning into a misery parfait, the sort of movie where nothing good happens to anyone. Fortunately, this isn’t really the case with Rocks. A great deal of this is really about the (sigh) resiliency of the girls, especially Rocks herself. It’s not inspiring to see this young girl essentially battle the world just to hang on another day. It’s depressing and maddening. It’s a reminder of just how badly the system is broken. But there is uplift here in the form of Rocks’s friends, who seem happy to gather around her as needed.

Sarah Gavron, who directed the film, did so with an essentially amateur cast of people. She wanted something that would be natural, that didn’t look staged or fake in any way, and it worked perfectly. Everyone in this movie seems like they are just living their lives and really going through what they are going through. They’re completely natural, and it’s the major thing that makes Rocks work.

I assumed for some time while watching this that I would have sadness as my main emotional reaction, but I did not. It was anger. Anger at the system, anger at the school Rocks spends time in that seems to be there just to give her and the other girls a place to mark time until they are too old to be there anymore. Anger at her mother, unable to care for her children and evidently unable to care about them. We live in world that is not broken but that has been created to break people, and there is Rocks herself, still walking through it, and she shouldn’t have to have it so hard.

I don’t necessarily choose what order to go in when it comes to Oscar movies or the 1001 Movies list each year, but it’s always nice to close out a list with something that is genuinely good. Rocks is, and I’m happy I saved it until the end.

Why to watch Rocks: This feels very close to real life.
Why not to watch: As with films like I, Daniel Blake and The Florida Project, this is a solid punch in the groin.