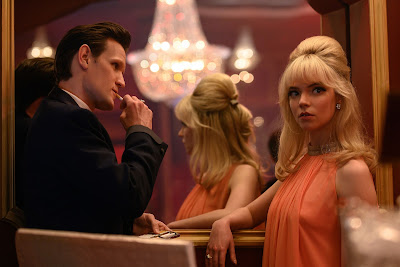 I don’t love all of the movies of Edgar Wright (I absolutely hated Scott Pilgrim), but I do tend to like them. I heard a lot of good about Last Night in Soho. It’s also worth saying that Wright doesn’t direct nearly enough; this was his first non-documentary, feature-length film in four years (thank you for the correction). So what did four years away from the director’s chair give us? I was curious to find out.

It's not immediately obvious what decade we’re going to be in at the start. We’re introduced to Eloise (Thomasin McKenzie), who is enamored of the 1960s in all things—the music and fashion especially. It’s fashion that is her passion, though, and we soon see that she has been accepted to study at the London College of Fashion. She bids farewell to her grandmother (Rita Tushingham) and heads to the big city.

Things don’t go well initially. Ellie is very much a country girl in the big city. Her roommate Jocasta (Synnove Karlsen) is snide and rude and seems to immediately turn other girls in their dorm against her. Not happy in the situation, Ellie finds an ad for a room to rent. She visits Ms. Collins (Diana Rigg in her last movie) and takes the room with a few caveats. And while things seem to get better for a short period of time, this doesn’t last.

What happens is that Ellie starts to have a series of intense dreams where she sees herself as kind of an observer and kind of in the role of a woman named Sandie (Anna Taylor-Joy), arrived in London in the heart of the ‘60s and the goal of becoming a singer. Ellie watches as Sandie meets Jack (Matt Smith) and starts her career in burlesque shows. It also turns out that Jack is less of the boyfriend that Sandie believed he was and more a pimp. As Ellie continues to have these vivid dreams, she eventually witnesses Sandie’s murder at the hands of Jack. Meanwhile, in the present day, Ellie encounters and older gentleman (Terrence Stamp) who she is sure is Jack and who also has traits that cement that truth in her mind.

Last Night in Soho turns on that blending of the two eras both in the mind of Ellie and in the experience of the viewer. Once she realizes what Sandie’s life became, Ellie begins to see images of the many men who forced themselves on Sandie in her waking life. These images are clearly these men that we see from her dreams, but are also misshapen and essentially faceless (not unlike the sleep paralysis-style monsters from Jacob’s Ladder). There are also a number of nods to Repulsion as Ellie starts lose connection between the real world and the nightmare world she has inherited from Sandie.

There’s a great deal to like here, even if Last Night in Soho isn’t perfect. I won’t go into spoiler territory, but I will say that after a particular shock moment, the conclusion of the plot before the little coda at the end isn’t too terribly surprising. It’s not that Wright telegraphs things, but that he’s not given the story a lot of other places to go.

That said, this is a visually interesting film, as most of Wright’s films are. Wright has a knack for visual storytelling (which should be true of any director, of course), and a knack for showing things that we expect to see in different ways. That’s toned down a bit here in the sense that much of Wright’s more interesting directorial choices in his films are done specifically for comic effect and we’re not going to get that here. The overall visual style of the film is taking notes from Argento’s Suspiria, though—blocks of color and monochromatic lighting. It’s an homage, and a good one.

It also doesn’t lose its touch with the fashion world. While Sandie wants to sing, Ellie is desperate to break into the fashion world, and so a great deal of the film centers around that—her own emerging fashion style and personal look as well as time in the design room with other students. Anyone who has watched a season of Project Runway will feel immediately at home amongst the mannequins and muslin.

There are also some really inventive shots. In her dream world, Ellie frequently appears in the mirror any time Sandie is near one. In the first shot where this happens, we see a coat check person take Sandie’s jacket while the same happens to Ellie in the mirror. This was done practically—the coatroom attendant was played by James and Oliver Phelps and McKenzie and Taylor-Joy did mirror work. It’s impressive and it works seamlessly.

But it’s not perfect. There are a lot of loose ends left unhemmed, if you’ll pardon the dip into fashion language. The biggest is that we never get anything like a resolution between Ellie and Jocasta. There is some with a few of the other mean girls, but nothing beyond that. Ellie’s relationship with John (Michael Ajao) works, but none of the other relationships really do. What happens with her pub job, for instance? There’s a bigger question that hits big into spoiler territory, so I won’t go into detail. But, as vaguely as I can, how are all of the crimes we learn about resolved? Not all of these desperately need to be tied up, but some of them do.

So, Last Night in Soho is stylish and good, but coming back from four years off, I expected a little more from Wright.

Why to watch Last Night in Soho: It’s Diana Rigg’s last movie and she wants you to watch it.
Why not to watch: Large threads (pardon the pun) go unresolved and untied.