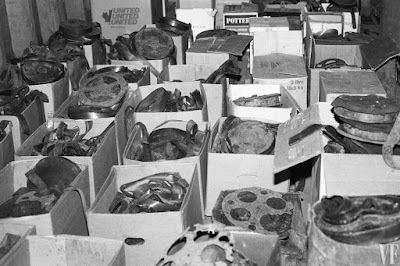 I said the other day that I commented that I was initially worried about finding Dawson City: Frozen Time, but found it at my local library. I’m not, of course, entirely sure that this will be included in the next 1001 Movies book, but it is exactly the sort of movie that seems like it should be in the next edition. It’s considerably different than I thought it was going to be. That’s not a bad thing; it’s just a true thing.

The story behind this is fascinating, and it’s the main reason to track this down. Nearly 100 years ago, Dawson City was a gold rush town in the Yukon. It was also the last stop on a film distribution cycle. What this meant was that movies would eventually show up in Dawson City 2-3 years after they were released. A new silent produced in 1917 might not show up until 1920 for the Dawson City residents. The fact that this was at the end of a distribution chain is important. Once the movies got to Dawson City, they stayed because it cost more to ship them back than they were worth. Keep this in mind.

The film tells the story of Dawson City’s role as a boomtown that became forgotten over time as the gold mines petered out and as highways linked towns a couple of dozen miles south. The film traces the history of several people connected to the city including the Pantages theater chain and a young Sid Grauman who would eventually build Grauman’s Chinese Theater. The story is told through still photography and very early movie clips. The town builds and recedes, with much of the film’s narrative covering a few key buildings in the town.

What this all leads up to is what happened with a bunch of the films that went to Dawson City. Since they were essentially abandoned by their production companies, many of the films were destroyed, burned, or tossed into the local river. But others ended up buried in a filled-in swimming pool beneath a hockey rink. Years later, new construction revealed the film canisters, but locals had known about them. Pieces of film had been sticking up out of the ground for years, and, since it was old nitrate stock, local children used to light them on fire.

Eventually, the site was unearthed, and hundreds of film reels were revealed, many of which were from films thought lost. The Dawson City find has proven to be an invaluable source of film history that includes partial copies of many films, old film reels, and even footage from the Black Sox scandal-ridden World Series.

There isn’t really a great deal more to say. Dawson City: Frozen Time is a film nerd film that will be completely unappealing to anyone who doesn’t have a sense of history or an appreciation of early film. This plays very much like a silent film for much of its two-hour running time. There is a bit of dialogue at the start and some at the end, but the bulk of the film is literally still photographs with text superimposed on them. It’s not ineffective; in fact, it’s rather beautiful, but it can be a very taxing watch because of this.

The story itself is interesting, of course, but for my money the reason to spend time here is for the footage of these ancient films. Some of them are badly damaged, as would be expected from film canisters buried under the Yukon permafrost for multiple decades, but some of the film pieces look brand new. It’s hard not to be at least a little appreciative of the work and effort to make some of these films even remotely presentable. The history is interesting as well, but it’s not nearly as interesting as the films. Because of this, I think the film is focused in the wrong direction. Certainly the history is important, but it’s the films that make this worth watching. The films are the relevant history here.

It’s hard not to like this if you have the right proclivities. If you do, Dawson City: Frozen Time is worth tracking down in the near future. If you’re not interested in mining boom towns or silent films, you’re better off going elsewhere.

Why to watch Dawson City: Frozen Time History is cool sometimes.
Why not to watch: It feels like a sideshow.