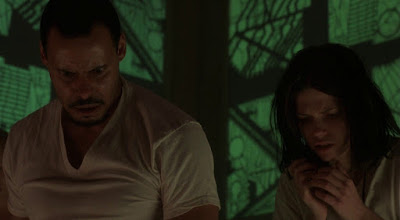 I remember watching Cube for the first time. It’s an odd film in a lot of respects. It doesn’t have a great deal of plot, or really any plot at all. It has a situation rather than a story, and a gang of characters that try to survive through the story that we’re given. It is almost purely allegorical in one way of looking at it. It could have been penned by Samuel Beckett or Jean Paul Sartre, since it is a pure existential drama. We’ll get to that in a bit.

Like any good horror movie, Cube starts with something like a scare. A man named Alderson (Julian Richings) moves through cube-shaped rooms through square doors set in the middle of the walls. The rooms appear to be identical except for the color of the walls. After a few rooms, we hear a click and Alderson stops in his tracks. Moments later, he, well, is diced by some sort of razor wire grid that snaps down from the ceiling.

That’s really just to give us the setting. What follows is a group of people meeting each other one-by-one in the same series of cubic rooms. Slowly we begin to realize some things as our group of people do. The rooms are, at least on appearance, identical aside from the color. Each has a square door in the middle of each wall, the floor, and the ceiling. As we saw with our first person, some of the rooms are trapped.

Our people are as follows:
Quentin (Maurice Dean Wint): a cop who starts to take charge as the group comes together.
Dr. Holloway (Nicky Guadagni): a doctor and a conspiracy theorist.
Leaven (Nicole de Boer): a mathematics student.
Worth (David Hewlett): an architect with a dark secret.
Rennes (Wayne Robson): an escape artist known for breaking out of seven prisons.
Kazan (Andrew Miller): an autistic man with a gift for numbers.

And really, that’s it. The group slowly starts to make some discovers at some costs. They begin to divine what rooms are and are not trapped. They also start to figure out a little bit about each other and something about the maze that they are in.

The way I want to talk about Cube requires a certain amount of leeway from my readers. So, consider the rest of this review under a spoiler tag. It might not actually get that spoiler-y, but the gist of the movie does need to be talked about, and that’s something that I think is revealed over time.

The whole point of the giant cube is that, well, no one gets out alive. It’s a hell of a lot like life in that respect. These people get thrown together and have to make their way from room to room if they can. Bad things happen to them. They cooperate and work both with and against each other. They form partnerships. They turn on each other.

One of the most brilliant moments in Cube is the reveal of what Worth did before being placed in the cube complex. It is revealed that he more or less worked on the project for some time, working as the architect of the outside of the cube. This is all that Holloway, conspiracy theorist that she is, needs to start grilling him for answers. His answer is staggeringly brilliant. There’s no one in charge. The cube is simply the cube. It was made for some purpose that has long been forgotten and now people are put inside it because if it wasn’t used for anything, someone would have to admit that it didn’t have a purpose.

It’s like the old story of the group of five monkeys. Five monkeys are placed in a room with a ladder in the middle. At the top of the ladder is a bunch of bananas. Every time one of the monkeys tries to get the bananas, all of them are doused with water. Eventually, one of the monkeys is removed and replaced. The new monkey sees the bananas and goes for it, whereupon the other four will grab him and beat the shit out of him, not wanting to get doused with water. Repeat this until all of the original monkeys are gone, and the new ones, having never been doused with water, will beat the shit out of any monkey who tries to climb the ladder without knowing why. The do it because that’s what they’ve been taught. The cube exists (or life exists, if you will) because it does and it gets used because otherwise the thing that is pointless would have to be admitted as pointless.

Existentially, it’s fantastic. Like I said, this easily could have been written by Samuel Beckett. I love that about it. I love the reveal about Quentin at the end of the second act. I love that all of the character names are connected to real-world prisons (including the Leaven/Worth tag team). But the problem with an existential film is that, well, it is a tale that ultimately can be seen as signifying nothing.

I mean, I don’t think that’s the case, but I could see someone going there.

Why to watch Cube This is a clear allegory for life, and it’s a damn fine one.
Why not to watch: Almost by definition, it’s pointless.