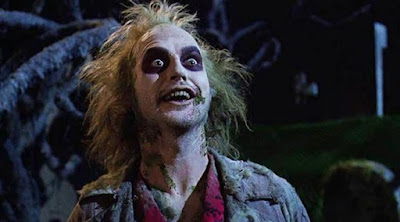 Opinions on Tim Burton are varied to put it mildly. Burton absolutely has his fanboys and fangirls who will apologize for everything he does just has he has constant detractors who will downgrade all of his work. I find it easy to be done with Burton as a director. I can’t watch a lot of him, and for the most part, I like his less Burtonesque films (Big Fish, for instance) more than his more trademarked films. I like Sleepy Hollow more than a lot of people, but I think he genuinely never did better than Beetlejuice.

My guess is that for at least some of you reading this, I don’t have to actually justify that statement any more than I already have. Beetlejuice is the just about perfect confluence of Burton’s weird aesthetic, goofiness, and humor. It’s also beautifully cast from top to bottom. Frankly, Beetlejuice is a damn joy, and I’ll fight anyone who claims differently.

So I’ll make the plot summary quick and simple. Adam and Barbara Maitland (Alec Baldwin and Geena Davis) are a happy couple living in a big house in Connecticut. A freak accident kills them both and they wind up as ghosts haunting their old house. They soon discover that they can’t leave, and the handbook they’ve received to help them understand their afterlife is difficult to follow. Still, they get to enjoy their house until it inevitably comes on the market and is sold to the Deetzes.

And here’s the problem. Charles Deetz (Jeffrey Jones) is a developer who has come to Connecticut to relax. That said, he suddenly has designs on buying the entire town. His wife Delia (Catherine O’Hara) is an artist in every sense that word could and did mean in the late 1980s. Also moving in is Lydia Deetz (Winona Ryder), Charles’s daughter from his first marriage. While he wants to keep the house the same, Delia and her designer friend Otho (the late great Glenn Shadix) have designs on turning the house into something different. Unhappy with this, the Maitlands go first to their afterlife caseworker (Sylvia Sydney) and then to our title character, Betelgeuse (Michael Keaton).

Betegeuse/Beetlejuice calls himself a “bio-exorcist,” guaranteed to remove the living from anywhere. And while he might actually be up to the task, it’s also possible that the price he wants paid is too high for anyone to pay.

Everything you need to know about Beetlejuice comes in a single scene. The Maitlands are looking to make their quiet town a little more New York, and have invited Delia’s agent and his wife (Dick Cavett and Susan Kellermann) to dinner. Wanting them out of their house, the Maitlands arrange a scare for them that involves a group dance number to Harry Belafonte’s Banana Boat song. It is probably my favorite couple of minutes from the 1980s. There is something wonderfully comic and surreal about seeing Dick Cavett lean forward into a dining room chair and shake his ass to the croonings of Belafonte at his peak.

I’ll be honest with you—I’m strongly tempted to just leave the review here. Beetlejuice, wildly entertaining, inventive, imaginative, and surreal, contains the best sequence of its decade, and surrounds that sequence with moments that are nearly as good. The late appearance of Robert Goulet as a potential investor in a museum of the supernatural is a bonus, and another dandy one along with the presence of Dick Cavett.

There are other things worth talking about, though, beyond the obviously Burtonesque trappings of the film. One of these things is the wonderful attention to detail. During the dinner party just before the Banana Boat masterpiece, Otho comments that people who commit suicide spend the afterlife as civil servants. It’s a bit of truth, apparently, since everyone the Maitlands speak to regarding their case shows evidence of being a suicide. Delia’s art, weird and potentially dangerous, appears on the cover of a book or magazine in the background of Charles’s office near the end of the film.

For as much as I love the dinner party sequence, Beetlejuice is completely owned by Michael Keaton. Keaton was a known quantity of a sort in 1988. He’d done a few movies, generally comedies, and he’d been well received in moves like Mr. Mom. Nothing up to that point in his career was as iconic as this. He absolutely commands the film despite being in it for less than 20 minutes of screen time. For a guy who has had iconic roles and starred in two consecutive Best Picture winners, for this to be perhaps his most recognizable, even more so than his time as friggin’ Batman, says a great deal.

If I have a complaint, it’s that the screenplay doesn’t really get the Goth thing right with Lydia. Ryder is fine in the role and she’s generally been a likable actor, but to have her this death obsessed doesn’t really cut it.

Still, that’s a small price to pay. Beetlejuice is the sort of film that everyone should have already seen.

Why to watch Beetlejuice The dinner party sequence might well be the greatest couple of minutes of 1980s cinema.
Why not to watch: No good reason.