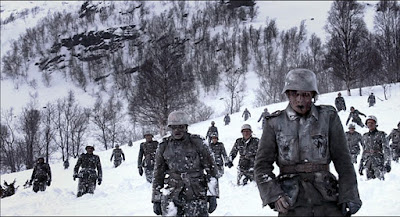 Just when you thought that everything that could be done with the concept of zombies has been done, along comes Dead Snow (or Dod Sno if you prefer the Norwegian). This is going to be a straightforward zombie film with absolutely buckets of blood in places, but there is a twist. This time, the zombies are resurrected Nazis who froze to death in the mountains. I’m sure there are other Nazi zombie films out there, but none that have received this much acclaim.

We start with a young woman named Sara (Ane Dahl Torp) running for her life through a forest. Since this is a horror movie, it’s not too surprising that she’s dispatched quickly and we jump to the titles. Following this, we meet our main cast. There’s a car with four men and one with three women. We’ll be introduced to them all and herein lies really the only problem with Dead Snow. The characters are mildly differentiated by their various quirks, but there really isn’t much to distinguish them. The men are Erlend (Jeppe Beck Laursen), the movie nerd; Roy (Stig Frode Henriksen), the horny one; Martin (Vegar Hoel), the med student afraid of blood; and Vegard (Lasse Valdal), the other one. The three women are Hanna (Charlotte Frogner), the one with the dreadlocks; Chris (Jenny Skavlan), the blonde one; and Liv (Evy Kasseth Rosten), the other blonde one. Aside from Martin and Hanna being a couple, that’s pretty much it in terms of characterization.

So, of course they’re all headed to a remote cabin in the woods for a weekend. They are forced to leave the cars a good hour away from the place. Vegard heads up to the cabin on a snowmobile while the other six follow behind. Importantly, Sara has elected to hike the distance herself, which is why she got punked at the start. Eventually everyone arrives and the party begins. There are snow fights, beer, and general partying until a stranger (Bjorn Sundquist) shows up and tells the group about the history of the place.

It seem that during World War II, a group of German soldiers occupied the area and acted as tyrants, abusing and torturing the locals. When they were forced to retreat, they took as many of the area’s valuables as they could, but the locals ambushed them, killed a few, and drove the rest into the mountains, where it was assumed they froze to death. Off goes the hiker, and soon enough he pitches camp and is slaughtered by the risen Nazis.

Meanwhile, back at the cabin, the group uncovers a cache of hidden valuables. And then the Nazi zombies (Nazombies?) start to attack. By this time, Verland has gone off to look for Sara and discovers his own cache of Nazi look (and zombies) while the six at the house are slowly whittled down by the incoming zombie horde.

Honestly, Dead Snow is pretty standard stuff when it comes to what is actually happening. There are zombies that attack people. The people defend themselves as best they can. People die in increasingly nasty ways. There are a couple of differences here from the standard fare, though. The fact that the zombies are Nazis is only the trappings.

One of the first main differences is that these are fast zombies, although we’ve certainly seen that before. What is almost unique in zombie lore, though, is that these monsters are at least partially intelligent. They don’t all just lumber forward groaning. They think and plan, and also can clearly use tools. They eschew guns for some reason, but they very much like knives. Tool-using zombies is an interesting twist.

This is also at least marginally a comedy. There are a few generally funny moments in the film, some of which work with the gore. There’s a surprising amount of intestines in this film, as well as a good amount of blood. Seriously, though, I can’t think of the last time that a horror film was this obsessed with people’s digestive tracts. There are at least three disembowelments.

But, a lot of the jokes land. There are some very good and funny moments here, and for all of its essentially being another zombie movie, there are some unexpected moments in terms of who lives and who dies. In fact, I pegged the wrong character as the putative star of this and was a little surprised when that character was killed off in an especially brutal fashion.

Dead Snow is good for what it wants to be. This isn’t trying to be high art or even particularly that scary. It’s got a touch of camp to it, and that works with the overall premise. It’s not anywhere close to the best zombie movie I’ve seen, but it might well be the best one involving the SS, or at least the best one from Norway.

Why to watch Dead Snow: Nazi zombies! Or, if you prefer, zombie Nazis!
Why not to watch: The characters are cardboard cutouts.