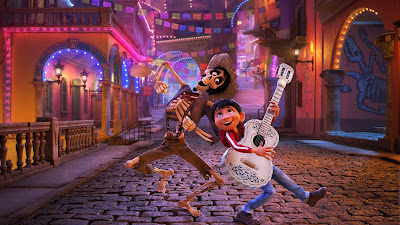 “So,” I hear you say, “you’ve still got a few movies from 2017 to finish up and the next set of Oscar nominations is around the corner.” I nod because this is true. Like I said a couple of days ago, I’ve been finding it more and more difficult to get myself to review the last three dozen or so films on my Oscars list, and pretty soon, that number is going to bump up 75% or so. That being the case, it behooves me to get as much done before Oscar nominations are announced as I can.

“You’re finally getting around to Coco,” you say, and I nod. There are times when I like to wait on the movie that actually won the Oscar. I’d hard a great deal of good things about Coco. I have to admit that I was curious about how the story was going to play out. This is a story that is very much about a Mexican holiday and Mexican culture that was not written by someone from that culture. I mean, I appreciate the fact that there’s a serious attempt at providing diverse protagonists in the modern world, but having a white guy write a Mexican story does feel a little strange.

“What did you think?” you ask. That’s a fair question. Coco is the sort of movie that trades a great deal on the story rather than the sorts of bells and whistles that many a kids’ movie uses to attract an audience. Most of the voice cast isn’t terribly well known, and the story, while it does have some comedic moments, is much more a drama than the typical children’s movie. It was also a shock to me that the title character, Coco (Ana Ofelia Murguia), isn’t our protagonist, but his ancient great-grandmother.

“C’mon,” you say. “Pixar has done movies with really old protagonists before. It’s not that unbelievable.” That’s true, but in this case, Coco really isn’t the protagonist. That role is taken by Miguel (Anthony Gonzalez), a 12-year-old who doesn’t quite seem to fit in with the rest of his family. See, generations earlier, his mariachi great-great grandfather ran away from his family and never returned. This has caused everyone in the family to turn against music. Miguel’s great-great grandmother Imelda (Alanna Ubach) began a shoe company and, since that time, the family has made shoes and avoided music. Miguel, though, loves the music of an old singer/movie actor named Ernesto de la Cruz (Benjamin Bratt). In fact, Miguel wants to emulate de la Cruz despite the music ban in his family.

“Music ban?” you ask. Yes, and that’s something I have an issue with. Everyone in Miguel’s family, especially his grandmother (Renee Victor) freaks out whenever they hear any kind of music. That just feels odd. In a world that posits a land of the dead, the idea of going through life without hearing any music is the hardest thing for me to believe. Anyway, Miguel crows up with this influence, and sneaks off on his own to play a guitar modelled after the one that de la Cruz plays. Desperate to take part in a talent show, Miguel tries to run off, but his family catches him after Miguel discovers that his great-great grandfather is Ernesto de la Cruz himself. But his grandmother destroys his guitar, and, left with no other option, he breaks into the mausoleum of de la Cruz and steals the guitar there. But the moment he plays it, it puts him into the afterlife, where only the dead can see him. And we soon discover that he only has a day—the Day of the Dead—to get a blessing from his deceased family members or he’s stuck in the land of the dead forever.

“That’s surprisingly straight forward,” you say. “Typically, Pixar gets a little more complicated than that in many of their films.” I agree, but the essential simplicity of this film isn’t a real problem. The idea of a family that never listens to music at all is a great deal harder for me to accept. I see that I’ve managed to avoid mentioning Hector (Gael Garcia Bernal), a skeleton who wants only to be remembered so he can cross into the land of the living before he is completely forgotten.

“And?” you ask. Well, Coco is good. It’s what you expect from Disney/Pixar. The characters are vibrant and truly a product of their culture without being stereotypes or racially offensive. The music is good, as is the animation, and the artwork is colorful and inventive, as is the land of the dead. The mythology works well, too. The ages just barely do, though, and I still have trouble with a family that freaks out when someone whistles a tune. It’s good, and in terms of the story, one of the more interesting Pixar films in a lot of ways, so where it is pretty straightfoward, it’s a little disappointing.

“So what the hell is with the name of this review?” you ask. That’s what Google is for, my friend.

Why to watch Coco: Representation matters.
Why not to watch: There are a few parts of this that are difficult to accept, and it’s not the supernatural stuff.