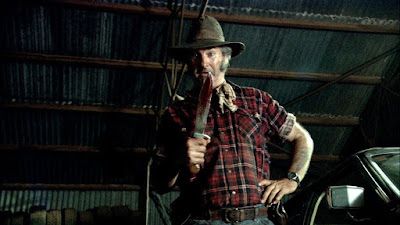 I’m honestly not sure where to start with a movie like Wolf Creek. This is a modern horror film in every sense it is possible for me to mean that phrase. While it might seem like it has pretensions of being old school in its simplicity. What I mean specifically is that this is a movie that seemed to learn something from films like The Blair Witch Project. I’ll explain that more completely.

In an interview about the movie Scream, Wes Craven said that to make a really effective horror film, you need to hit the audience immediately, and then you don’t need to hit them hard again until the ending. Wolf Creek doesn’t do this. Instead, it’s a good 40 minutes or so before our foil even appears on screen, and almost that long, more than 30 minutes at least, before anything remotely like a horror movie takes place. Almost the first half of this movie is a sort of low-budget travelogue of three young people, Australian Ben (Nathan Phillips) and Brits Liz (Cassandra Magrath) and Kristy (Kestie Morassi) driving across the Australian outback.

I’m not kidding when I say this is what the initial part of the film is about. The biggest concern we have for the first half hour is whether or not Ben actually has a girlfriend or if he’s going to end up hooking up with Liz. The group is heading across a huge chunk of Australia, making a planned pit stop at Wolf Creek, the site of a massive meteor impact. While there, they discover that their watches have stopped and their car will no longer start. When it gets dark, “help” arrives in the form of Mick Taylor (John Jarratt).

Of course, since this is a horror movie, Mick Taylor is going to turn out to be a psychopath. Under the pretext of helping the trio get their car started again, he tows them to an abandoned mine and, well, as you probably expect at this point, begins torturing them. What makes this particularly disturbing—more disturbing than it has any right to be, honestly—is that Mick Taylor doesn’t present as a psycho. He seems like a really nice guy who just happens to be homicidal.

I tend to write a decent amount on these reviews, and I’m going to say now that this one is going to be a lot shorter than normal. There’s a significant reason for that: Wolf Creek doesn’t really have a lot to say. It’s got nothing on what horror movies can or should be, nothing on the future of the genre or industry, and nothing new or original to say when it comes even to this end of the genre swimming pool. Actually, it does have a particular message, and that message is nihilism.

In his review of one of the 2005 releases called Chaos, Roger Ebert railed against the nihilism of the film. He said of the film, “The movie denies not only the value of life, but the possibility of hope.” In a way, I feel the same is true of Wolf Creek. There’s nothing to be gained from watching this. We learn nothing of the human condition, no new insight into fear or encountering that shadowy unknown. There’s just ugly violence and brutality for its own sake as three young people fight for their lives against someone who overmatches them in every possible way. It’s hopelessness on the screen, and because of that, it’s not that easy to watch.

I didn’t hate Wolf Creek, but it’s a difficult film to recommend. The first half is slow and methodical, and not much happens. The second half is just ugly and feels a bit like a snuff film. It’s not a good combination.

Why to watch Wolf Creek: It’s gotten a lot of acclaim in spite of itself.
Why not to watch: Because nihilism is depressing.