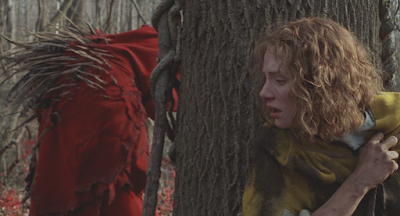 It is not without some trepidation that I enter into a film with M. Night Shyamalan’s name attached to it, especially with him as the director. His movies are hit or miss for me, and even the ones that hit (particularly Signs and The Sixth Sense) I like less than just about everyone else. Even if I liked The Sixth Sense especially more than I do, I’d have some issues with Shyamalan based solely on The Last Airbender, which is an absolute travesty of a film, especially considering just how damn good the source material is. So I can’t say that I went into The Village with an entirely open mind.

The problem with a lot (read: pretty much all) of Shyamalan’s movies is that they rely on a twist. At least that’s the knock against him. That twist ending is what worked for him in both The Sixth Sense and Unbreakable, and it’s what has more often than not been the cause of much of his downfall. We expect the twist from him now, so it’s much harder for that to work. The Village does have a twist moment where everything suddenly becomes clear and perspective changes, and, true to form, it’s this twist that damages the way the movie is ultimately perceived.

We begin in an isolated village called Covington, PA just before 1900. It is an extremely rural community, almost Amish in many ways aside from some strange habits and customs. There is nothing like machinery in the village, not even a telephone, and it is small enough that nothing like a newspaper is needed. The townspeople farm and raise animals and also have a terrible fear of the woods surrounding them.

We learn slowly that no one goes into the woods even though the woods literally surround the village. No one leaves and no one enters. The story opens at the funeral rites of a young child. Villager Lucius Hunt (Joaquin Phoenix) petitions the town elders to let him journey through the woods to The Towns to retrieve medicines that might help another child in a similar circumstance in the future. His mother (Sigourney Weaver) scolds him for this. We learn that the reason for this is that the woods are possessed by terrible, evil creatures that are attracted to the color red and that will kill anyone who tries to cross the woods. Lucius steps into the woods one day but retreats. That night, the creatures enter the town, marking the doors of several villagers with red paint and leaving a number of animals dead and skinned.

But life in the village goes on. Lucius, still concerned with what he sees as his behavior bringing a sort of doom to the village, consents to marry Ivy Walker (Bryce Dallas Howard), daughter of the town’s leader, Edward Walker (William Hurt). Ivy is blind but seems to have some sort of “sight,” being able to walk through the village easily and often knowing who is around her by being able to “see” them. This proposed marriage sits well with everyone except for Noah Percy (Adrien Brody), who is developmentally challenged. Desperate to stop the marriage, Noah stabs Lucius, leaving Lucius near death.

Now concerned that the man she loves is dying and needs medical attention beyond that capable by the people in the village, Ivy petitions to go through the woods to The Towns for medicine to save Lucius, knowing the dangers that face her from the creatures that patrol the woods.

Yes, there’s a twist. In fact, there are two twists. One of them happens when Ivy’s father consents to send her through the woods; the other happens when Ivy reaches the end of the woods. I’m not going to go into either of them. The first twist is interesting. The second, at least in my opinion, doesn’t do the movie any favors. I’d have preferred a way to work out the plot without that second twist, which I find makes a great deal of the film not work very well.

Still, The Village isn’t the train wreck that I’d been led to believe. It’s not a great movie by any stretch of the imagination, but it is at least a decent one. It’s a film with a surprisingly deep cast in small roles. In addition to the cast already mentioned, Brendan Gleeson shows up in a small role, as does Jesse Eisenberg. It’s well acted and nicely filmed overall. There is a marked sense of dread through the first two acts of the film that ultimately doesn’t work because of the ending, which is a little sad.

But, and this is important, it’s better than you’ve probably been led to believe. I liked this more than I liked Signs, and my problems with it are identical to Signs: the ending doesn’t hold up to the rest of the movie. Fix the final 20 minutes, and this would be a much better and much more memorable film. That it doesn’t live up to the premise is sad, but it’s not enough to say that the film is a waste of time.

Why to watch The Village: It’s better than you’ve been led to believe.
Why not to watch: It would genuinely be better without the twist ending.