Film: The Ballad of Buster Scruggs
Format: Streaming vieo from NetFlix on the new internet machine. 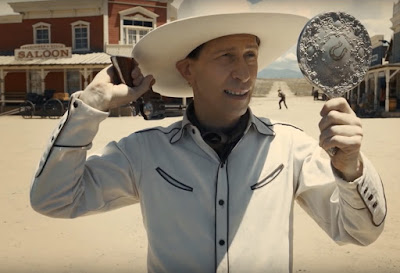 Say what you will about the new “networks” putting together movies and shows, you can’t really say that they’re not going for it. Amazon, HBO, Hulu, and NetFlix are producing television and original movies that are as good or better than the more traditional networks and studios. That these studios are starting to see Oscar nominations is indicative of this, at least in some respects. A better indication is the level of talent working on these projects. The Ballad of Buster Scruggs, nominated for Best Adapted Screenplay, was written and directed by no less than the Coen brothers, and has a cast of extremely recognizable talent, even in miniscule roles.

What I didn’t realize when I start watching—I went into it completely cold—is that The Ballad of Buster Scruggs is an anthology. This is essentially six short films in one slightly-more-than-two-hour package linked together by someone flipping pages in a book and showing us a full-page illustration of the story to come. So, it was quite a shock to me when the first story ended and we move on to a completely new story.

This blog is generally concerned more with narrative than anything else, and anthologies present a particular problem for that. So, as is my tradition, here’s a quick glimpse at the six stories:

The Ballad of Buster Scruggs: Our title story concerns a congenial singing cowboy named Buster Scruggs (Tim Blake Nelson), who also happens to be a notorious gunman. He is forced to defend himself from all-comers, including another singing cowboy (Willie Watson) who has tracked him down to challenge him.
Near Algodones: A cowboy (James Franco) is thwarted in a bank robbery by a surprisingly aggressive clerk (Stephen Root), and then finds himself in increasingly difficult situations.
Meal Ticket: An impresario (Liam Neeson) and his armless, legless actor (Harry Melling) travel across the West putting on shows to decreasing audience sizes and rewards.
All Gold Canyon: A prospector (Tom Waits) hunts for a vein of gold while being pursued by a claim jumper (Sam Dillon).
The Gal Who Got Rattled: The longest story (I think) concerns a young woman (Zoe Kazan) headed to Oregon and facing an uncertain future suddenly attacked by a gang of natives.
The Mortal Remains: Two bounty hunters (Jonjo O’Neill and Brendan Gleeson) transport a body across the prairie in the company of three other travelers (Tyne Daly, Saul Rubinek, and Chelcie Ross).

So there’s a lot to say here. I’m impressed through and through with the level of the cast. The Ballad of Buster Scruggs has actors like Clancy Brown and David Krumholtz in tiny little roles. Of course, most of the roles here are tiny, since these are short vignettes. Still, there are real benefits to being the Coens—you can get name actors for miniscule roles for a project that is essentially released on NetFlix because you’re the Coens.

There are some significant issues, though. This film was nominated for its screenplay, and a part of me understands why that happened. This is a screenplay that revels in the written and spoken word. We’re dealing with folks in the Old West, but these are poets of the prairie, with each person possessed of a vocabulary that boggles the imagination. It’s the sort of spoken prose the Coens delivered in films like Raising Arizona and O Brother, Where Art Thou? If you enjoy the dialogue in those films, you’ll like the way the characters talk here.

What’s amiss, at least for me, is a sense of connection between the stories. While they are all thematically linked in some respect—most are about death and fate in some respect—they are not linked in terms of attitude. The first story is broadly comic. The next two are also essentially comedic, but increasingly dark. The last three stories are considerably darker. Tonally, I’m not entirely sure what the Coens were going for here.

Because of this, I’m finding it more difficult than normal to draw an opinion on it. I like at least some of the individual stories, even if some of them seem needlessly dark and unpleasant. I just wish that I felt more connected to the entire series of them, and I don’t. Ultimately, I blame the first story for this. The eponymous short is so broadly comic that I expected the rest to be the same, and they’re really not. So, the second through sixth shorts don’t follow the first thematically, and that’s an unfulfilled expectation that I suppose disappoints me.

Why to watch The Ballad of Buster Scruggs: That cast.
Why not to watch: Like all anthologies, it’s uneven.