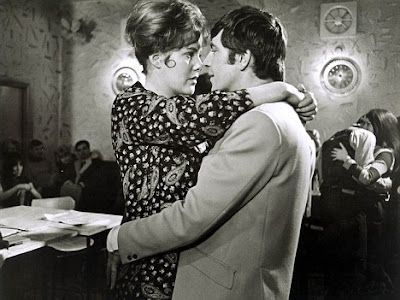 Where do I start with Georgy Girl? Lynn Redgrave being nominated for this marks one of those rare occasions where sisters competed for an Oscar; Vanessa Redgrave was nominated this year as well. I could start with it having the sort of cast most directors would kill for. In addition to Lynn Redgrave we have Alan Bates, James Mason, and Charlotte Rampling. Or I could talk about the fact that everyone in this film is a miserable piece of human shit, epitomizing the idea of selfishness to such a degree that I find it difficult to think of an equal in anything remotely calling itself a drama in any form.

Georgina (Redgrave) is in her early 20s, and while she is cheeky and seemingly worldly when it comes to things like flirting and sex, she absolutely is not. She’s still a virgin, and has never had a boyfriend, something she chalks up to her plump-ish figure and plain looks. She has grown up as the daughter of two servants of James Leamington (James Mason), a man with a loveless and childless marriage to the sickly Ellen (Rachel Kempson). He has long looked upon Georgy as something like a daughter, at least until recently. At his 49th birthday party, he propositions her, offering her a legal contract that would make her his mistress. Georgy, not really ever taking anything seriously on the surface, puts him off as best she can.

Georgy makes ends meet by teaching dance to young children. She lives in a small flat with her “friend” Meredith (Charlotte Rampling). Meredith has something like a steady boyfriend in Jos (Alan Bates), but she still dates frequently, often abandoning any plans she’s had with Georgy. In fact, she treats Georgy much like a servant, expecting her to cook and clean the flat while she does whatever she wants. In this case, it turns out that she’s pregnant (possibly by Jos—she at least gives him credit), so the two marry despite neither of them really wanting to. This would evidently make Georgy a third wheel, except that Meredith doesn’t take to pregnancy or motherhood that well, and Jos decides that he’s in love with Georgy.

Now, all of this has the set-up to be at least a potentially interesting romantic comedy or romantic drama, depending on how it’s played out. On the surface, the talented Meredith, a violinist with an orchestra, attractive and open, is the catch. But it’s plain, silly Georgy who suddenly has two very different men chasing after her, and she doesn’t have the experience or worldliness to really know how to handle the situation.

The problem is that all of these character, with the exception of Georgy herself for at least the first two acts and a part of the third, are completely self-absorbed to a degree that is difficult to describe. Meredith in particular is a miserable human being. When she does have the baby, she goes through something that would be probably called post-partum depression, except for the fact that she isn’t depressed. She’s just decided that she hates the baby, wants to give it up for adoption, and is essentially bored by the whole process. The minute she’s on her feet, she abandons everyone and runs off with another guy because, well, she was bored. I’m not suggesting that motherhood should be for everyone. I understand that post-partum depression is real and it’s serious, but that wasn’t this. This was someone deciding her child was immediately a nuisance and would interfere with her lifestyle.

And really, James and Jos aren’t any better. They claim to be in love with Georgy for whatever reason, but the love they have is entirely self-directed. Jos loves Georgy because she is willing to do what he wants until there’s a baby in the way. James appears to have more or less groomed her (or intended to groom her) from her early years. Both are creepy in their own way, and James’s “love” smacks of ephebophilia, even if it’s not quite there.

And then there’s Georgy herself. Lynn Redgrave plays Georgy like a free spirit, someone who, facing outward, has the world on a string and not a care in the world. In her quieter moments or when she is confiding in someone else, Georgy thinks of herself as plain and ordinary, someone who is special in no real way, and who acts the clown as a way to hide that opinion of herself. It’s a very good performance. Georgy is both vivacious and pitiable, often in the same moment.

Seriously, though, everyone in this film is a miserable bastard. There’s not an ounce of real human kindness to split amongst anyone who isn’t Georgy herself. Even her father comments frequently about how much of a disappointment she is to him and everyone else.

Well, at least the theme song is catchy.

Why to watch Georgy Girl: That cast!
Why not to watch: Everyone in this film is a miserable human being.