Off Script: Friday the 13th Part 2 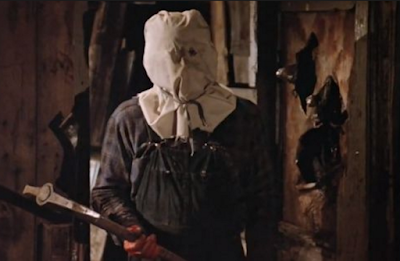 I’ve never been a huge fan of the slasher subgenre. There’s simply not enough to the films (my opinion) to warrant a lot of excitement about them. More or less they are just an excuse for a bunch of different extreme death scenes, and while I freely admit that some of them get pretty inventive, most of them aren’t. That being the case, I’ve never been a massive fan of the Friday the 13th series, because these are in many ways the quintessential slasher films. It’s easy to forget that they start slow. Jason isn’t the killer in the first movie. In that respect, Jason’s debut as the movie monster he would eventually become starts with Friday the 13th Part 2.

Because there isn’t a great deal of plot here, there’s a particular freedom that the movie has to tie up old business. To that end, about 1/7th of the running time is taking up by a preamble that concerns Alice (Adrienne King), the final girl from the first movie. Once she is taken care of, we’re going to get a great deal of set up for the new collection of victims. The story is that it’s taking place five years after the original story despite this movie coming out the next year. There’s a new camp opening up just down the road from where Camp Crystal Lake was located. Sure, the new group of camp counsellors knows all about “Camp Blood,” but no one cares. After all, the new camp is far enough away from the old one, right?

Yeah, not so much. Since Jason’s mother was killed off in the first movie and since Mrs. Voorhees wasn’t any sort of supernatural creature, we’re going to need a new killer. Those shoes are going to be filled by Jason, who will be the killer in these movies from this point forward.

This is not the Jason you might expect, though. For starters, this Jason does not wear a hockey mask. No, he’s got a burlap sack over his head that has a single eyehole cut from it. Jason also doesn’t start out life as an inventive and precocious killer. We’re not talking about running people along a table saw or dipping them in liquid nitrogen and shattering them. No, the deaths in Friday the 13th Part 2 are more along the lines of garrotings, machete slashings, and pitchforks.

As there isn’t a great deal of plot here, there’s not really a lot that I like to talk about. The story here is literally that a new camp is opening up down the lake from where all of the original killings took place. Jason shows up and kills a bunch of people in a bit of a second-act spree. The third act is dominated by our final girl and her boyfriend both running from Jason and discovering lots and lots of bodies of the already murdered.

Gene Siskel used to call movies like this one “dead teenager movies” because the plot is more or less an effort to see how many dead teenagers can be packed into the running time. While not all of the corpses in this one are teens, most are, and the body count runs to at least 8, most of them happening in that spurt in the middle of the film.

What’s really surprising is just how non-bloody this film is. Most of the deaths happen either off camera or with what would today be called the money shot happening just off screen. I’m not sure if this is because of the year of the film’s release or because of a strange sort of modesty, but anyone expecting a cinematic bloodbath is going to be very disappointed. We see the aftermath of some of the attacks, but in general, there’s not a great deal of the actual killings shown.

What this means for the moviegoer is that there’s just not a lot here. If you’re not a fan of slashers, well, this is at least the outline of a slasher movie. There’s nothing surprising or new here, and all of the scares are of the jump variety. If you are a fan of slashers, you probably are looking for heinous knife wounds and gore. You’re not going to find that, either.

In other words, the only reason for this to exist is to connect the original film to the much more brutal and higher body count films that follow.

Why to watch Friday the 13th Part 2: Jason before he was Jason.
Why not to watch: It’s exactly what you think it is.