What a Difference a Year or Two Makes

Films: Husbands and Wives
Format: DVD from NetFlix on The New Portable. 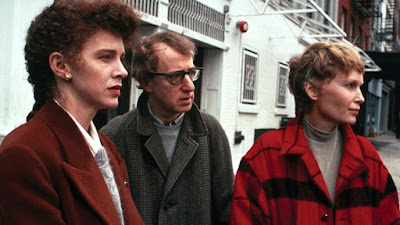 This is not going to be easy. The world changed in 2017 with the #metoo movement, something that was overdue. But that didn’t make certain aspects of this easy to handle. It meant confronting difficult and ugly truths about people who might otherwise be admired. I can’t help liking the movies of Roman Polanski despite Polanski himself being a human shit. And the same is true of Woody Allen. I don’t like all of his films, but I like a lot of them, and when I watch one I really like (say Radio Days or Midnight in Paris), I’m reminded that sometimes monsters make art. I wasn’t sure what to expect with Husbands and Wives. Now, having watched it, there’s a part of me that wishes I’d seen it three or four years ago.

The reason for that is simple—this is the sort of Woody Allen film that tends to bother me in the best of situations. The Allen I tend to like best is when he’s more nostalgic and romantic. When everything is tied up in his own libido, I tend to check out pretty quickly. Husbands and Wives is one of those movies that is entirely about marriages falling apart and people deciding to move on with their lives because their sex lives are terrible. No one is ultimately going to be edified by anything. One marriage seems strong and breaks up. One marriage seems weak and ends up staying intact. Everyone is concerned entirely with their genitals the entire time.

Maybe that’s short shrift, but it’s not far off. Gabe (Woody Allen) and Judy (Mia Farrow) appear to be happily married. They are taken aback when their friends Jack (Sydney Pollack) and Sally (Judy Davis) announce they are splitting up. Jack, it turns out, has been carrying on with a number of high-priced prostitutes and is desperate to sleep with his aerobics instructor. Sally wants to be alone, but is angered and offended when Jack is suddenly living with the aforementioned instructor, Sam (Lysette Anthony). Meanwhile, all of this has started things moving for Gabe and Judy, who start to see cracks in their own relationship.

Because this is Woody Allen, there’s going to be a great deal more going on here. Judy, wanting Sally to be happy, sets her up with her co-worker Michael (Liam Neeson), who is instantly smitten with Sally. Gabe becomes closer to Rain (Juliette Lewis), one of his students, allowing her to read his next novel. It’s perhaps noteworthy that Gabe and Rain never have anything like a physical relationship, since that’s clearly where Allen would go in most of his movies. Allen was roughly 57 when Husbands and Wives was made, and his character is sexually attracted to a 21-year-old, because of course he is. And we’re given enough of her backstory to note that she is desperate for the continued attention men more than twice her age.

I said above that there’s a part of me that wishes I would have seen this four years ago because a great deal of how I am thinking about this is clearly tainted by everything that has come up regarding Allen and his behavior of the last however many years. It’s hard to watch his character discussing marital difficulties with Mia Farrow’s, knowing what was going on in their actual lives. At one point, Judy says to Gabe, “You use sex to express every emotion but love,” and I can’t help but feel that that’s something Mia Farrow might have honestly said to Woody Allen in real life.

In some ways, Husbands and Wives was less objectionable than a lot Allen’s other films that seem to focus almost entirely on issues occurring below the waistline. While it is sex-obsessed, at least there isn’t a full-blown affair between Allen’s character and Juliette Lewis. That doesn’t change the fact that Allen regularly writes himself as being sexually desirable to women almost a third of his own age (again, he was 57; Lewis was 20 or 21).

There’s additionally a moment that bothered me personally that has nothing to do with Allen and really nothing to do with the movie. Sally, believing her husband is having an affair with a coworker, says that this coworker is herself, but younger. I went through that—my parents divorced many years ago, and my dad remarried quickly to someone who is very much like my mother, only 10 years younger and several inches taller.

I think if I had seen this five years ago, I would have found it mid-tier Allen at best. Today, knowing what I know, I find it very difficult to watch.