Off Script: The Ruins 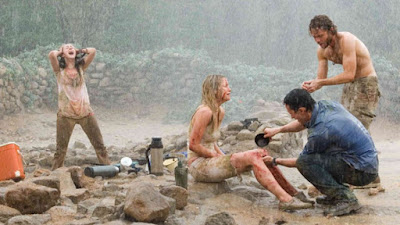 Much of the best of modern horror eschews the gross out in the main and instead aims for something truly terrifying. Gore in the best of horror movies is used for a momentary shock that enhances the rest of the film. There’s a single gore moment in It Follows, for instance, and that film is really effective. The same could be said of The VVitch. Green Room uses (mostly) realistic gore in shocking and brutal ways to enhance the claustrophobia and terror of the situation. And then you get movies like The Ruins, where the screenwriters seem to have decided that gore is an appropriate substitute for real scares. Sure, I’ll admit that seeing gross things on the screen will cause a reaction, but for me, that sort of gratuitous gore doesn’t elicit horror. Revulsion is not the same thing as horror.

A group of four American college students are on vacation in Mexico. These students come in the form of two couples: Jeff (Jonathan Tucker) and Amy (Jena Malone) and Stacy (Laura Ramsey) and Eric (Shawn Ashmore). While hanging out by the pool on their penultimate day, Amy realizes that she has lost an earring. It is returned to her by Mathias (Joe Anderson), a German who is waiting for the return of his brother, who is investigating an ancient Mayan ruin that is not on the maps.

Jeff in particular is interested, wanting to do more than just drink and hang out at the pool, so the next morning, the four head off with Mathias and Mathias’s friend Dimitri (Dimitri Baveas) in the hopes of seeing something interesting and finding Mathias’s brother. As they approach the ruins, they are discovered by a group of locals who appear to speak neither English nor Spanish. These locals are extremely agitated, and seem especially perturbed when they notice that a couple of the visitors are standing in or near the vines that cover the ziggurat. In fact, when Dimitri, after touching the vines, approaches them, they kill him, sending the other five up the steps to the top of the pyramid.

Now trapped and without cell service, our heroes have nothing better to do than hunt for Mathias’s brother. This is when they hear a cellphone ringing in the depths of the pyramid. With nowhere to go, the group lowers Mathias down into the depths, but the rope breaks and Mathias falls, injuring him badly. He is eventually pulled up out of the pyramid when our quartet of uninjured Americans notices that there is something increasingly odd about the strange vines that cover the ruin.

So, what we have with The Ruins is kind of an interesting premise. Our putative heroes are trapped with no means of communicating with the outside world and with an implacable group preventing them from leaving. One of the group is terribly injured, and it is slowly revealed that the men with the guns below are not the biggest threat to life and safety in the area, as the vines turn out to be very sinister. As I said, the premise is interesting, or at least it’s potentially interesting.

And The Ruins wastes that potentially interesting premise completely. Rather than building up some kind of atmosphere around what is happening, we’re instead going to just get a series of nasty events designed to upset the squeamish. The vines, we learn, are animated and seem to have some sort of guiding intelligence. They are also invasive in that Stacy, who injured herself going down into the pyramid, finds that the vines have wrapped around her injured leg and have pushed their way inside the wound. Poor Mathias, paralyzed and left out in the open, is discovered with his legs effectively eaten away by the vines. This sets up a sequence where our heroes have to amputate Mathias’s legs. There’s no purpose for this except to gross out the audience. There’s no plot importance to the amputation scene. It’s there just to make everyone uncomfortable, because it’s nasty and gross, and ooo, isn’t that scary?

Well, it’s not. The film does actually use the gore pretty effectively later on when Stacy, who has discovered more of the vines creeping around under her skin, decides to extract them herself. That’s the one really genuine scare in the film, and it’s only for a moment or two before the film reverts to its previous goal of just giving us gore for the shock value.

It also doesn’t help that the characters are unlikable. Jeff is kind of a know-it-all douche-bro, and Eric is slightly less so, but still kind of an ass. Stacy comes off as psychotic at times and Amy, since every film like this seems to need one, is portrayed as being the group slut. It’s implied that without Stacy’s intervention, she’d have happily paired up with Mathias, and during an argument Stacy accuses her of sleeping around frequently.

Unfortunately, that’s pretty much the summary of The Ruins. Gross things happen to unlikable people. If you can’t get enough gore, this one is here for you. Otherwise, there’s not a great deal to recommend it. Even the cool Mayan ziggurat is underused, and only a couple of rooms inside it are shown.

Why to watch The Ruins: If you’re into gratuitous gore, you’ve found your movie.
Why not to watch: It’s really hard to care about these characters.