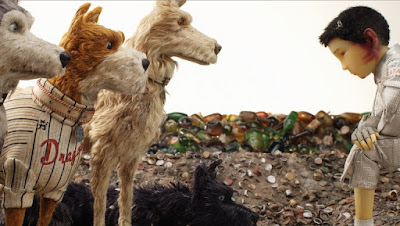 I was leery going in to Isle of Dogs for one main reason. I am a fan of Wes Anderson in the sense that I like most of his movies a great deal. Additionally, with Moonrise Kingdom and The Grand Budapest Hotel, I think he’s only getting better and better, exhibiting tighter and tighter control over his films. But I wasn’t a huge fan of Fantastic Mr. Fox, because I couldn’t figure out who (aside from himself) he made it for. And then there was some controversy about the film, so I wasn’t sure what I would think about this.

Honestly, I shouldn’t have worried. While I still think Fantastic Mr. Fox was a misstep, Isle of Dogs is the animated Wes Anderson film that Wes Anderson fans wanted. More importantly, while it maintains itself as being the quirkiest thing released in 18 months, it’s something that will genuinely work for kids.

Isle of Dogs posits a future that is stylized even for Wes Anderson. Roughly 20 years in the future, the city of Megasaki in Japan outlaws dogs. This is due in the film’s present to massive overbreeding and outbreaks of the twin diseases of snout fever and dog flu. The larger story involves the mayor of the city’s family being anti-dog and pro-cat. Using his authority, Mayor Kobayashi (Kunichi Nomura) bans every dog in Megasaki to Trash Island, the place where all of the city’s trash is sent. As an example, Kobayashi sends Spots, the bodyguard for his nephew and ward Atari (Koyu Rankin) to the island first. Conveniently for him, Atari is recovering from an accident and is in a coma at the time.

When Atari wakes up and discovers Spots is missing, he commandeers a small plane and flies to the island to look for him. When he crashes on arrival, he is assisted by a gang of dogs, all of whom consider themselves alphas. These are Rex (Edward Norton), King (Bob Balaban), Duke (Jeff Goldblum), Boss (Bill Murray), and Chief (Bryan Cranston), who considers himself a stray and defines himself as anti-master.

What then ensues is a hunt for Spots, a surprise bonding between Atari and Chief, and news from the city, where Atari’s cause is taken up by massively-afroed foreign exchange student Tracy Walker (Greta Gerwig). Making appearances as voices throughout the movie are Wes Anderson alums and others like Frances McDormand, Scarlett Johansson, Yoko Ono, F. Murray Abraham, Harvey Keitel. Tilda Swinton, Ken Watanabe, and Live Schreiber. The whole thing is narrated by the butter-smooth tones of Courtney B. Vance.

This is a Wes Anderson film, which means it’s going to be stylized to hell and back. Isle of Dogs exists in a future that will never be in the sense that the computers in this world still function with punch cards. It’s not merely retro-future, it’s very retro, very future, filtered through Wes Anderson. Anderson made the choice to not provide subtitles for the characters who speak Japanese, and it’s an interesting decision. When that choice was made for The Third Man, it could easily be seen as a choice to keep the audience as off-balance as Holly Martins. Here, I think it’s just that Anderson didn’t think it was necessary.

So let’s talk about the controversy. When the film came out, Anderson was accused of fetishizing Japanese culture. It’s not a difficult case to make. The film itself is already so stylized that the claim seems obvious. But specific choices were made here that do seem like Anderson was making the choice to fetishize Japan. Atari, for instance, wears geta, the traditional Japanese clog. The mayor is alerted to Atari’s disappearance while watching a sumo match. There are references to kabuki, anime, cherry blossoms, and haiku. As a really white guy, being in a position to defend the really white Wes Anderson isn’t something I’m comfortable doing.

But, in this case, I do want to say two things. While what feels like stereotypes come a little hard and fast in this film, some of these I think are pushing it. Sumo wrestling is popular in Japan. Would it be fetishizing American culture if a German filmmaker had a scene at a baseball game? Second, accusing Wes Anderson of fetishizing Japanese culture is akin to accusing him of fetishizing air for breathing. Anderson fetishizes everything. It’s a defining characteristic of his films.

In truth, I found this charming. Sure, it’s over the top in how it depicts a great deal of Japanese culture, and I won’t say that someone who was offended was wrong to be so. But I do wonder, then, how representation of such cultures happens if these accusations fly so easily. Regardless, the story is great, the characters are a lot of fun, and Anderson has finally figured out that there is a way to make something so odd and offbeat and make it attractive to a varied audience.

Why to watch Isle of Dogs: Wes Anderson finally figured out how to make an animated movie.
Why not to watch: Depending on your attitude, parts might be problematic.

Posted by SJHoneywell at 2:33 PM