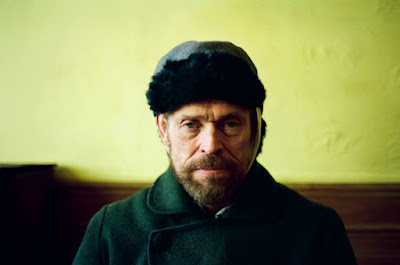 I watched At Eternity’s Gate last night and, while there was more than enough time for me to write and post a review (these normally take me 20-30 minutes), I couldn’t bring myself to do it. One of the main reasons for this is that I fell asleep in the middle of the movie. This is a rare thing; I don’t often fall asleep in a film, especially when I’m not particularly tired. This is one of those strange cases where my falling asleep isn’t necessarily a negative. There’s something about this film that lends itself to that sort of reaction.

The film is more or less a version of Vincent Van Gogh’s (Willem Dafoe) last several years. It covers his meeting Gaugin (Oscar Isaac) and their strange bromance, as well as the most productive period in Van Gogh’s life. The film also puts forth a controversial idea regarding Van Gogh’s death, which I will not spoil here. It seems to…not quite whitewash, but put a very different spin on the man’s life.

I have no idea about the reality of Van Gogh’s life and so I can’t say how much of the movie is real and believable. It posits that he received at least some critical acclaim before his death, and I don’t know if that’s true or not. I’m also not sure that it really matters that much in terms of how the plot works. It also seems to skim over his bouts of insanity, painting him (no pun intended) as simply tragically misunderstood rather than mentally ill. There are moments where the film seems to posit that Vincent Van Gogh was something of a pure spirit rather than an extremely talented and supremely troubled man.

There are some real issues here, and while I don’t think that my falling asleep is necessarily a killer for this it is at least a small problem. At Eternity’s Gate has a dream-like quality to much of it. It’s not simply slow, but pastoral and, for lack of a better way to put it, flowing. It’s a bit hypnotic in places, and that’s often going to zonk me straight out. This is a problem in the sense that I had to jump back at times and force myself to keep my eyes open.

A bigger problem is the casting. I watched this because Willem Dafoe was nominated for an Oscar for it, and while he’s very good in the role, I think he’s miscast. Put bluntly, Dafoe is in his mid-60s and Van Gogh died at 38. With the best will in the world and the softest focus on the cameras, Dafoe can’t past for 38. He might get away with mid-50s if we’re figuring some hard years. It’s kind of a shame, because it does pull me out of the film, and Dafoe is otherwise excellent in the role.

There are some additional weird choices, though. Much of the early footage of the film is done with a hand-held camera, and so it plays very much like a modern action sequence. I have to tell you that there’s nothing particularly action-like about watching a man carrying an easel walk through a field of wheat and look at the sky. And yet we have that swinging, motion sickness-inducing use of camera that makes setting up a place to paint play like a scene out of Gladiator.

There’s also a habit that pops up regularly in the film where we hear the same lines of dialogue multiple times. These aren’t specifically call-backs. It’s not like Vincent is mulling something over in his mind and recalling something said by Gaugin or his brother Theo (Rupert Friend). We’re watching him have a conversation and say the words and then we have those words immediately repeated. In fact a couple of times, the entire conversation appears to be repeated for us for no good reason. Is this to enhance our sense of his fragmenting psyche? Are we to see this as some evidence that he was particularly affected by the potential judgment of others? I have no idea.

Why to watch At Eternity’s Gate: There is a strange beauty here.
Why not to watch: It’s cinematic narcolepsy.