Blocked at Every Turn, Yeti Persisted 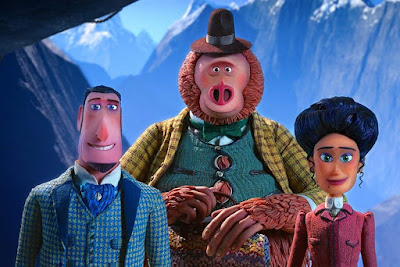 I don’t know why Laika can’t catch a break. Missing Link is the studio’s fifth movie and in many ways their most accomplished. Like all of their previous movies, it has been nominated for Best Animated Feature at the Oscars and, despite winning a Golden Globe, will almost certainly lose to Toy Story 4. For as acclaimed as Missing Link is, it’s likely it passed over you. Costing around $100 million to make, it brought in only $25 million worldwide at the box office. Laika and its movies deserve so much better than this. Missing Link deserves better than this.

We begin with Sir Lionel Frost (Hugh Jackman), who is desperate to join the Society of Great Men, a group of adventurers who are dead set against his inclusion. This comes mostly from the group’s leader, Lord Piggot-Dunceby (Stephen Fry). Unable to provide proof of his encounter with the Loch Ness Monster and suffering from the departure of his valet after that encounter, Lionel decides instead to go hunting for the Sasquatch in the American northwest. In this endeavor, he is spurred on by a letter asking him to come and find the mythical beast. He gets Piggot-Dunceby to agree to letting him into the club if he does provide proof of Sasquatch.

What we soon learn is that Piggot-Dunceby has all sorts of reasons to prevent Lionel from winning. Not only does he not want him in the club, he wants to prevent any sort of proof of a simian ancestor or relative of humanity. Yes, he’s one of those people willing to hide evidence and the truth to protect his narrative. To this end, he hires Willard Stenk (Timothy Olyphant) to kill Sir Lionel, or at least to prevent him from returning with evidence.

It turns out that evidence is quite forthcoming—the letter Lionel received was actually from the Sasquatch himself (Zach Galifianakis). What he wants is for Lionel to take him to the Himalayas where he might meet up with the yetis, and thus be among his own kind. Lionel decides that the best way to do this would be to track down his old girlfriend, Adelina Fortnight (Zoe Saldana), widow of another explorer. His hope is that she can be persuaded to give him her husband’s old map. Instead, she decides she’s going on the journey with them.

There’s a lot to talk about with Missing Link, and fortunately, most of it is positive. The story is a good one from start to finish. There are some very nice action sequences, including one on a ship that seems to hearken back to Inception in significant ways. The main theme of the film seems to be one of acceptance in any number of aspects. Lionel needs to learn to accept the Sasquatch, who eventually becomes known as Mr. Link, for what he is. He also needs to accept his own desires and what they cause him to do. It’s about acceptance in far more aspects, though—and that rejection can come from many different places and for any variety of reasons.

The animation is of the quality we’ve come to expect from Laika. While the characters themselves are perhaps a bit off-putting (the large, miscolored noses reminiscent of My Life as a Zucchini is a part of this), the animation is top-notch. There are a few places where it feels almost like the characters are moving in slow motion, which did pull me out of the film. Then again, there were places where I was no longer sure I was looking at stop motion.

So why did this movie fail so much? I don’t really know. Laika, as I said at the top, can’t seem to catch a break. Coraline was well received, as was the exquisite ParaNorman. The Boxtrolls was received less well, but made back almost double its production cost. Kubo and the Two Strings is a brilliant film hampered by an unwieldy name (I’m convinced that had it been called simply Kubo it would have been a much bigger hit). Missing Link is in many ways the culmination of all of these films. The animation is smoother in most cases, the story entertaining and genuinely funny in places. It never panders to a kid audience, but also doesn’t talk over their heads. There are no jokes about sex that the parents will get that go over the kids’ heads. No, in that respect, the jokes that work do so for everyone and are funny for the same reasons for everyone.

This is a delightful film that should have done better. I can only hope that the studio isn’t crushed by just how much money this film lost, and I can hope that the Oscar nomination gets more people to seek it out. It’s sweet and rather gentle, the lessons it provides are good ones, and Mr. Link (I will not spoil the first name he gives himself) is a wonderful naïve.

I remain convinced that what Laika really needs is better PR.

Why to watch Missing Link: It’s probably the funniest thing Laika has done as a studio.
Why not to watch: It might be the film that bankrupts the studio.