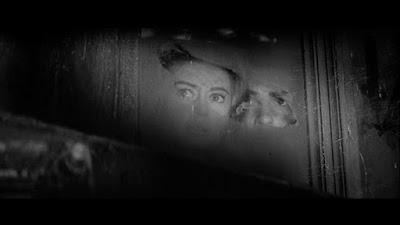 I’ve been watching a lot of weird Hammer horror movies of late thanks to a collection I got from the library. Of all of the movies in this collection, Paranoiac is probably the weirdest in a lot of respects. The basic story is mildly strange, but there are a couple of moments here that are completely inexplicable. I say that because, well, the details of them are not explained in the context of the film.

Our film opens on a sort of requiem, a pseudo-funeral for people who have been dead for years. After a little exposition, we discover that a married couple was killed in an accident years previously. A few years after that, one of their children killed himself with grief. Two children, now essentially grown, remain. Eleanor Ashby (Jeanette Scott) is emotionally fragile and appears to have been quite attached to her dead brother. The other is Simon Ashby (Oliver Reed), who is aggressive, drunken, and the sort of rich dudebro who, today, would probably drive a Hummer and wear his baseball caps backwards. Also in the picture is Harriet (Sheila Burrell), the children’s aunt, who raised them once their parents died.

Anyway, a few things soon come to light. Simon, in addition to his prodigious drinking (much like Oliver Reed himself), is a spendthrift and is being cut off from his fortune by John Kossett (Maurice Denham), the family attorney. Significantly, Kossett’s son Keith (John Bonney) shares his father’s career but not his scruples. He’s been embezzling from the Ashby fortune, something Simon is aware of. He bribes Keith for some spending money until he comes into his inheritance in a mere three weeks’ time. We also learn that Simon would love to have his sister committed, thus getting her share of the inheritance as well.

Things start to get fun when Eleanor tries to kill herself and is rescued by a man who claims to be her dead brother, Tony (Alexander Davion). Tony claims to have faked his suicide and instead run away, coming back now to look at the family home. In fact, he claims that he wouldn’t have stuck around had Eleanor not attempted to kill herself. And now things start to get really weird. There is a clear incestuous vibe between Tony and Eleanor. We also discover that Simon sometimes heads off to the family chapel to play the organ where he is accompanied by an unknown person wearing a weird and disturbing mask and wielding a hook.

Honestly, I have no explanation for this. The organ playing, the bizarre mask, the hook…none of this makes any sense at all. It’s a bizarre ritual that appears to be here just to make things as weird as possible. This ritual does more or less pay off in the end, but there were plenty of ways to get to where the movie wanted to go.

The biggest takeaway from Paranoiac is the incredibly overacting talents of Oliver Reed. He chews the scenery like he’s literally getting nutrient value from doing so. Reed stomps and yells and shouts and rolls his eyes. He smirks and giggles and romances his sister’s nurse (Liliane Brousse). Reed’s goal is evidently to be as much larger than life as he can be and still fit on the screen and he just barely manages to do so. It’s hammy as hell, and for a movie like Paranoiac, it’s perfect.

The truth is that this is a throwaway of a film that has some thematic connections to a film like Dementia 13. It has roughly the same level of budget as well. There are some pretensions here, I think, of wanting to be more than just a cheap thriller, but it’s really just a cheap thriller. Reed is the only point of class, and that point is pretty brandy-soaked.

Watch it for Reed, the hints of incestuous behavior that come out of nowhere, the gonzo ending, and that weird-as-hell mask.

Why to watch Paranoiac: Oliver Reed is pure ham.
Why not to watch: There are parts that are simply weird for the sake of being weird.