Just in Time for the Next Set of Nominations 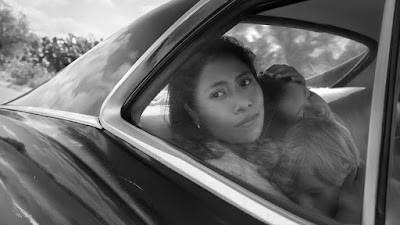 What can I say about Alfonso Cuaron’s Roma that hasn’t already been said at least a couple of dozen times. The only thing I can say that I haven’t seen anyone else say is that watching this movie completes me for my set of 2018 Oscar nominations and also finishes off the most recent incarnation of the 1001 Movies list for me. Go me! Anyway, Roma is a film that captured a lot of imaginations, but I never really heard why. People talked about it and discussed how important and meaningful the film is, but having watched it, I can’t say I was blown away. I wanted to be; I just wasn’t.

But again, what can I say about it that you don’t already know? The film gave Cuaron his third and fourth Oscars, including his second for directing. It was also the movie that seemed to announce to the world that streaming services like NetFlix were legitimate players in the movie business. There had been nominations for such movies before (Mudbound from the previous year, for instance, was also a NetFlix film), but Roma became the new poster child for telling the more traditional studios that the times, they are a’changing. Roma didn’t just get a nomination for its screenplay, after all, but also for Best Picture, Best Actress and Supporting Actress, and won for Best Cinematography, Best Foreign Language Feature, and Best Director. No other set of nominations or wins have so legitimized the streaming services in the eyes of the glitterati. Seriously, this was Oscar-winner Alfonso Cuaron working for freakin’ NetFlix!

And for all of that, I’m not really sure what all of the hype was about. I won’t deny that this is a good movie, but the story here is nothing that I found gripping or of intense importance. It’s a domestic story in a lot of respects, and a story that has been told any number of times again and again. It’s also a movie that seems to rely at least in part on the Academy’s desire to be seen as progressive and “woke” while still being very much bound to tradition. I need look no further than the nomination of Yalitza Aparicio for Best Actress to define this.

The truth is that Aparicio is good in Roma and I won’t take that away from her. She looks the part that she is to play here—there is no hiding her Aztec/Mayan heritage, and there is no real surprise that her character Cleo is working as a domestic servant for a very wealthy Mexican family who is also much less traditionally “Mexican” looking. The family is lighter skinned, for instance, and could probably pass as being from northern Spain while Cleo, who speaks both Spanish and Mixtec, looks like she was plucked off the streets of Juarez. All of this is important to believing the movie’s story.

The point is not that Aparicio isn’t good—she is. She is immediately sympathetic, and her situation (she is impregnated by her boyfriend, who then unceremoniously dumps her and denies that the child is his) is common enough and sad enough to be sympathetic as well. My point is that if this exact movie was placed in Los Angeles and Cleo’s languages were English and Spanish, I don’t think she gets this nomination. The nomination appears not to be for her and not even for the role, but for the movie and what the movie represents.

I don’t want this to sound like I didn’t like Roma. I didn’t but I also don’t really understand what they hype was about. At its heart, the story is about Cleo dealing with her own abandonment while working for a family going through a separation and possible divorce. While class comes into this at times, it’s more about commonality in that respect. But there are things here I simply do not understand. Cleo is told at one point to clean up the dog shit in the patio? Area where the car is parked? Tiled driveway? She gets yelled at, in fact, because she’d been told to do so and hadn’t yet. And there are like thirty gigantic turds—that seems like a pretty basic thing for a domestic to handle.

So, ultimately, I think Roma was fine. It is, in fact, good and potentially very good, but I hesitate to call it great. I stand by the position that, were it filmed in primarily English, set in Los Angeles, and filmed in color, it would be seen as a fine movie, but ultimately kind of forgettable.

Why to watch Roma: Apparently, Cuaron can do no wrong.
Why not to watch: It's evidence of the Academy's desire to seem "woke."