They Don't Laugh Much, Either 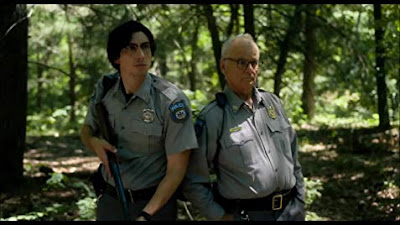 When I found out that Jim Jarmusch was making a zombie apocalypse comedy, I was more than interested. I like a lot of Jarmusch’s work, and that’s evidently not something that a lot of people are willing to say. A lot of his films have been panned either critically or by the public or both, but a lot of his films really work for me. Naturally, The Dead Don’t Die was going to be of interest to me. This checks a lot of boxes for me.

Jarmusch called in a lot of favors here, or at least went back to a lot of people who he’s worked with in the past for roles of various sizes. The Dead Don’t Die was hardly a critical darling and was panned by the public as well, but you can’t fault the cast list. The cast includes Bill Murray, Tilda Swinton, Chloe Sevigny, Steve Buscemi, Danny Glover, Adam Driver, RZA, Carol Kane, Rosie Perez, Tom Waits, Selena Gomez, Caleb Landry Jones, and Iggy Pop. I don’t think all of those folks have worked with Jim Jarmusch in the past, but a lot of them have.

Anyway, I’m not going to delve too far into the plot here, because it’s a pretty standard zombie movie. The cause of the zombies in this case is polar fracking, which knocks alters the Earth’s rotation. For whatever reason, this causes the dead to come back to life, and the people in the town of Centerville react to this in the most deadpan way possible, or at least most of them do. Because there is a huge cast here, there’s only a moderate attempt at characterization for a lot of them. Steve Buscemi’s Farmer Miller, for instance, is a racist, as indicated by his “Make America White Again” hat. Danny Glover’s Hank Thompson runs the local hardware store. We learn virtually nothing else about them because, like much of the cast of a zombie movie, these are less characters than they are cannon fodder.

There are definitely jokes here that Jarmusch wants to hammer home. A big part of that is that The Dead Don’t Die is absolutely littered with fourth wall breaks. We hear the theme song as the opening credits roll, for instance, and then when it plays again soon after, police officer Ronnie Peterson (Driver) tells Chief Cliff Robertson (Murray) that it sounds familiar because it’s the theme song. Late in the movie there are Mel Brooks-esque references to the script. I don’t mind a fourth wall break now and then, but this pushed the limits of what makes sense. There’s also a very weird subplot involving Tilda Swinton’s bizarre undertaker character Zelda Winston.

Sadly, The Dead Don’t Die is a much better idea for a movie than it is a movie. There’s a lot that could have been done with this, and the deadpan tone is something that the genre could really use. There’s something of a native Down East sensibility in how Peterson and Robertson react to everything about them. Peterson’s suggestion that it was zombies who killed the diner’s waitress and cleaning lady elicits a raised eyebrow and not much more from Robertson. Others tend to react with a bit more fear, but even in moments of extremis, when death is certain, most of the characters act mildly disappointed.

I’m honestly not sure how to react to it. It desperately wants to be funny, and while there moments here and there, most of it is closer to smirking. The humor rarely rises to the level of a genuine laugh. It’s far more clever than it is funny and those two things are very much not the same thing.

It’s disappointing overall. Jim Jarmusch is a better filmmaker than this film, or at least he has been in his other films. Almost in spite of itself, I respect The Dead Don’t Die. It’s not a badly-made film. It’s a failure, but it’s at least a completely honest failure. I think this is Jarmusch’s first attempt at a comedy, and comedy is hard.

So, ultimately, as often seems to be the case with many a horror film and many a comedy, the idea is far better than the execution.

Why to watch The Dead Don’t Die: It’s Dawn of the Deadpan.
Why not to watch: The fourth wall breaks don’t work and it’s not as funny as it could be.