Off Script: The Awakening 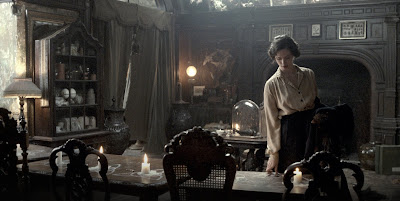 There’s a trend in movies, horror movies especially, of American remakes of successful foreign films. Sometimes, you get lucky and get a remake that gets in the neighborhood of the original, as with The Ring. Sometimes you get something at least watchable, like The Grudge. Most of the time you get crap like the remake of Pulse or Oldboy. And then you get films like The Awakening, that clearly have specific source material but do their best to hide it.

In the case of The Awakening, there are equal parts The Others and The Orphanage and a soupçon of The Sixth Sense. The overall vibe is one of the first movie. There is a definite attempt here to be upsetting and disturbing, to touch something deep in the human psyche. This is less about shocking the audience and more about crawling under its skin. Almost in spite of itself, it manages to do so at times. The connection to The Orphanage is the setting—a boarding school where most of the young boys are orphans. It’s a big, rambling house, and much of the story takes place during a break, so there are only a few people rattling around inside.

Florence Cathcart (Rebecca Hall) is an author who has made her fortune debunking mystics, psychics, and mediums in the years just after World War I. We learn over the course of the film that she was orphaned young and has little memory of her childhood. Additionally, her lover was killed in the war, leaving her essentially alone to focus on her work.

Florence gets a good deal of work debunking people, so when Robert Mallory (Dominic West), a teacher from a boarding school arrives to have her come investigate a haunting, she is less than ready to head out. Mallory eventually convinces her by showing her a series of school photos. In the first, a ghostly figure of a boy stands at one end of the line. She knows this trick, though—a boy starts at one end of the picture and then runs to the other side as the camera pans over, appearing on both sides. But the same boy appears in the subsequent years as well. In the final picture, all of the boys are accounted for, but the specter appears in the window of the building behind them. Why does this matter? Because a young boy died on school ground recently, and the other boys are now terrified.

And so, Florence heads off to the school where she works to debunk what happened. Maud (Imelda Staunton) is the only other woman at the house, and she seems particularly interested in Florence, having read her books multiple times. Florence comes to a Scooby-Doo-like conclusion for what happened to the boy who died, but she has a strange encounter herself near the lake by the school and almost drowns. Thinking that there might be more to the story, she decides to stay over a holiday break. The house is empty except for her, Robert, Maud, groundskeeper Edward (Joseph Mawle) and a student named Tom (Isaac Hempstead-Wright), whose parents are in India.

At this point, with the house empty, things start happening that specifically address Florence’s skepticism. More and more, she is confronted by the possibility not only of life after death, but that such life continues on this plane rather than another.

I said above that one of the good things about The Awakening is that it doesn’t go for the gross out. It really never does—there’s almost no blood here, and what blood there is turns out to be unpleasant, but not awful. It does, however, include an attempted rape scene that I found objectionable. There was no real reason for it, no purpose for that since it doesn’t do a great deal to move the plot along, and what happens because of it could have been easily engineered in a different way. For a film that genuinely tries to go highbrow in a lot of ways, this was a very unfortunate tonal shift.

Anyway, The Awakening is sure to disappoint gorehounds who want their horror movies dripping with blood and entrails. For those who are happy with something a little more cerebral, there are lesser delights here, but delights to be sure.

Why to watch The Awakening: It wants to be creepy more than it wants to go for the gross out.
Why not to watch: It’s lesser than its source material.