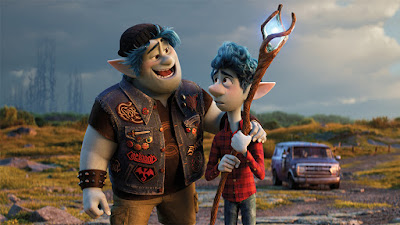 I knew from the first moment I saw the first trailer for Onward that it was going to be nominated for Best Animated Feature. Most Pixar movies get a nomination even if they don’t win. 2020 was screwed up enough that it almost makes sense that Pixar snagged two of the five nominations. My gut tells me that Soul is probably going to be the winner, but of the two Pixars, I like Onward a lot more.

Onward takes place in a fantasy realm, kind of. This is a world of elves and monsters and fantasy creatures, but it’s also fallen into the mundane. Years before, it was a world of magic, where the very forces of nature were harnessed for the good of others. But magic was hard, and technology was easy, and so magic slowly gave way to electricity, gas power, internal combustion, and the like.

Ian Lightfoot (Tom Holland) is a 16-year-old elf who, like many a protagonist, is in many ways the awkward kid at school. Ian is scared of pretty much everything while his older brother Barley (Chris Pratt) is scared of nothing. The real backstory we need on the Lightfoot boy is that their father (Karl Bornheimer) died of some terrible disease before Ian was born. Their mother Laurel (Julia Louis-Dreyfus), after a suitable mourning period, is now spending time with Colt Bronco (Mel Rodriguez), a centaur police officer. Keep your comments about him being hung like a horse to yourself; this is a family movie.

Anyway, for Ian’s sixteenth birthday, he is granted a present from his father—a wizard staff with a phoenix gem. With the right spell, the gem will bring him back for one day. Barley can’t get it to work, but magic seems to run in Ian’s blood, and the spell works for him, until Barley tries to help and it goes haywire, bringing back only their father’s legs. Now they have 24 hours to find another phoenix gem and bring their father back so that Barley can properly say goodbye to him and so that Ian can actually meet him. Naturally, this takes the form of an epic quest, “enhanced” in large part by Barley’s obsession with a “based in reality” game that appears to be a combination of D&D and Magic: The Gathering. Along the way, their going to encounter a former adventuring manticore-turned-restaurant owner (Octavia Spencer) and a biker gang of vicious pixies. And, of course, the real adventure is the brotherhood they find along the way.

Onward is a switch up from the Disney formula (an the 1980s sitcom formula) of dead mothers and gives us a dead father instead. And it does follow a sort of D&D/fantasy game path in that we’re given a quest and a number of puzzles and traps that need to be overcome on the way to it. but, because we’re dealing with young men, we’re also going to get the parental side of things in the boys’ mom chasing after them after she ropes in the manticore to help her.

Since this is Pixar, it gets a great deal right. The characters are engaging and the story is a good one. Barley is perhaps too much of a cliché when it comes to the loser older brother character and he’s very much the guy who is going to get a lot of things wrong until he gets things right at the end in his redemption arc, but he’s still a fun character. And the same is essentially true of Ian, who is in many ways the stock nerdy character who is going to end the film with new self-confidence.

And that’s probably the issue I most have with Onward. While there’s a good deal here that is fun and that works, a great deal of it really feels like a great deal of this is stock story direct from Central Casting. There weren’t a lot of surprises here. Sure, there are some fun jokes and a lot of Easter eggs, but that doesn’t make a memorable movie. Pixar is too good as a studio for this not to be a very entertaining movie, but there’s something about Onward that feels like it’s coasting.

And that doesn’t include the timeline problem. We’re told that once upon a time, the world of this movie involved magic and quests and danger, but now it’s a world of science and technology. I expected that to mean that the magic was from centuries earlier, and that it had taken ages for magic to essentially stop, for winged creatures to stop being able to fly, and the like. But no, that’s not the case. The manticore was an adventurer—someone who had magic goods and fought battles against dread creatures. It seems very strange that the entire world of the movie would have taken a shit on magic—the ability to create bridges in the air, increase the size of objects, levitate things and more—in the span of less than a generation. Ian is 16, which means his father has been dead for about 16 years, and we’re given some evidence that their father could work magic that has suddenly disappeared from the world.

I can buy a lot of things. I’ve spent enough of my life rolling 20-sided dice to be able to willingly suspend my disbelief for at least the length of a movie, but seriously, that’s a huge leap.

So, anyway, I think Soul is probably going to win, but based on the two Pixar movies that are nominated this year, I think my hopes are going to lie elsewhere.

Why to watch Onward: Pixar doesn’t make a lot of missteps.
Why not to watch: The timeline is ridiculous.