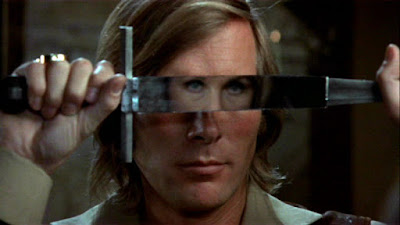 When a particular monster or monster sub-type has had a lot of play in books, television, and movies, it gets harder and harder to do anything really new with them. It does happen, though. 28 Days Later, while not technically being a zombie movie, certainly took the concept of zombie-like creatures in a new direction. Return of the Living Dead was so different from the Romero zombies that the whole “brains” narrative comes from those films, not Romero’s originals. When it comes to vampires, the differences between one version and another tend to be a lot more subtle. Captain Kronos – Vampire Hunter goes for a version of vampires that evoke the classic tales but have some significant differences as well.

It’s probably first worth noting that Captain Kronos – Vampire Hunter was intended as the first film in a proposed series of films featuring at least the two main characters. It failed in part because of the overt sexual content and in part because Hammer Studios was very much starting to falter.

Roughly during the time of the Protestant Reformation, Dr. Marcus (John Carson) contacts his old friend Captain Kronos (Horst Janson) to come investigate some strange doings. Young women of the area are suddenly aging decades and then dying. There is no explanation. Kronos and his companion, Dr. Hieronymus Grost (John Cater), who is both a sufferer from kyphosis and an expert in all forms of vampirism. As the name of the film implies, the two are professional vampire hunters. Naturally, what is happening here is going to be determined as a form of vampirism, but one that drains youth instead of blood. Along the way to visit their friend, the two rescue a young woman named Carla (Caroline Munro) from the stocks. You won’t be surprised that Carla spends a great deal of the film semi-clothed (although there is no nudity), seeing that a few years after this, she played a Bond villain henchwoman.

Anyway, Kronos, Grost, and Carla arrive to help Dr. Marcus, and the killings just keep on happening. They happen at all times of day as well—these vampires appear to be entirely able to walk about in daylight. They also seem to happen instantly. For whatever reason, when the vampires attack, time freezes. We see this at one point as a young woman is attacked in the two or three seconds she is out of sight from her lover, and winds up a dead and wizened old woman.

A lot of the film in the first two acts is pointing fingers at the natural choices for the vampires. These in specific are Paul and Sara Durward (Shane Briant and Lois Dayne), a brother and sister pair of the local nobility. There is more than a hint of incestuousness about the pair, and Sara is very vocal about not wanting to grow old like their mother (Wanda Ventham). Kronos, Grost, and Carla set up strange warning devices for the vampires, which also allows us to learn a little more about their strange physiology in this world. A vampire who walks over the body of a dead frog, for instance, brings the frog back to life. It’s this way that the trio learns how to track the vampire(s) in question.

There are some really interesting ideas here, like the variations from the traditional vampire narrative. The idea of focusing on something much closer to the idea of an energy vampire is cool, especially for a film that was made in the early 1970s (it was made in ’72, but not released until ’74). I also like the fact that it fully embraced the sexuality of the genre. Vampires have always had an air of the romantic about them, of course, but Captain Kronos – Vampire Hunter dives face-first into the sex. Not only does this come from the idea of the vampires draining youth to restore their own vitality (and sexuality, one assumes) but also from Kronos and Carla. Just as Carla spends most of the film in cleavage-revealing or enhancing outfits, Kronos is shirtless frequently.

What’s also interesting is how much this seems to rely on the idea of swordplay and swashbuckling action. Kronos is very much shown as a man of action, so much so that it’s Grost who appears to do everything but fight. In one sequence, Grost forges a new sword for Kronos—smelting the metal, forming it, forging it, tempering it, sharpening it, while Kronos literally sits in the background with a cloth over his face and his arms to the side of his head. Like all sidekicks, Hieronymus Grost does all the work, Kronos gets both the girl and the credit.

There’s such a desire for swordplay that we have a manufactured incident here where Kronos and Grost are accosted by a group of three men who seem to exist solely to act like thugs for a few minutes. They insult Grost, Kronos insults them back and kills all three with a couple of slashes. End conflict.

Sadly, for all of that desire for swords, much of the swordplay in Captain Kronos – Vampire Hunter seems amateurish. I expected a great deal more from a film that wants to have this kind of action in it.

Still, it could have been a lot worse. There are some good ideas here, even if there aren’t any action sequences that are as good as they think they are. Some fun plot points and some really interesting camera work make up for a lot of other deficiencies.

Why to watch Captain Kronos – Vampire Hunter: A different take on vampires.
Why not to watch: Bad swordplay.

Posted by SJHoneywell at 6:32 PM